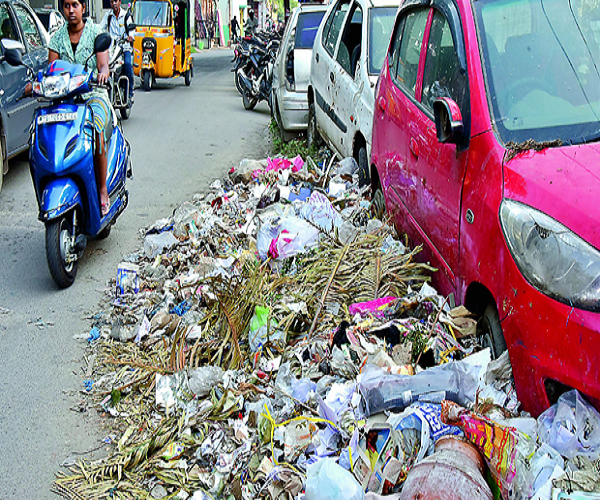 As we enter a new chapter of the Swachh Bharat Mission (SBM), a lingering question that remains is the impact of this ambitious initiative. The scheme’s aim to turn Hyderabad’s waste into a resource has seen limited success. Much is left unaddressed in terms of segregation and waste disposal.

Besides the ambitious target to make Hyderabad is open-defecation free by October 2, 2019, a primary component of the SBM Phase 1 was to achieve 100 per cent scientific disposal of municipal solid waste in all urban local bodies.

Since its inception in 2014, stakeholders have engaged with the public to create awareness and incentivise regional authorities by introducing initiatives like Swachh Survekshan, Star rating of garbage free cities and management guidelines for a successful overhaul of our waste management system.

SBM’s aim to reduce and successfully turn waste into a resource, despite its weak implementation, has seen a limited success. According to the latest SBM report, 60 per cent of wards in the City are engaged in door to door collection while 30 per cent of them practice source segregation.

This appears to be a huge improvement since 2014, where segregation was observed in only 41 per cent of wards. In spite of the positive jump in numbers, much is left unaddressed in terms of segregation and waste disposal.

Although, in reality, this practice does not guarantee successful disposal, it can be addressed by imitating cities with successful management overhauls where waste is source segregated into dry and wet waste in colour coded bins.

Despite successful door-to-door collection, a dampening factor is the downstream treatment of collected waste. Present data suggested that 51.26 per cent of total 53.1 million metric tonnes of waste generated is processed and this is a commendable improvement from the meagre 18 per cent observed in 2014.

However, without a comprehensive disposal data available, it is difficult to correctly assess the on-ground success rate of waste disposal systems.

According to the latest SBM reports, Hyderabad has the capacity to process 8.12 lakh tonnes of waste per annum (LTA) and more than 17.6 LTA capacity under construction. Utilising the available waste treatment facilities can fulfil a part of the SBM goal to convert waste into resource. However, contrary to these reports, a number of the existing facilities are non-functional.

Another worrisome trend is the irrational obsession with waste-to-energy (WTE) plants. Considering the inadequate quantity of high calorific value waste in the city, the proposed plans will have a capacity to treat more waste than Hyderabad can produce.

Instead, as an alternative, we can look at Solid Liquid Resource Management (SLRM), which is a cheaper approach to the scientific disposal of municipal solid waste. This alternative is environmentally and economically sustainable and socially significant.

For instance, in Warangal, where this approach was implemented, the SLRM offered 300 green employment opportunities, including women self-help groups and elevated financial burden by saving 52.51 per cent in solid waste management costs.

Though there has been a slow transition in Telangana’s waste infrastructure since the launch of SBM, it has not been able to fulfil the vision of making our state garbage free. In contrast, SBM was able to successfully accomplish its other objective — making Hyderabad open-defecation free.

This can be explained by the initial neglect of SBM’s other objectives, although the past three years have seen a positive change in the government’s approach in realising the SBM’s targets, as seen in the increased fund release to the SWM component to 64.95 per cent in 2018-19 from 33.39 per cent in 2014-15.

To move forward, we need to evaluate where we stand in terms of the milestones we have crossed, which is practically impossible because of the lack of data, especially pertaining to segregation and treatment of MSW.

For a successful second phase, it is essential to streamline Hyderabad’s waste infrastructure, sustain behavioural change and build capacity to implement the mission at a grassroot level. Furthermore, collaborative efforts between the central and regional stakeholders are essential for realising the potential of a nationwide Jan Andolan against waste. #KJhabarLive