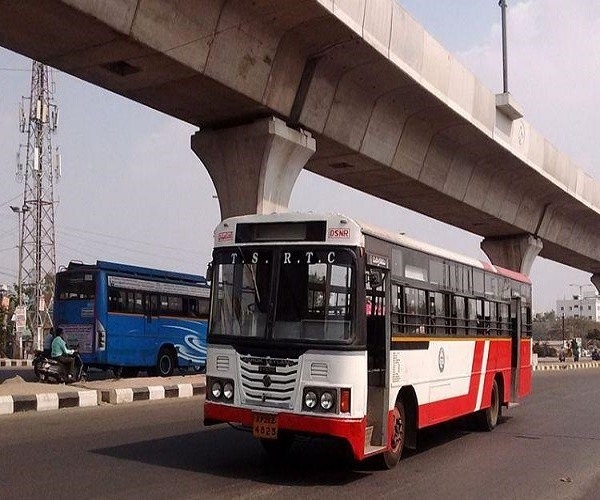 Buses of the Telangana State Road Transport Corporation (TSRTC) are seeing a drop in occupancy ever since the Hyderabad metro stretch between LB Nagar and Ameerpet was opened. To mitigate the situation, the TRSTC is now reconsidering routes along the metro stretch and may shift their services to high-density corridors that are not served by the metro.

When the Ameerpet-LB Nagar stretch opened to the public on September 24, it recorded a footfall of 69,000. Corridor-1 of the metro — from LB Nagar to Miyapur — saw 1,14,000 passengers in a single day.

The day following the opening of the LB Nagar-Ameerpet stretch, the LB Nagar metro station recorded a footfall of 10,400, overtaking Miyapur (8,100) and KPHB (8,400). The highest footfall recorded — 15,000 — remains with the Ameerpet interchange station that connecting corridor 1 and 3 said NVS Reddy, director, HMRL when speaking to media.

However, post the inauguration of the stretch between LB Nagar and Ameerpet on September 24, the Earning per Kilometer (EPK) of TSRTC along the said route fell from Rs 54 per kilometre down to Rs 42-45 per kilometre along the route for all services.

“There is a drop in EPK for AC buses since the last 15 days. Also, ridership for other services has also been weak but in the case of AC, there has been a considerable drop. We are ready with rerouting plans. We used to get earnings per km of Rs 53-54. That has slipped to Rs 42-45. This is also an indicator for occupancy ratio,” he added.

ALSO READ:  Slut-Shamed By Landlady, Thrashed By Landlord In Bangalore

The occupancy ratio and the earning for other services of TSRTC such as deluxe and metro buses have also reduced, he said. Now, the TSRTC intends to change the routes they ply.

“We are ready with rerouting plans. Taking into consideration the future plans of the metro, we have already planned to operate in the high-density corridor where there is no metro network for new and existing routes,” he added.

The increased demand for the metro has led to a drop in footfall in the two AC buses that ply on this route, that do 72 trips a day. The two bus routes (218D and 222L), from Dilshukhnagar to Patancheru and LB Nagar to Lingampally cut through localities such as Malakpet, Nampally, Lakdikapul, touching parts of Madhapur and Hi-tech city, before terminating service. The AC buses were mostly used people working in the IT sector in the city, the TSRTC official added.

For commuters using the metro to reach the above-mentioned localities, it also works out cheaper. The minimum fare in a metro is just Rs 10 from one station to the next, with the maximum fare set at Rs 60. The minimum fare for an AC RTC bus is Rs 16, and the fare could even cross Rs 80 if the ride exceeds 26 km. #KhabarLive

Why Migrant Workers Starve In Lockdown As States Sit On Huge...

Why Using ‘Recycled Cooking Oil’ Can Land Vendors In Jail?

What’s Behind The Delay Of ‘Bahadurpura Flyover’ ‘Construction’ In Hyderabad?