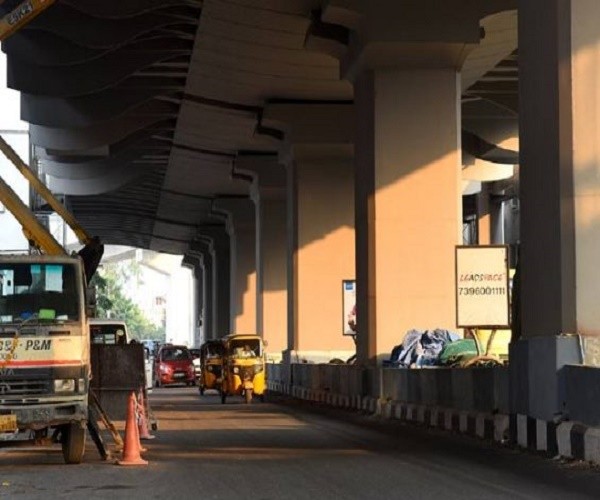 The Hyderabad Metro Rail Limited (HMRL), it appears, has not yet learnt its lessons from the past. Despite it being a necessity, many Metro pillars in the city, especially on the newly launched Ameerpet-LB Nagar section, do not have reflective stickers and are posing a threat to road users, particularly during nights due to poor visibility.

In May last year, Andhra Pradesh Municipal Administration Minister P Narayana’s son, Nishit, was killed in an accident after his car hit a Metro pillar on Road No.36 in Jubilee Hills. After the incident, HMRL had set up a committee involving transport experts and senior police officials from Hyderabad, Cyberabad and Rachakonda.

Among the various recommendations which came up, the committee members had stressed on the need to have reflective stickers on the Metro pillars as a means to alert road users and avoid mishaps.

One needs to be very cautious while driving on the Yousufguda or Krishna Nagar roads. There are quite a few ‘U’ turns and at times, it is tough to notice the sudden turn due to poor visibility. Fixing reflective stickers will alert the motorists, says Mohd. Rehman, a cab driver and regular commuter on these roads.

Same is the case at Jubilee Hills and other locations. Things can be more risky when it rains and during overcast conditions too. It is a high traffic zone and preventive measures like reflective stickers should be accorded top priority, adds Vignesh Rao, a private firm employee.

A police official from the City Traffic Police said the issue was taken up with Metro officials a few times, asking them to fix the stickers but things have not yet changed. A senior Metro official says efforts are being made to fix reflective sheets on the pillars from Ameerpet to Khairtabad and Ameerpet to Hitec City. “We are roping in private agencies to execute the works,” he said. #KhabarLive

‘Khaan Paan Dhukan’ Of Sankalp To ‘Educate A Girl – Educate...