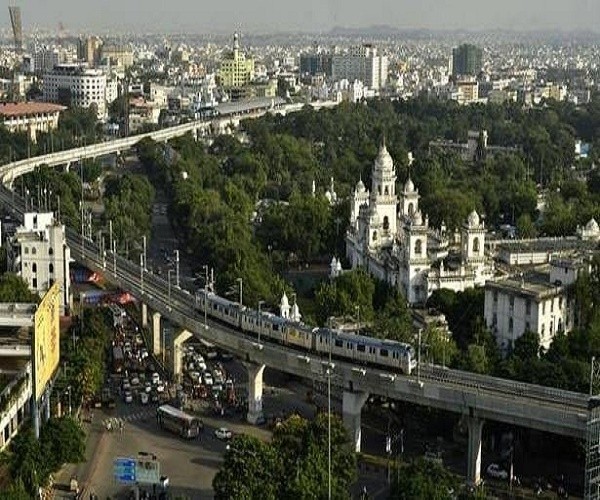 Telangana Governor E.S.L. Narasimhan flagged off the metro train from the Ameerpet metro interchange station towards L.B.Nagar in the city suburb just after noon on Monday.

With the opening of this 16 km stretch, the entire Corridor One of Hyderabad Metro Rail (HMR) project of 29 km from Miyapur to L.B.Nagar has been completed.

It will be the first corridor to be completed in all respects and has been opened to general public by evening. Construction is underway in two other routes: Corridor Two – Jubilee Bus Station to Mahatma Gandhi Bus Station (Imlibun)/Falaknuma – 15 km and Corridor Three – Nagole to HiTec City/Raidurg – 28 km. Altogether 72 km of elevated metro line is being built in three dense traffic corridors of the capital.

Last November, Prime Minister Narendra Modi had opened the inaugural 30 km metro line of Nagole-Ameerpet-Miyapur in the presence of Chief Minister K. Chandrasekhar Rao and others. It covered parts of Corridor Three – Nagole to Ameerpet (17 km) and Corridor One – Miyapur to Ameerpet (13 km).

More than a lakh passengers have been riding on the trains and it is expected to double now.

With Monday’s opening of another metro stretch, the Hyderabad Metro Rail will be covering 46 km and has become the second largest metro rail network in the country after New Delhi, announced Minister for Municipal Administration K.T. Rama Rao during a presentation made to the Governor at the terminal station of L.B. Nagar.

It is also the world’s largest public-private partnership project. The Government spent close to ₹3,000 crore for land acquisition, road widening and shift of utilities, while L&T Metro Rail Hyderabad (L&TMRH) invested more than ₹12,000 crore. The Central Government too chipped in with Viability Gap Funding (VGF) of ₹1,458 crore. The entire work has been estimated to cost up to ₹14,132 crore.

The Minister said HMR was also taking care of improving ground level infrastructure all along the metro corridors like designer footpaths, drains and signages while barricading is being taken up underneath stations to prevent spillover of passengers onto the main road. Skywalks are in the offing and all metro stations could be used as road crossovers. Frequency of trains is about 7-8 minutes and first train chugs in at 6.30 a.m. and last train 10.30 p.m.

First and last mile connectivity is being provided through bicycles, bikes and taxis. Soon electric charging points will be provided for bringing in electric vehicles into its fold, he added. The Governor commended the project and requested the citizens to make use of the facility for the sake of personal health and environment. He called for speedy induction of smart card/smart phone ticket facility and opening of HiTec City line by Dec.15.

Mr. Narasimhan after travelling from Ameerpet to L.B.Nagar, got down at Khairatabad and cycled towards Raj Bhavan along with other senior officials. Mayor B. Rammohan, Chief Secretary S.K. Joshi, HMR MD N.V.S. Reddy, L&TMRH CEO & MD K.V.B. Reddy and others were present. #KhabarLive

‘Serlingampally Constituency’, The ‘Richest’ And ‘The Best’ In Telangana State