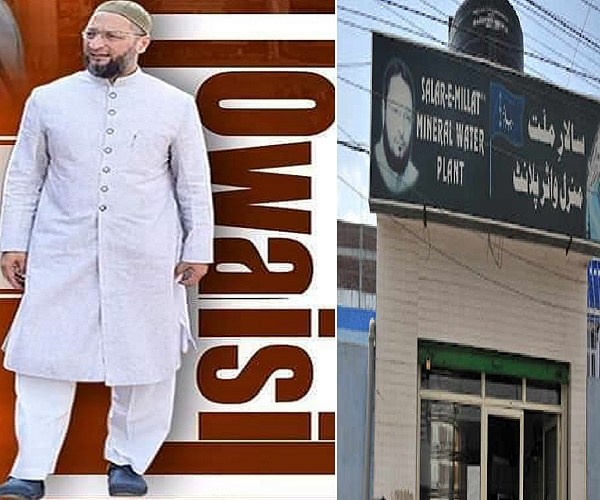 The much-hyped Salar-e-Millat mineral water plants (set up in memory of late Sultan Salahuddin Owaisi) in Old City, where locals queue up to collect drinking water, has much to do with MPLADS funds and state of drinking water supply in areas south of the Musi. Ground verification and analysis of MPLADS funds by Hyderabad MP Asaduddin Owaisi revealed how Old City residents were depending on reverse osmosis plants funded by the MP rather than HMWS&SB water.

Of the ₹27 crore funds (₹5 crore per annum with interest in past five years during 16th Lok Sabha term), Owaisi spent most money on cement-concrete roads, sewer pipelines and reverse osmosis plants, highlighting failure of civic bodies GHMC and HMWS&SB. #KhabarLive went around Hyderabad constituency and verified a few of the works.

Owaisi, who was at second spot among 17 Telangana MPs in terms of spending MPLADS funds, had initiated 279 works, including 72 for laying CC roads, 47 sewer pipeline laying and 21 RO plants. Residents in Hyderabad LS constituency were buying water from these RO plants at rate of ₹ 3 per 20 litre rather than drinking ‘contaminated’ water supplied by HMWS&SB.

Owaisi had released ₹4.5 lakh for sinking borewells with submersible motors and installation of static water tankers with necessary fittings at government dispensary near Florida School in Talab Mir Jumla.

Abdul Khader Nizami, a resident of Yakutpura who came to collect water from an RO plant, told #KhabarLive, “HMWS&SB supplies water once in two days, that too contaminated due to which the kids fall sick regularly. We have to depend on RO plant for safe water.” Mohammed Zaheeruddin, a resident of Amanandagar, claimed, “Hundreds come to these RO plants to buy water.”

Owaisi funded at least 21 RO plants in past five years. AIMIM MLC Syed Amin Jafri told TOI, “The Nizam-era pipelines suffer breaches, resulting in contamination of water supplied by the civic body. Former CM YS Rajasekhara Reddy had announced an Old City package for changing the pipelines, but after his death, the project didn’t go ahead.

HMWS&SB has no money even to change manhole covers and it focuses more on capital expenditure. For sewer network in lanes and by-lanes, we are spending money from both MPLADS and MLA and MLC constituency development funds.”

About CC roads, Jafri said, “GHMC doesn’t have money for maintenance. It proposed a budget of ₹7,661 crore, but it spends only ₹3,300 crore per annum.”

GHMC commissioner and HMWS&SB MD Dana Kishore told #KhabarLive, “We spend a few hundred crores on CC roads from GHMC budget. MPLADS is only ₹25 crore and we have three MPs in the city. We maintain more than 10,000 kilometres of roads in the city.” An HMWS&SB official said, “HMWS&SB supplied water is pure. RO plants, while processing water, remove most minerals.”

On the other hand, Barring Mahabubabad MP, most lawmakers from Telangana have spent funds (₹5 crore per annum) allotted to them under the Members of Parliament Local Area Development Scheme (MPLADS) by recommending works to implementing agencies. However, district authorities failed to produce audit and fund utilisation certificates, leading to delay in release of funds from the Centre.

In almost all 17 Lok Sabha constituencies in Telangana, utilisation certificates (UCs) and audit certificates (ACs) were pending. The Union ministry of statistics and programme implementation has observed that funds were not released due to non-furnishing of requisite documents by the nodal district authority. In some cases, faulty UC or audit certificates were submitted.

The four MPs from Greater Hyderabad region had spent funds beyond their sanctioned limit, above 100%. Around ₹49 crore was the unspent MPLADS funds in the 17 constituencies in the state. Mahabubabad MP, who represents the tribal belt of erstwhile Warangal district, was lagging behind other MPs in terms of spending MPLADS funds.

As per the rule, 15% of the funds should be spent on SCs and 5% on STs. Then Malkajgiri MP Ch Malla Reddy (now a minister in the TRS government) had asked the Centre to allow him to divert funds for general category, stating there were no ST population in his constituency. The Union government, however, rejected his plea and instead directed him to spend funds in tribal areas (outside his constituency) in the state.

“In case there is insufficient tribal population in the area of MP, he or she may recommend the amount for creation of community assets in tribal areas outside their constituency, but within their state of election. In case a state does not have ST inhabited areas, this amount may be utilized in SC inhabited areas and vice-versa,” the Centre told Malla Reddy.

The Centre has extended the scope of the scheme by adding up purchase of tricycles, wheelchairs and artificial limbs for differently-abled and deserving persons with disabilities, and also equipment for visual and hearing impairment.

The ministry of statistics and programme implementation officials revealed that over ₹48,000 crore was disbursed under MPLADS since the launch of the scheme in 1993-94. The ministry had received several complaints from MPs that district authorities were not taking adequate interest in executing works, recommended by them, under MPLADS. Nodal departments of states were blamed for not paying attention to the scheme.

The states were told to establish a facilitation centre for MPs at the district level. Ironically, in states like Andhra Pradesh, Odisha and Bihar, some works dating back to 2004 were yet to be completed. Sanga Reddy and Khammam districts in Telangana were ahead in online management of fund utilisation. #KhabarLive