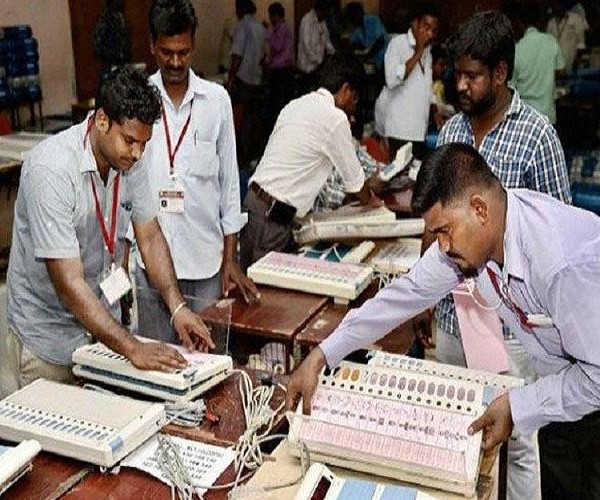 The Election Wing of the Greater Hyderabad Municipal Corporation (GHMC) took strong objection to comments made by Congress leaders Marri Shashidhar Reddy and G Niranjan, who alleged that the municipal body had violated rules laid down by the Election Commission (EC), and issued a rejoinder on Monday to the claims made by the political leaders.

Reddy had alleged that the GHMC opened the strong room at Chudi Bazaar in Hyderabad’s old city area and locked it after receiving Electronic Voting Machines (EVMs) and Voter Verifiable Paper Audit Trails (VVPATs) without making a video recording of the same as per guidelines.

They also alleged that short notice was given to them and officials had opened the strong room and locked it again before they even reached the godown. Stating that there were many complaints on EVM tampering, the Congress leaders had also demanded that the elections should be postponed as they were not satisfied with the final electoral rolls that were published on October 12.

In its response, the GHMC said that on October 13, “information was given to all the political parties right from 10:30 am onwards, by giving the schedule time of opening of strong room at 12:30 pm. In response, the political representatives requested for some more time in coming to Victory Play Ground for their presence. Accordingly, the time was revised to 2 pm.”

The GHMC stated that officials waited till 2:30 pm and as none of the representatives of political parties except the BJP, had turned up, they went ahead with the process.

The statement issued by the municipal body was signed by GHMC Commissioner and District Election Officer Dana Kishore.

The Telangana Rashtra Samithi (TRS) government on September 6 had recommended dissolution of the Assembly to pave way for early elections and the same day Governor ESL Narasimhan accepted the recommendation.

Following this, the Election Commission announced the schedule for the Assembly elections in Telangana. As per the schedule, the polling will be held on December 7 and counting would be taken up on December 11. #KhabarLive