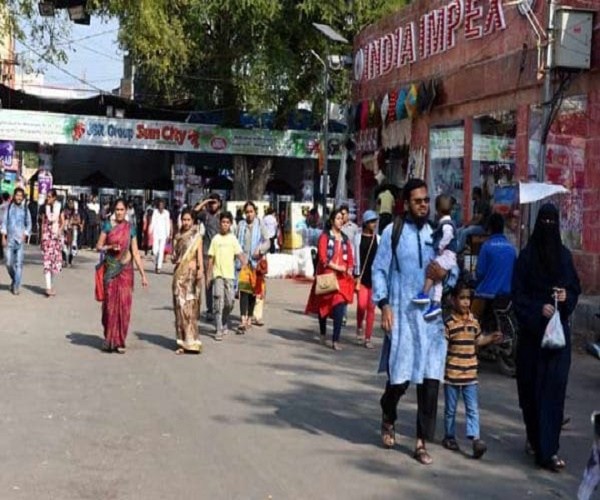 Hyderabad Numaish is back again. The hungry flames that tried to reduce the annunal exhibition to ashes have done nothing to deflate the spirit of the 79-year-old event, which apart from offering entertainment to lakhs of visitors every year, is also a means of livelihood for many. This was evident on Saturday when the gates opened after the devastating January 30 blaze.

Though nearly 300 stalls were gutted on that fateful night, the enthusiasm of visitors and stall owners appeared to be as high as ever with many flocking to the Exhibition Grounds at Nampally soon after it reopened at 3 pm.

But, there was still no clarity on a possible extension of Numaish, which otherwise culminates on February 15 every year. An Exhibition Society member said traders were demanding the event to be kept open till February 28. “We wrote to the government and are awaiting instructions. If it is extended till the month-end, permissions have to be obtained again from different departments,” he said.

Stall owners, who lost their stocks in the fire, were still apprehensive about the financial assistance they were seeking. They wanted the society management to clear the uncertainty. “It is good that a few stall owners returned the stall rents, but there is still no firm announcement on the compensation to be paid,” Musharaf Ali, a Kashmir trader who set shop at Numaish, said.

Even as visitors came in droves, the damaged stalls were still being repaired and restored at a brisk pace. However, the traders did not appear convinced. “I need to get stocks on credit and sell them to clear the credit, forget about losses suffered in the fire,” said a stall owner from Rajasthan.

On the other hand, a few arguments broke out among some traders over reopening the stalls. While, one section, especially those from Kashmir, wanted to shut the stalls till the air was cleared on compensation, others wanted the stalls to be open and business to go on as usual. “We definitely understand the pain of stall owners who lost their stocks, but they should also realise and think about our situation too. We invested a lot and hired people in the hope of good earnings,” said Parvez Khan, a stall owner from the city.

A few stall owners also said banners and posters would be set up appealing visitors to donate money to help the affected traders. Apart from these, as the sun set and the lights began to shimmer, the ambience at Numaish appeared as beautiful as it always was.

All assurances have been made to stall owners, who suffered losses in the fire accident on Wednesday about the compensation to be paid to them.

The Exhibition Society assured visitors and exhibitors that all necessary steps were taken in consultation with various government departments to further strengthen measures to ensure a safe and pleasant experience at Numaish, Nampally.

In addition to this, all assurances have been made to stall owners, who suffered losses in the fire accident on Wednesday about the compensation to be paid to them.

Apart from the Revenue Department, which is assessing the loss suffered due to the fire, the society also constituted an internal three-member committee for the purpose. This apart, efforts are also being made to extend some assistance from the government as well.

After the Numaish was reopened from 3 pm on Saturday, the focus was on fire safety measures. Stall owners were also instructed to set up fire extinguishers at their respective stalls.

Further, the society members were also working on setting up small fire extinguishers and water drums as a means to take up firefighting operations effectively and immediately, in case of any fire mishap.

Society Secretary GV Ranga Reddy said the fire accident had occurred at about 8.40 pm on January 30. All the visitors were evacuated safely without any stampede and within two hours, the fire was brought under control. Less than 10 per cent of the stalls (130 stalls) were damaged in the fire.#KhabarLive

What’s In The ‘Mind Of KCR’ To Call ‘Early Assembly Elections’...

Definitely The Congress’s New ‘Hindu Strategy’ Will Misdiagnosed The Improvized...