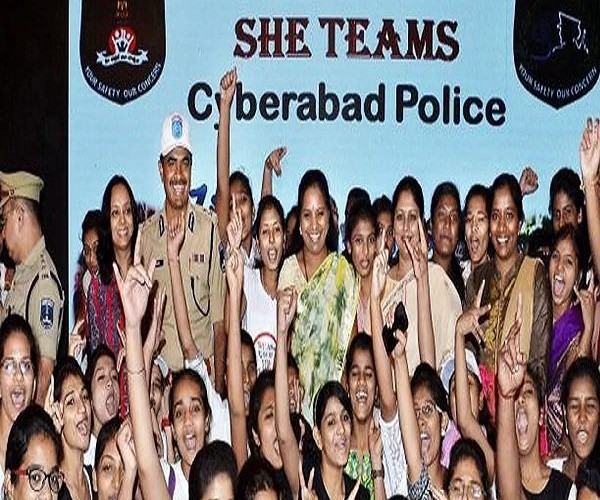 SHE teams and Bharosa – the power and armour of a woman, a blessing in disguise, both work for women empowerment. SHE team with a slogan – for you with you always and Bharosa – a supporting centre for women and children, the initiatives of Hyderabad city police provide rescue and referral services to the women affected by violence in private and public spaces, with the family, community and at the work place.

SHE stands for Safety Health and Environment. The division was started on October 24, 2014 conceptualised by Telangana CM K Chandra Shekar Rao , who was inspired by a similar initiative in Singapore.

SHE team was inaugurated by DGP Sri Mahender Reddy ,Swathi Lakra, IPS., erstwhile Additional Commissioner of Police heading the division since inception . SHE teams are a division of Telangana Police for enhancing safety and security of women .

The team deals with offenders booked under petty cases like Sec 290 IPC and Sec 70(c) of the Hyderabad City Police Act . Repeat offenders are likely to booked under 509 IPC (modesty of women , 354 IPC outraging modesty ,376 IPC rape . Recently they held a summit at Ravindra Bharathi , regarding SHE team awareness programme.

The cases related to the harassment of women under Rachakonda Commissionerate has come down by 85 per cent. She shuttlers Margadarshak connecting sessions are providing to be effective in curbing the crime rate. In Hyderabad there are 100 teams in operation . The division is working in Adilabad and Nizamabad and will expand to other districts of Telangana .

The team works in a small groups to arrest eve teasers stalkers and harassers, they operate mainly in busy public areas with its teams ,a team comprises an Assistant Sub- inspector ,who acts as a lead with four or five male or female constables in civil dress in each zone ,they all work under Assistant DCP rank women police officer regarding the cases related to harassment of women in all the districts of Telangana and zones of Hyderabad. The Millennium Development Goals (MDGs) of the United Nations in 2000 committed to help achieve the eight MDGs also highlights to promote gender equality and empower women.

ALSO READ:  Many Issues With The Fastest Corona Vaccine Trails

These words may seem very routine but have been great hurdles for women which needed little support and easily accessible where a woman can handle herself with the cooperation of police to make herself confident, more aware regarding the police system which makes her feel empowered.

By this, she can easily manage to adapt to the existing system. The existing SHE Team in enriching the dignity of women thus deserving a salute for rendering a unique and most remarkable operation as a light house and earning the gratitude of all working for women fraternity. #KhabarLive