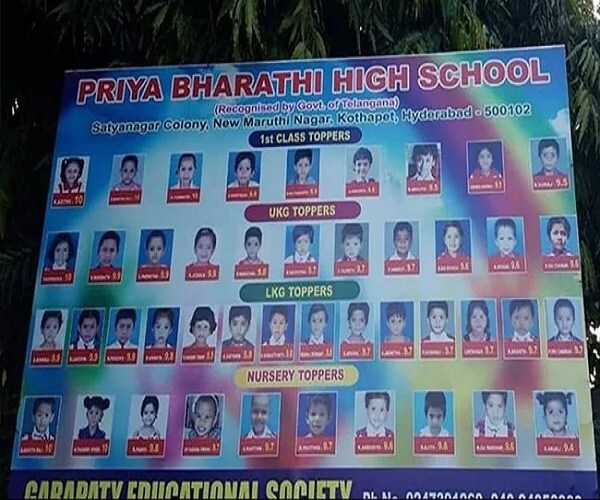 Infuriated netizens called out school authorities unnecessarily putting kids under pressure. A Hyderabad school which erected a hoarding on its premises with the “toppers” of Nursery, LKG and UKG classes, has come under criticism after a photo of the hoarding went viral on social media.

Pushing toddlers into the rat race, Priya Bharathi High School in Hyderabad has put up elaborate billboards of the nursery, LKG, UKG and first-grade toppers in the city. The images were first shared on Twitter by Krrish Yadhu which later enraged netizens commenting on how children are being forced to compete at such a young age.

G Sundar Babu, correspondent of Priya Bharathi High School, however, says that the school was only catering to the requests made by the parents. He tells #KhabarLive that they’ve been flooded with calls for the past two days, mostly abusive ones.

“We had erected the hoarding with a good intent, at the insistence of the parents. We did not know that it would take such an ugly turn, and that we would be abused for it,” he says.

According to Babu, the school has less than 200 students, who mostly come from underprivileged backgrounds. Babu claims that apart from the hoarding of top rankers, they had erected hoardings of children who had achieved success in other arenas as well.

“We celebrate the success of all the students equally, we had erected hoardings about sports too, but this one hoarding has been shared selectively to malign us,” he alleges.

While the school may believe that it has been unfairly targeted, the hoarding has opened up the debate once again on the pressure that children are subjected to by schools, parents and society at large.

The practice of erecting hoardings to celebrate the success of toppers has become common and Priya Bharathi High School is hardly the only educational institution to do so. Several schools and colleges in the city – elite and otherwise – put up posters and even publish advertisements in newspapers about the success of their students in examinations. So much so that it has become a parental aspiration cutting across social classes.

Sowjanya, a parent whose child goes to Priya Bharathi High School, confirms that the school had indeed put up the hoarding only after requests made by the parent body.

“Yes, it was we who insisted on the hoarding. When Class 10 toppers are celebrated with hoardings publicising their success, what is wrong in our children getting similar fame?” she asks.

Sowjanya further adds that the school has been carrying out the practice for the past three years.

However, the price for social validation can be heavy. Speaking about the trend, Padmaja Shaw, academician and journalist says, “It is a perverse trend, and the parents are responsible for such things. At a young age, children are taught to aggressively compete, instead of teaching them the basic values of sharing and respecting each other.”

She points out that such conditioning can even result in suicides, when young people are unable to live up to society’s expectations.

“At an early age, children create their own self-image which has been conditioned by parents and others. When their image does not match with their future capabilities, they are pushed into depression and even suicide,” she says.

In April this year, just a couple of months before the controversial hoarding was erected, 22 students in Telangana killed themselves after the Intermediate results were announced.

“Kids are introduced to a vague concept of what is success and what is failure by parents. What parents are doing is nothing but exploitation. What they couldn’t achieve, they want their children to achieve it for them,” says Padmaja.

Sharmila, a teacher at Lab School, a concept school in Hyderabad which doesn’t encourage any sort of competition among students till the age of 8 years, says, “Until the age of 8, children are extremely vulnerable. So we don’t make any comparisons with other students. We don’t pressure them, and the motivation is also indirect.”

The Lab School is run by the Durgabai Deshmukh Trust and was set up with the aim of educating the underprivileged for a nominal fee. The school has classes up to Class 4.

Noting that comparisons at a young age can mentally disturb children, Sharmila says, “A healthy environment where they can explore their own interests and abilities should be created.”

After facing severe flak, the correspondent of Priya Bharathi High School has decided to pull down the hoarding and avoid the practice in future. But the question remains – will other educational institutions follow suit? #KhabarLive

Why Nizamabad LS Constituency In Telangana Forced To Use On ‘Ballot...