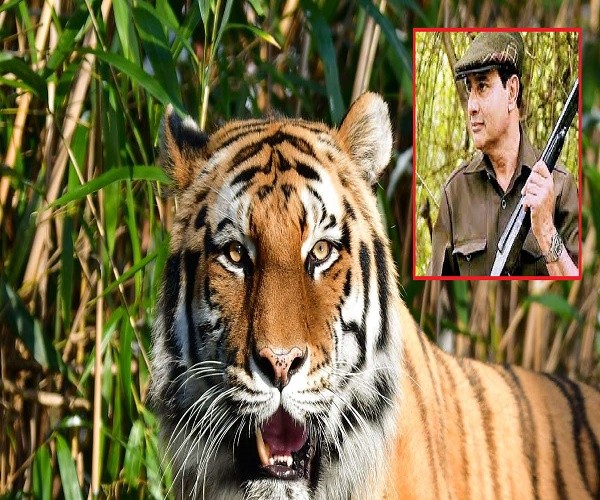 Hyderabad’s own ace-shooter with a licence-to-kill, Nawab Shafath Ali Khan is on his way to Yavatmal district in Maharashtra, armed with an order to tranquilise a 4-year-old tigress and her two 10-month-old cubs. The order copy from the Chief Conservator of Forests, Yavatmal, suggests elimination of the man-eater tigress as a last resort to prevent any further human loss. The tigress named T1 from Pandharkawda has in the last 18 months killed 14 human beings.

This is first of its kind order in the country. The tigress name T1 from Pandharkawda has in the last 18 months killed 14 human beings. A first of its kind mercy petition too, to save the tiger, was heard at the Supreme Court today and the authorised shooter from Hyderabad has been given a green signal. The SC on Tuesday rejected the mercy petition and upheld the order of Nagpur HC to shoot the man-eater tigress.

The Nawab, who is also secretary of Hyderabad-based Wildlife Tranqui Force (WTF), spoke to Express from Pandharkawada, said all his efforts would be to bait the tiger and her cubs to a safe place and tranquilise them and move to a rescue centre.

“The adult tigress is four years old and has taken 14 human lives so far. The last of the three incidents of human loss were reported in the last one month. The cubs too were found feeding on human meat in last instance and there are all chances of them turning into man-eaters,” said the sixty-year-old.

Calling it one of the most dangerous operations, the conservationist will be using his 470 double barrel rifle and dan-inject tranquilising gun on the tigers.

Based on physical sightings, pug marks and camera traps, a proposal was sent from the deputy conservator of Forests (Pandharkawda) to invoke section 11(1)(a) of the Wildlife Protection Act, 1972, in consequence of man-animal conflict in Ralegaon taluka of Yavatmal district. According to information available, as many as 13 villagers in Ralegaon, mostly graziers, have been found killed in forest.

The efforts to tranquilise the tigress has been continuing since Feb 2018. Due to undulated terrain, deep gorges, the forest officials have been preventing field staff from reaching the tigress. While there are a total of seven tigers in this forest area, others have not been sighted or camera trapped near human kills.

The Nawab, in one of his last operations, had gunned down a man-eater leopard in Varkheda in of Maharashtra in Dec 2017. #KhbarLive