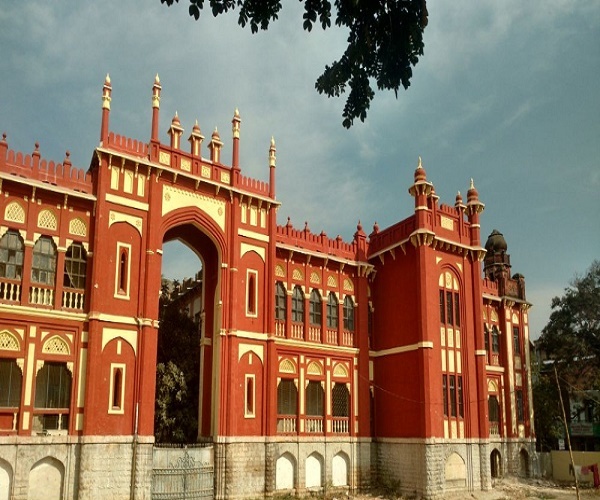 Many of Hyderabadis would have passed by ‘that reddish building near the High Court’ in the old city on the banks of the (now defunct) river Musi. For those of you who don’t know, that’s the Govt. City College, one of Hyderabad’s oldest educational institutions. And there’s finally some good news for us, especially heritage lovers.

After years, the historic City college is finally being restored to its past glory. The institution was constructed between 1915-20 during the reign of Mir Osman Ali Khan, the last Nizam of the erstwhile state of Hyderabad. The college building was designed by Vincent Esch, one of the world’s prominent architects then.

The City college was commissioned at a sum of Rs.8,36,919 back then. One of the first things that catches our eye about it is its bright red colour. The structure represents the Indo-sarcenic architecture and is apparently also known for blending the pillar and lintels style of the Ajanta and Ellora caves into the superstructure and façade to represent the Hyderabad’s composite culture (according to its website). And it doesn’t fail to impress. Anyone who visits it will not miss the three-storied structure’s large central archway and parapets with many onion domes. These are supported by brackets as well as corbels and lintels in the Hindu style of architecture.

The building has four imposing arched entrances and has been built around six courts. These small courtyard spaces provide both natural light and ventilation to the classrooms. Many might not know this, but the City college actually started as an Urdu School and later was turned into an institution of higher education.

Standing on the southern bank of the river Musi, one can see the Osmania hospital from the place. Please take a few minutes to see the place whenever any of you pass by it. It is definitely worth your time.

The college is also known for its illustrious alumni, which includes in its list a former chief minister, union minister and sportsperson (although it should be noted that decades ago when the city college was at its academic zenith, there weren’t many institutions around so the city’s best studied in the few options available, unlike now).

But that apart, it has a lot of other interesting stories to tell. According to MK Moinuddin, a former student (of the college) and Communist Party of India member who was part of the Telangana armed struggle, Makhdoom Mohiuddin, one of the city’s most well known Urdu writers and Marxist /Communist revolutionary, was fired from his job as a lecturer at the City college for his activism and stand against the Nizam.

Together with the Osmania University’s Arts college and the Nizam college buildings, the Govt. City College is a remnant of a different era in Hyderabad’s history when they were the premiere institutions of their time. #KhabarLive