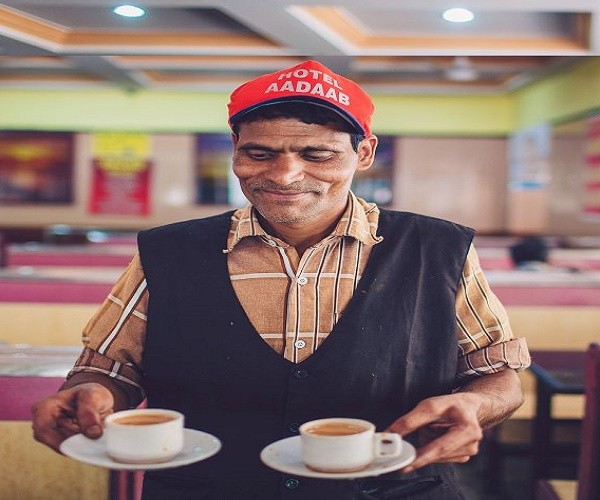 Chai of Hyderabad and Irani Chai….a clear drinking feast for anybody who visits Chai shops, hotels and irani tea stalls across the nawabi city. If you were a student, taxi driver, government clerk, political activist, poet or an unemployed youth in the Hyderabad of the 1960s and 1970s, chances are you would have spent long hours in an Irani cafe, seated on a bentwood chair with a round seat, with a cup of tea on the glass- or marble-topped table in front of you.

Immigrant Iranis brought the European cafe culture to Bombay first, and when they discovered that the city preferred tea to coffee, they, of course, offered it in a cafe. From Bombay, the Irani cafe made its way to Hyderabad and eventually, there was one on every street corner between the city’s Hussain Sagar Lake and Charminar – Cafe Khayyam, Cosmopolitan Cafe, Azizia Cafe, Garden Cafe the list went on. And with each cafe grew a culture rich with food and drink, its own vocabulary and a repository of stories.

‘Ek pauna, do biskoot,’ the server would shout as a customer slowly made his way out. The word pauna derives from pau, which means a quarter. A quarter of the tea cup is left empty so that two spoons of thick milk and two spoons of sugar can be added to dark, over-boiled tea. Dark brown, milky, sweet – the pauna came served in small tea cups. The manager, seated at the door which served as both entrance and exit, would of course know precisely which customer should be charged for it. There were no bills, no frills. The server’s memory was all. Try walking out without paying the bill, the server would only shout louder and more forcefully – ‘Ek pauna, do biskoot!’ Everyone paid.

That practice of billing you by shouting out your order generated its own humour. Those who sat long hours ordering nothing – as we did – had a self-deprecatory announcement that would declare our exit – ‘Khaaya nai, peeya nai, glass thoda. Chaaranai!’ (‘Ate nothing. Drank nothing. Broke a glass. Four annas!)

It was a measure of the Irani owner’s indulgence towards us students that we would very often step into a cafe merely to grab chairs and sit around a table discussing student politics, the writing of Marx and Kafka, the films of Ray and Wajda or which guy that girl was looking at. Endless cups of tea would be ordered, but often shared in a one-by-two pauna – half the tea remained in the cup, the other half was poured onto the saucer and slurped down. A metaphor of our times.

For my generation of Hyderabadi students, and indeed for that of Peter Hassan and his friends, Irani cafes were the place to hang out. There was not a day during my time in Nizam College that my friends and I would not find ourselves in one. Our tea was accompanied by the famous sweet and salty Osmania biscuits, which were named for the last Nizam of Hyderabad, Mir Osman Ali Khan. Baked with almost equal amounts of butter and sugar, it is that pinch of salt that gives the Osmania biscuit its edge.

A hungry taxi driver would of course want something more substantial such as bun-maska served with an omelette. My personal favourite at an Irani cafe was always the small, crispy onion samosa. Deep-fried, the thin pastry layer gives it crispness, and the combination of the onion and coriander filling is full of flavour. Some cafes offered another Hyderabadi variant of the samosa – the lukhmi. One could get a vegetable lukhmi filled with potato or a non-vegetarian version with kheema. The lukhmi’s outer layer is thicker than that of an onion samosa. For a Hyderabadi in New Delhi the only place to go for a lukhmi, if one is lucky, is the home of Doreen and Peter Hassan.

Doreen and Peter have come to represent the best of Hyderabadi cuisine in New Delhi. Most imagine that Hyderabad’s speciality is its dum biryani but thanks to Doreen, her guests know that our city’s exquisite cuisines also include such vegetarian dishes as Tamatar ka Kut and Mirchi ka Saalan. On a lucky evening, you get to taste Khubooli, yet another Hyderabadi speciality.

Until 1978, every Irani cafe displayed the handsome and regal portrait of the Shah of Iran, Mohammad Reza Pahlavi. When the Shah visited Hyderabad in the early 1970s, every Irani cafe owner lined up on the tarmac at Begumpet Airport to welcome him. They kneeled to greet him, and as he and his beautiful wife, Empress Farah, walked down the red carpet, the loyal Iranians kissed the ground on which their majesties had walked. After the revolution, however, the Shah’s portraits were taken down and replaced with even larger portraits of Ayatollah Khomeini. Even so, the Irani at the counter neither had an interest in politics back home or the politics we would be discussing at his tables. He was happy swatting flies, collecting money and keeping an eye on his staff.

Today, many associate Hyderabad’s cafes with biryani. In my student days, though, few cafes served food and fewer still served biryani. The Irani cafe was not a place you went to for a meal. Like European cafes, one went there for beverages and perhaps a snack. One such was a professor from Cambridge University, UK, who had been told that the best biryani in Hyderabad was to be found at an Irani cafe near Charminar, and so I took her there for lunch.

The manager at the counter was flabbergasted and remonstrated us – ‘No place for zenana!’ The lady was willing to sit in the general section and to find the middle path, the manager immediately summoned a screen and placed it around the table!

Doreen tells us how she and her friends would have runners called baharwalas to fetch snacks for them from a cafe because women would not be allowed in. At Cosmopolitan Cafe in Narayanaguda, however, things were different. An army of us student activists, boys and girls, would invade it and have long arguments in loud voices. The manager had to just put up with it.

In a fit of nostalgia, I decided to visit an Irani cafe on a recent visit to Hyderabad. I drove to every street corner I knew but in vain. In my familiar childhood neighbourhood of Himayatnagar, Cafe Khayyam was gone. Cosmopolitan was still there, but no longer called a cafe, and now serving only ‘North Indian & Chinese’. At the Bashir Bagh crossroad, down the road from Nizam College, the cafe of our student days was no longer to be found. I drove all the way through Abids and on to Charminar, via Sultan Bazar and Jambagh, returning home through Moazamjahi Market and Nampally. None of the familiar cafes were there. In Himayatnagar, no one I spoke to knew there was once a Morine Cafe. In what seems to be an Americanization of the culture of eating out, Irani cafes have been replaced by places that call themselves ‘fast food’, ‘restaurant’ or even ‘hotel’. Not cafe. And almost every place display boards letting you know that biryani and haleem are on offer. Secunderabad’s Garden Cafe now calls itself Garden Restaurant. Shah Ghouse Cafe and Nimrah Cafe & Bakery, near Charminar, were the odd ones out. Their names figure on exotic tourist websites. Neither is worth a visit, sadly.

ALSO READ:  Is This 'The End' Time Of Prof Kodandaram's 'Political Career'?

Not surprisingly, there is a Chicago Cafe near the U.S. consulate in Begumpet. It serves authentic Irani chai and Osmania biscuits. But it also offers a south Indian meal and snacks like aloo-poori. I stepped into many of these newer places, wherever I could find parking space for my car, but I did not go back in time as I had hoped to. The lazy ambience of the past was gone. It was ‘fast food’ alright. Everyone was in a hurry to order, eat, drink and go. There was no server shouting out the bill to the manager at the door. You got a piece of paper. There were no students sitting around tables and plotting revolutions. More than the change of a name, what saddened me was the change in culture. With the word ‘cafe’ gone, they no longer have the convivial atmosphere of one.

My nostalgia punctured, I decided to make one last halt at a famous haleem place near my house in Banjara Hills. The name – Sarvi TakeAway – was not very inspiring but I decided to stop for a chai and samosa. The former was nothing special but the latter managed to do what I had hoped for – it took me back four decades. #KhabarLive