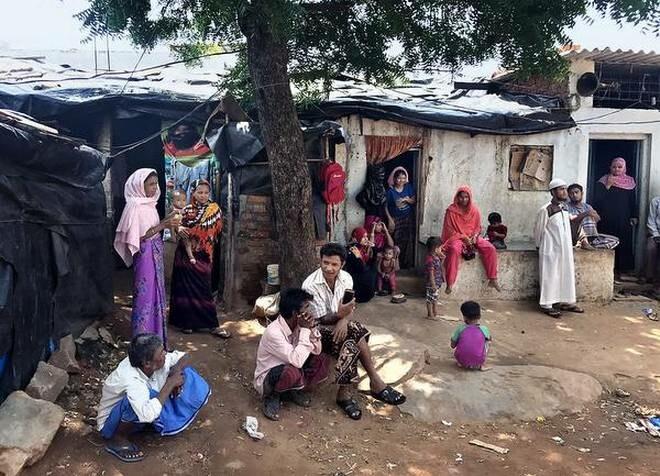 Described as the world’s most persecuted minority, India’s ‘Rohingya refugees’ are fearful of speaking out against India’s controversial new citizenship law which specifically excludes them.

Mohammed Zubair pointed at a blue tin gate guarding a plot of land on which construction was busily afoot. A year ago, in 2018, the vacant plot served as a field for a ‘football club’ run by young Rohingya in men in their 20s. Now, the plot, which is privately owned, is out of bounds. 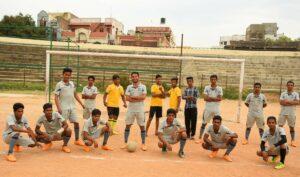 The memories of last year’s football season are still fresh, but Zubair and his friends from the 30 Rohingya Muslim camps in Balapur and other isolated suburbs have uncomplainingly accepted the loss of one of the few sources of joy in a country that has grudgingly given their community sanctuary, only for the ruling Bharatiya Janata Party to turn them into scapegoats for a communal and exclusionary law — the recently passed Citizenship Amendment Act of 2019.

The 18,000 Rohingya currently seeking sanctuary in India, represent a fit case for a generous immigration and citizenship policy for persecuted minorities fleeing unstable nations in the Indian subcontinent. The Citizenship Amendment Act of 2019 claims to offer just that — with a vital distinction. The act is only meant for refugees from Pakistan, Afghanistan and Bangladesh and is meant for persecuted Hindus, Jains, Sikhs, Christians and Parsis, but specifically excludes Muslims.

As a persecuted Muslim minority from Myanmar; the Rohingya are excluded from this act. “Rohingyas will never be accepted as citizens of India,” Home Minister Amit Shah told the Indian parliament on December 9 this year. Earlier this year, Shah described undocumented residents as “termites” who must be thrown into the Bay of Bengal.

This week, students and citizens across India protested that the new citizenship act violates India’s secular constitution. Here in Hyderabad, students from four universities including Maulana Azad National Urdu University, University of Hyderabad, NALSAR University of Law and Osmania University have taken to the streets to demand the Union government roll back the act. Social media is awash with clips of peaceful protests, violent policemen, and in one instance, a group of demonstrators reading the preamble to the Indian constitution at India gate.

But Zubair and Hyderabad’s Rohingya community are silent lest they provoke a violent backlash. The local police in Telangana, several Rohingya said, have already visited the camps to warn its 4000 residents not to stage protests or give any statements condemning the act, or demanding their community be included in its ambit.

“We are very thankful to India for letting us stay here. We cannot say anything about CAA. The police asked us not to protest,” said Zubair, who ran a small graphic design studio in Myanmar, before he was forced to flee.

Yet the living conditions in the Rohingya camps illustrate just how cruel and exclusionary India’s new citizenship act is. 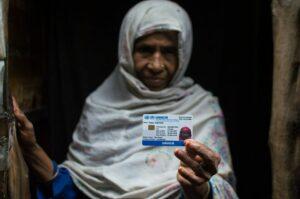 Najeeba Khatoon, a 67-year-old Rohingya woman has a UNHCR refugee identification card which was of no use when her daughter Jamatul Bakiat, who was 27, had to deliver a child. The card, issued by the United Nations after a strict interview, was rejected at the hospital nearby. Denied of medical help, Khatoon and a local midwife boiled water, sterilised clothes and delivered her daughter’s second baby girl.

Months after the delivery, Bakiat caught a bout of chickenpox and was denied medical aid by the city’s hospitals despite repeated requests made by the Non-Governmental Organisation assigned by UNHCR to care for the Rohingyas in Hyderabad. Bakiat died six months after her delivery. Bakiat’s infant daughter died of starvation a month later; her husband and her elder son moved to a settlement camp in Jammu to look for work.

Two deaths in two months in a refugee camp presented a poignant problem for Khatoon:

“We had no money to bury my daughter. It took a day to find a burial ground nearby. We had to pay Rs. 9,000 for burial. Her infant was not buried next to her mother because we were not given land in the same cemetery,” she said. Khatoon had to pay again for the six-feet land, all from her meager saving acquired over a lifetime. In the refugee camps where ration rice and dal are distributed each month, not many old people earn a living.

“Most of the men who work are scrap collectors. Those who have elderly people at home provide for them. Otherwise, the old have to care for themselves,” said Zubair.

A total of 30 people who died in the last two years had to be buried. This incurred additional expenses for cash strapped families who end up in debt traps, he added.

Had Khatoon heard of CAA? She had.

“We can’t ask for anything more than what is given to us,” she said.

A younger relative of the woman, however, said they need medical care for children. “Will the CAA provide for them too?” she asked.

Zubair explained that the NGO has not yet explained CAA’s exclusionary nature to the refugees in the camp. A legal advice committee will meet the refugees only the next day, he added.

“We have no claim. They will explain that we have no claim,” he said, adding the Rohingyas can in no way take a stand over India’s internal strife.

What they can ask for is better amenities and security on humanitarian grounds. Other than medical aid which comes once in three months and legal support for those arrested for being foreigners living in India without visa, NGOs too cannot help much, Zubair explained. In Hyderabad, ten cases booked by police on Rohingya men are currently active. 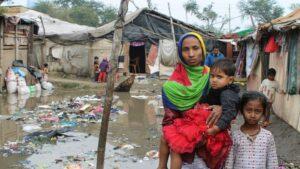 In a nearby madrassa, built into a nook surrounded by two room homes, girls were being counselled against marrying too early.

“Most girls marry when they are below 18-years-of-age and bear children. Risky pregnancies,” said Advocate M Sujatha who was at the camp for counseling.

It was five days after the Rajya Sabha had passed the Citizenship Amendment Act; the young women seemed to know about it.

“We are not covered under the law,” said a 16-year-old Aamina Begum. She along with her family had fled Myanmar in 2004. The family reached Bangladesh and then crossed over into India.

Begum remembered very little of her childhood, two years of which was spent in Calcutta.

“I didn’t know the language and we lived on a construction site. I never stepped outside,” she said. In 2007 her family moved to Hyderabad and she grew up in the city where her father, Noor Ahmed, started work as a scrap collector.

In Hyderabad, the girl who speaks Burmese at home learnt Hyderabadi Urdu and started going to the madrassa. If given an option of citizenship would she want to stay in Hyderabad?

“I want to go home,” she said, even though no memory of the home which she had left when she was a toddler ever occurred to her. She, however, wanted to study further even though as per the law she cannot appear for her Class X examination.

The refugee children enrolled in government and private schools are prevented from writing public examination as they do not have citizenship in India. In the past two years, two boys who had studied up to Class X in a Hyderabad school had to dropout as their names were not included in the rolls for Secondary School Certificate examination.

Located close to the cramped madrassa at a tea stall where men in the community rested after returning from work, the mood was grim.

“The government could have given us an option,” a lean, 25-year-old man who did not want to be identified said. He had fled a home set on fire by the military personnel in Myanmar.

“We can’t say that we are scared. Like Indian Muslims we cannot say that the CAA should be scrapped. We also cannot ask the government to include us in the list,” another 29-year-old said, while referring to CAA. The Act has brought an unease at the camps, residents confirmed. 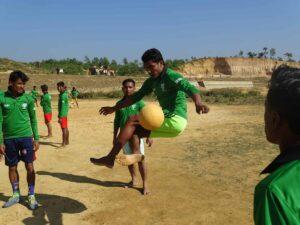 In an interview, Hyderabad’s MP Asaduddin Owaisi had pointed out that CAA excludes large number of persecuted minorities apart from rendering Indian Muslims “stateless”. A Constitutional law expert and NALSAR Vice Chancellor Faizan Mustafa had said that if the Union government “cared for the persecuted minorities”, all persecuted minorities of all neighbouring countries including the Rohingyas of Myanmar should have been included in the Act.

For now, all that the Rohingyas could ask for is long term visas which only a few of them possess.

“The process is very tedious and often the application is rejected,” Zubair said. The visa could give benefits including the right to work. If not the visas, ration rice and dal for all, burial grounds and medical support is what’s needed the most, community members said. Currently, just 120 families get ration in Hyderabad.

A legal advice meeting on CAA meant for the Rohingyas alone commenced at 1 pm on Tuesday. It witnessed attendance from all Rohingya families located in Hyderabad. The meeting confirmed what many of them knew: The Indian government claims India’s new citizenship act was meant to protect the persecuted, but the Rohingya —described by the United Nations as the most persecuted minority in the world — were excluded from its ambit. #KhabarLive

Why Rescue Of Adolescents Remains ‘Problematic’ Despite A Stringent ‘Child Labour...