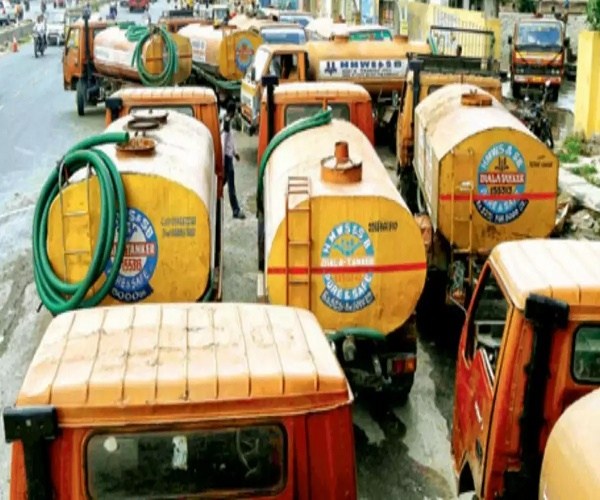 Without any meaningful supervision and control from the Greater Hyderabad Municipal Corporation (GHMC) or the state government, Hyderabad’s water tanker mafia has been running an unhindered annual business of estimated Rs 100 crore plus.

Unmetered supply by the GHMC to water tankers, daily theft of thousands of litres of filtered drinking water from the municipal filling stations and other public sources, cartelisation of water supply rates, harassment of housing societies which try to fight exploitation by water tanker operators, destruction of CCTV cameras at water-filling stations and refusal to allow GPS/GPRS (general packet radio service) systems to track the movement of water tankers are the ways in which the business has acquired the dimensions of a mafia operation.

Such is the firm grip of the water mafia over the city that water tankers have been found to divert supply to bottled water units. Processed municipal water is being used to package 20 litre jars of ‘mineral water’ and sold to commercial establishments and homes at Rs 50-60 each.

Added to this is the ever-expanding dependence on water tankers as newer housing colonies get occupancy certificates every year without municipal water supply. Since 2001, the civic administration has virtually abdicated its responsibility of providing water to housing societies in fringe areas by entering into ‘water affidavit’ agreements with builders. As per these affidavits, the responsibility of supplying water rests with builders who fulfill this by passing on the business to water tankers.

Drinking water mafia is at its full swing with brazen encroachment of tanks in and around the city, sinking bore wells and indulging in the business of selling water worth at least Rs 100 crore a month. The mafia allegedly has had the support of the Revenue and Energy department officials. They seem to have turned a blind eye to check water mafia activities.

Environmentalists are crying hoarse that indiscriminate sinking of bore wells and drawing water is pushing the water table further down. Business runs in to crores of rupees a month Borewells sunk indiscriminately Many tanks encroached across Hyderabad Many tanks in and around the city, including Sunnam Cheruvu and Tummidi Cheruvu in Madapur, Prakashnagar tank in Hafizpet, Malkam tank in Rayadurgam, Gangaram tank in Chandanagar, became the target for the mafia.

In Serilingampally area, 38 out of 42 tanks are under the mafia encroachment. The illegal business activity is also being reported from the tanks at Uppal, Kukatpally, Miyapur, Ameenpur and Balapur.

The mafia leases houses in full tank level areas and obtains permission to sink bore wells and for electricity connection to run their business. One question that eludes answer is how could the officials give permission to sink bore wells in FTL areas and fix unauthorised electricity meters? At some places, the mafia is resorting to pilferage of electricity. Advertise With Us In Sunnam Cheruvu area, the government had issued power connections for agriculture purpose, which are being misused by the mafia since agriculture is practically nil under the tank ayacut.

What causes to raise many an eyebrow is the issue of new power connections in the FTL region. Some years ago, the Collector ordered the officials to stop issuing permissions to new electric meters and bore wells. In spite of it, there was no let up in the situation. At some places, pipelines are run through the tank beds to fill water tankers. The water is sold to IT offices, educational institutions and also for the construction of houses.

The monthly business turnover runs into several crores of rupees. Heavy vehicles are not allowed into the city before 10 pm. But, water tankers ply freely on roads during daytime allegedly in cohorts with the traffic police. Several have built their homes on the periphery of Yellammabanda tank on Kukatpally-Chintal road. The house owners obtained permission to sink bore wells for domestic purpose.

But some brokers took land on the tank periphery on lease from house owners and sunk bore wells indiscriminately. Huge water tanks were built on house tops to store water. They procured equipment to fill five water tankers simultaneously. The State government has only 1,000 tankers as against 5,000 by the private players. The government sells each 5,000-liter capacity tanker at a price of Rs 450 each, as against Rs 1000-Rs 1200 for each tanker by the private players.

The private players operate at least five trips of each tanker. According to a conservative estimate, the private players transact water business worth Rs 100 crore a month. During the peak season of summer the cost of each tanker is multiplied manifold keeping in tune with the demand. If anyone crosses their path, the mafia will not hesitate to launch an attack against them.

According to Kasireddy Bhaskar Reddy, a BJP leader, the government’s promise to restore past glory of tanks is limited to mere statements. In Serilingampally, water level in various tanks has depleted and the ground water table receded further. However, the government officials are denying giving permissions to bore wells in violation of rules. They claim to have not received any complaints against the water mafia. According to Serilingampally MRO Tirupati Rao, a survey on full tank level in Serilingampally is going on. #KhabarLive

How The ‘New Chief Minister’ Of Andhra Pradesh Should Keep Promises...