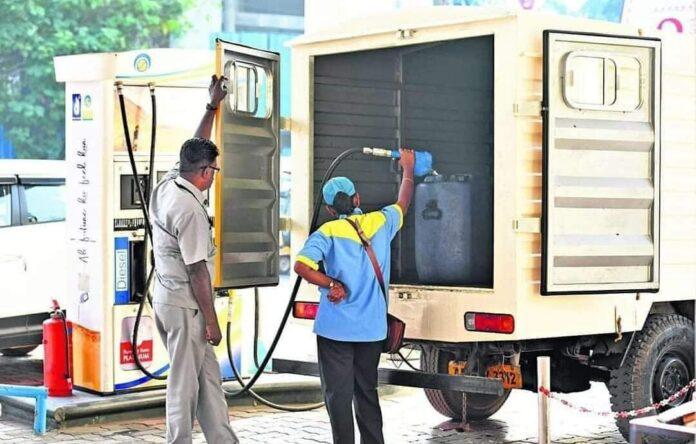 It is very easy to buy loose petrol in a plastic bottle in Hyderabad. Quite easy, as #KhabarLive found and visited seven petrol pumps in the Hyderabad, three of which sold petrol to our team member in a bottle without asking any questions.

Vendors are illegally selling fuel at roadside outlets, violating the rules and posing danger to passersby. Several outlets are filling petrol and diesel in 1-litre and half-litre pet bottles and motorists are buying them at a premium as fuel stations are located far away.

Of the seven pumps that #KhabarLive visited, those located in Lakdi-ka-pul, Khairatabad and Banjara Hills area sold loose petrol without charging anything extra amount.

Four petrol pumps – two in Somajiguda and one each in Khairatabad and Lakdi-ka-pul, refused to sell loose petrol to #KhabarLive. “We have been told (by the pump owner) not to sell petrol loose after the rape and murder of the doctor,” said a pump in-charge at Somajiguda. “Anyway, petrol pumps are not supposed to sell petrol loose. We were a little lenient when customers pleaded with us, but not anymore.”

“Petrol pumps must adhere to the Petroleum and Explosives Safety Organisation (PESO) Rules which bar the selling loose petrol or diesel in plastic bottles,” said Ashok Naredi, a member of the Telangana Petroleum Dealers’ Association. “After the tahsildar was set ablaze in her office, we had asked pumps not to sell loose petrol or diesel, but there are pumps which still sell the fuel. We discourage such practices.”

The association members say the government should issue a notice or letter to all pumps. “In most cases, customers create a ruckus if pumps refuse them petrol in plastic bottles. It is tough to argue with them. In some cases, customers genuinely need petrol for their vehicles. The police or department concerned should send a letter against the sale,” said another member of the association.

Recently, Telangana Petroleum Products (Licensing and Regulations of Supplies) Order, 1980, bans selling or transporting of loose petroleum products without invoice. It also prohibits petrol pumps from selling petrol in plastic bottles, unless it is an oil company employee or dealer, who can provide an invoice.

The practice, though for long, has suddenly caught the attention of the authorities, following reports of rampant fuel pilferage.

The fuel is stored in small bottles and sold in Banjara Hills, Jubilee Hills, Secunderabad, Tolichowki, Serilingampally, Alwal, Rajendranagar, Hayathnagar and Malakpet, to name a few.

As per the rules, sale of loose fuel is prohibited. “There is no guarantee that the fuel sold is genuine or adulterated.

“The departments concerned should initiate action. A thorough probe will bring out the source of the fuel,” said Amaram.

An inspector with the commissioner’s task force said they conduct raids on the direction of the civil supplies department.

“Actually, the civil supplies department monitors fuel. Whenever they approach us for assistance, we conduct joint operations. Otherwise, we independently raid such outlets when large scale fuel is stored illegally,” he said. #KhabarLive

Hyderabad Police’s ‘SHE Wing’ ‘Making A Difference’ In Many Lives