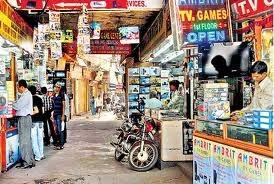 Many mobile repairing shops and mobile spare parts shops are on the edge of closure due to Coronavirus effect, as stocks of electronic spare parts deplete, delay in shipments from China is pushing up costs of these items in Hyderabad.

If you drop your phone and need to get the screen replaced, you may find it a little difficult to get the required spare parts in Hyderabad. With imports from China dwindling as a measure to control the spread of coronavirus, mobile repair shops, spare part traders and manufacturers are facing a shortage of key spare part components for repair of electronic gadgets, especially mobile phones. Those involved in the trade are unsure when new orders for spare parts will arrive.

There are an estimated 1,500 mobile repair shops packed into the narrow lanes of Jagdish market. Technicians sit idle on a Monday noon behind small counters with blowers and laminators adjoining every shop selling mobiles, covers and accessories. “It’s not just because of Holi, these streets are known to be crowded and people are avoiding coming here because of coronavirus,” says the storekeeper at the MI exclusive store at Jagdish market. “We don’t have stock for Redmi 8, Redmi note 8, realme 5i, these phones are made in China, we don’t know when stock will arrive,” he adds.

Jagdish market is one of the go-to places in Hyderabad if one wishes to get a phone repaired at a competitive rate and also to hunt for accessories. “If a phone needs repair, we check which model it is and buy the required part from a mobile spare parts shop. But since February, end spare parts are not available for certain phone models,” says Mohammad Imaan, who runs a stall selling second-hand phones and undertakes mobile repair work. Samsung, realme, Oneplus, Redmi, Oppo and Apple are a few devices facing spare parts shortage. We check with multiple shops for the spare parts and make the customer wait. We now have to turn them away as there are no parts,” he adds.

All through February, there was a shortage, says Amir Amjed, owner of Arshad Mobiles, “Now, certain parts are not there in the market but since March, we haven’t placed any new orders. The distributors in Mumbai and Delhi can’t assure, no consignments from China are arriving either by land or sea,” he adds. Retail shops such as Amirs face a shortage of covers for new phone models and accessories such as headsets.

Naresh Patel, working with Real Gold, a major supplier of spare parts for Jagdish market, says, “We are running out of display combos, touchpads, batteries for Android phones such as MI, Oppo, Samsung. We are also running out of laminator machines, tools such as the opener, hot guns, electronic cleaner spray,” says Naresh. “Our last batch of stock arrived on February 20, We usually receive goods weekly but haven’t placed any new order. It’s all because of this coronavirus issue,” he adds.

The shortage has also pushed up the cost of whatever spare parts are available in the market. “A display screen cost has shot up from Rs 600 to Rs 850, and if only one shop has the stock, the price could even touch Rs 1,700 for the display screen,” says Amir, who adds that customers have no choice but to pay for the overpriced mobile spare part. The price of mobile covers, speakers mics and even LED light bulbs has also shot up by Rs 100-200.

At Ambrit TV games and repair shop for PlayStation, Xbox games and consoles at Koti, stocks for peak season in April and May were ordered in December. “We placed orders in advance for accessories and games, but we are worried about spare parts for repair work,” says Ambrit Devendar, the owner, adding that no one expected this coronavirus to have such an impact.

ALSO READ:  Did UP CM Yogi Adityanath Overestimate His Strength On Home Turf?

Electronic goods stores for air conditioning, washing machines, television sets at Secunderabad and Koti say they are well stocked and the present supply crunch won’t impact them in the short term.

For electronic firms in the telecom sector that have production facilities in China and assemble parts in India, delays in shipment mean delayed product launches and losing market share. “Whichever manufacturer we call in China, they say the goods cannot be transported. The entire logistics sector has come to a halt,” says a business development manager in the telecom sector. “They ask us to check with them in April first or second week, and that too just to see what the situation is like then.

There are no shipment of spare parts or processed goods coming from China and no electronic equipment assembly is happening in India. The delay till April itself will have an impact on the Indian and global markets for the next one and half years. Because even as the Chinese manufacturers clear their inventory, they will be flooded with orders not just from India but all over the world,” the executive adds. #KhabarLive