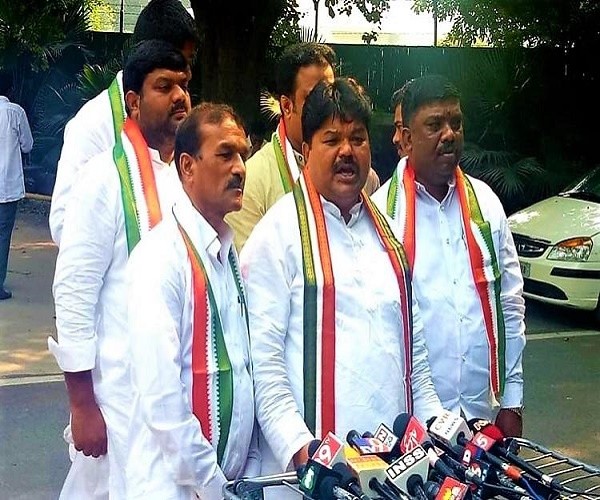 In a big blow to the ruling Telangana Rashtra Samithi (TRS) in the state, several senior political leaders defected to the Congress on Saturday in New Delhi in the presence of party President Rahul Gandhi. The leaders include former Gajwel MLA Narsa Reddy and Member of Legislative Council from Narayankhed, Ramulu Naik.

Both leaders lashed out at Telangana caretaker Chief Minister K Chandrasekhar Rao and said that the time had come for the TRS to be voted out of power.

Speaking to #KhabarLive after joining the Congress, Ramulu Naik said, “The people of Telangana are ready to make Pragathi Bhavan (The CM Camp Office) a ‘Praja’ Bhavan and are coming forward. I spoke to Rahul Gandhi and only asked him to mainly look into the issue of reservation for the ST community in the state.”

Speaking to #KhabarLive before he joined the Congress, Narsa Reddy said, “I have served people all my life and have held various posts over the years. In 2014, after I lost to KCR, I joined the TRS with the hopes that the people of Gajwel will benefit and prosper. However, I feel that KCR is being distant from the people and not paying attention to their issues. Therefore, I resigned from my post and have decided to join the Congress again,” Narsa Reddy told a local media outlet.

Asked about the suspension, Reddy said, “I welcome the decision of the party to suspend me. Earlier, I could easily approach the former CMs with the problems of my people as their doors were always open. But now, I can’t even cross the gate of KCR’s farmhouse, even though I’m an ex-MLA of the same constituency. What will be the state of the common man then?”

Senior Nizamabad leader and former Rajya Sabha member D Srinivas also met with Rahul Gandhi but dodged questions from reporters and refused to confirm or deny that he was planning to join the Congress party.

Srinivas, a former minister, had also headed the party’s state unit at one point in time but had defected to the TRS in 2015.

ALSO READ:  'Am 60 With Youthful Passion And Beauty, Need A Passionate Young Man To Marry'

While Ramulu was sacked by the TRS for his alleged ‘anti-party’ activities earlier this month, Narsa Reddy received a similar notice from the party on Friday. Narsa Reddy was the former MLA of Gajwel, the constituency where Telangana Chief Minister K Chandrasekhar Rao contested and won in 2014, while Ramulu was one of the founding members of the TRS.

After the elections, Narsa Reddy joined the TRS and was made the chairman of the Telangana State Road Development Corporation. Speculation about him joining the Congress was fueled when he met with Vijayshanti, who has been campaigning for the Congress. He left for New Delhi on Friday after resigning from the post of chairman at the RDC, but not before the TRS suspended him from the party.

The move is expected to boost the Congress in the state, which is presently forging a ‘Mahakutami’ or grand alliance with the Telugu Desam Party (TDP), Telangana Jana Samithi (TJS) and the Communist Party of India (CPI).

The Telangana Assembly was dissolved on September 6 and KCR had expressed his wishes to go for an early election. Following this, the Election Commission has said that the voting will take place on December 7 while the results will be announced on December 11. #KhabarLive

The Importance And Significance Of ‘December’ In Telangana