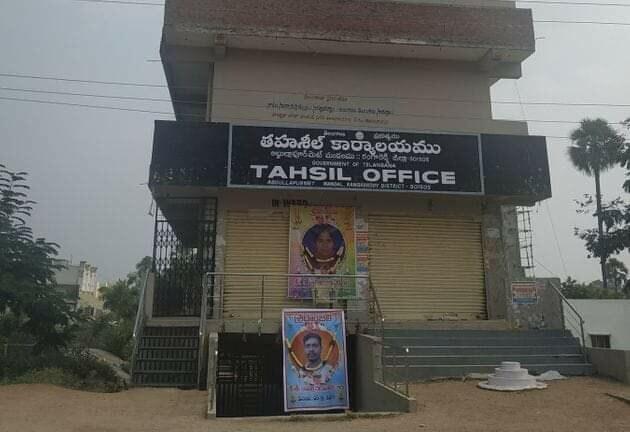 Why Telangana farmers caught between a real estate boom and the government’s ‘purification’ drive to settle land disputes?

When tenant farmer Kura Suresh doused Abdullapurmet tehsildar Vijaya Reddy with petrol and set her ablaze in her office in Telangana’s Ranga Reddy district on November 4, he was reportedly driven by anger over her refusal to grant him a pattadar (land owner) passbook. The 34-year-old farmer needed the passbook to ascertain ownership over seven acres of land that he claimed his family had been cultivating since 1956. When he came to confront Reddy, he had with him a copy of a land deed registered in 1996.

Reddy, who was 37, died on the spot. Her driver, who tried to save her, died the next day. Two days later, Suresh, who had sustained 60% burns, also succumbed to his injuries. On Monday, Reddy’s attender K. Chandraiah, who was in a critical state for almost a month, also died, taking the death toll in the incident to four.

The murder was condemned by political leaders and sent shockwaves among Telangana’s revenue officials, who struck work for several days in protest. Revenue office workers in Karimnagar district narrowly averted a repeat of the incident on November 19 when they overpowered a farmer, identified as Kanakaiah, who sprinkled petrol on them and tried to set them on fire. Like Suresh, Kanakaiah reportedly wanted the office to grant him a pattadar passbook. With three other instances of disgruntled farmers laying siege to revenue offices reported in the interim, the government heightened security in some revenue offices.

On closer inspection, Reddy’s murder is not just a grisly incident evoking fear and condemnation. It serves as a window to the disquiet among Telangana’s farmers in the backdrop of the government’s two-year-old “purification” drive to settle land disputes and a coincidental real estate boom in Ranga Reddy district.

The pattadars of Telangana
On November 8, the day after Suresh was cremated, his wife Latha Suresh told HuffPost India the family had no clue he was planning to take such a drastic step. All that she knew, she said, was that “he did not have a job and cultivated the land his father has been cultivating for a while”.

The Kura family claims to have farmed this seven-acre plot in Bacharam village in Ranga Reddy, located 25 km from Hyderabad, for four generations, growing mostly paddy and corn but also some green vegetables. The family lives in a two-room house built on vacant government land in nearby Gowrelli village.

“In 1956, my grandfather Durgaiah started cultivating the land after forging a deal [with] Raja Anatharao of Maharashtra,” said Kura Krishnaiah, Suresh’s father. “My father Venkaiah tilled the same land till he died. My brother Durgaiah and I have been cultivating it ever since. There were no documents to support the initial land deal even though we secured a land deed in 1996.”

For farmers like the Kuras, their lack of documents stems from what revenue officials say is a poorly maintained system of land records that has plagued Telangana since the 1980s, when it was part of undivided Andhra Pradesh.

Till then, the region followed the feudal Patel-Patwari system dating back to the rule of the Nizam of Hyderabad in the 1700s. Under this system, a village elder – usually a landed, upper-caste person – took stock of land transactions each year and updated land documents called pahani.

After coming to power in 1983, NT Rama Rao’s Telugu Desam Party government abolished the Patel-Patwari system over allegations of corruption. In the new system, the village revenue officer replaced the village elder. But this system had its own problems, one of which was that stocktaking was largely discontinued. Between the mid-1980s and early 2000s, many land transactions either went unregistered or were wrongly noted, two representatives of the Telangana Revenue Employees Services Association said on condition of anonymity.

In 2004, the Congress government of the time attempted to rectify these land records. But it was only in 2014 – after Telangana state was carved out of Andhra Pradesh and the Telangana Rashtra Samithi came to power – that an exercise to “purify” land documents took off.

As part of this exercise, the government launched the Land Records Updation Programme in 2017 to survey and settle land disputes once and for all. Under this programme, the old pahani document with 38 columns – specifying the relationship of the land holder to the land, and differentiating between land owner or pattadar and land enjoyer or cultivator – was replaced with a new document that almost only determined ownership. The pattadar passbook issued on the basis of the pahani also only ascertained land ownership.

This may have had something to do with Chief Minister K Chandrashekar Rao’s farmer welfare scheme Rythu Bandhu, which was announced in 2018 as a solution to farmer indebtedness. The scheme promises farmers an annual grant of Rs 8,000 per acre for the purchase of inputs such as seeds and fertilisers. But only land-owning farmers are eligible for this government grant.

Disputed land
For the Kuras, their lack of proper documentation has meant fending off claims on the land from other parties.

A tenant family, originally from Hyderabad, has claimed to have cultivated the same piece of land since 1956 and produced passbooks listing them as tenants.

Meanwhile, revenue authorities say the land belongs to the government as it was a gift or inam from the nizam to the original owner, Anatharao. In 1973, the Inams Abolition Act rendered all such land gifted by the nizam as state-owned and those who occupied them as encroachers.

However, Krishnaiah said his family was not aware of any change in their status. He also said the village revenue officer “has not raised any objection to us reaping the paddy”. He added, “They too know we are not completely in the wrong.”

According to Latha, Suresh was in a hurry to get ownership of the land because he wanted to sell it. “Recently, he wanted to become a real estate agent,” the mother of two said. “He hoped to start this line of work by first selling our land.”

Suresh wanted to cash in on the real estate boom in Ranga Reddy, his family added.

Following the tehsildar’s murder, TRS MLA Manchireddy Kishan Reddy and Congress leader Mal Reddy Venkat Reddy called separate press conferences where they accused each other of attempting to buy the disputed land from the Kuras. Both denied having done so.

Suresh’s family, too, denied any ties with the politicians. However, Krishnaiah admitted “some real estate agents approached us but we had not given [our] consent to anyone”. He added, “Suresh was interested in a deal but I was happy just cultivating the land.”

Real estate boom
Driving along the 158-km Outer Ring Road encircling Hyderabad, one sees numerous makeshift offices of real estate dealers, all of which have mushroomed in the last two-odd years. Close to the plot farmed by Suresh’s family – now ripe with golden paddy – a realtor has set up shop.

A revenue officer in Ranga Reddy, who did not want to be identified, said land prices in the vicinity “increased manifold” with the completion of the arterial road in 2016 – though parts of the stretch have been open to traffic since 2008. The land cultivated by the Kuras was no exception. “Currently, the disputed land is worth Rs 15 crore to Rs 35 crore per acre,” the officer said.

According to V. Karuna, director, Chief Commissioner of Land Administration, land prices around Hyderabad have been rising steadily for six years now, and the “real estate boom in the surrounding districts of Hyderabad is not directly linked to the land purification exercise”. She explained, “For farmers, their land has increased in value because as per Rythu Bandhu, they get steady income from their land even if the crop fails. So they want to hold on to the lands they have been cultivating.”

This may be true for some farmers. But the revenue official pointed out that a lot of farmland has gone on sale since the government started settling land disputes. “Once ownership is determined, it is easy to convert land [use] from agricultural to residential, depending on the owners’ willingness,” the officer explained. And residential land attracts handsome rates.

In the semi-urban settlements surrounding Hyderabad, most of which fall in Ranga Reddy, residential land is priced anywhere between Rs 5 crore and Rs 75 crore an acre, revenue officers estimate.

The ones left behind
While the real estate boom brought joy and riches to many, those in possession of disputed land – like Suresh’s family – were left out.

“Since 2017, we have been issuing new passbooks based on online pahani documents,” said the association’s president P. Venu Gopal. “It took a long time to digitise the pahani documents as there were several disputes regarding extent of land, family feuds and claims over inam/government land under Part B of the new land management system.”

Additionally, in the run-up to Assembly elections in December 2018, the ruling TRS promised farmers 60 lakh new pattadar passbooks. Of these, 10 lakh passbooks pertaining to disputed land are yet to be issued, the association said.