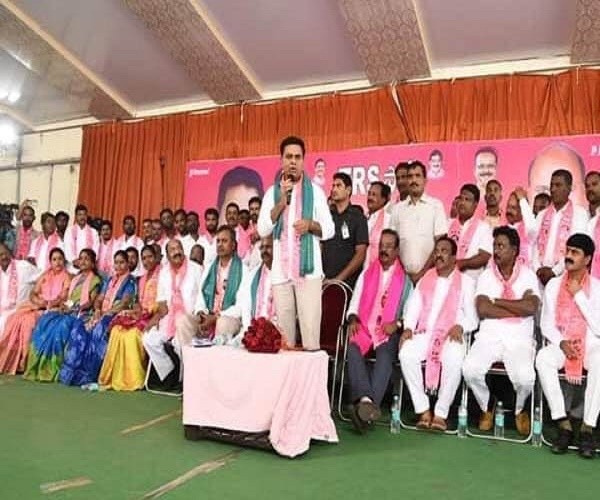 Grand Alliance has finally sorted out their problems by reaching an understanding on seat sharing. As per this, Congress may contest 90 out of 119 seats, leaving the remaining 29 to partners – 15 for TDP, 10 for TJS and 4 four CPI. An announcement will be made soon jointly on a common dais.

This show of unity is not bothering TRS much. TRS leaders are stilling continuing to focus all their energies on criticising TDP chief Chandrababu Naidu rather than on Congress which is the main competitor for CM position. There are no initial clues for this strategy of KCR though Naidu is not and cannot be in the race for CM post in Telangana. Now, some hints are coming forth from KTR who is mocking at Congress with his favourite statements.

KTR says that the Congress is not yet able to announce its CM candidate for 2019 elections which means there are still many internal conflicts in that party. This is the weakness that KTR wants to attack these days. He tells voters that there are over 40 chief ministerial aspirants in Congress. If Congress is voted to power, Telangana will have to be a mute witness to the changing of CMs every month, KTR says mockingly.

Congress has never been in such a pitiable situation in United AP or at least till YS Rajasekhara Reddy became CM. During YSR regime, only a select group of leaders dear to him enjoyed all the power while all his peers and competitors disappeared from the scene. Leaders like JC Diwakar Reddy had to remain satisfied with smaller positions. After sudden demise of YSR in 2009 helicopter crash, there was such a leadership vacuum that Congress found it difficult to pick up a right candidate.

There was Jaganmohan Reddy who mounted enormous pressure to make him CM as a continuation of YSR legacy. Eventually, K. Rosaiah was made CM though he was a non-Reddy. He was not expectedly allowed to complete his term as Reddy lobby worked relentlessly against him till N. Kiran Kumar Reddy became CM and his term became notorious for presiding over separate Telangana formation.

After division, Congress became almost a zero with no need for a discussion of CM aspirant in AP. It still has some life in Telangana because it has conferred separate statehood. Even then, there is not a single strong CM candidate who can promise to restore Congress in Telangana. This has given rise to a situation where every regionally strong leader in the districts started aspiring for Congress CM berth.

This inherent Congress weakness is going to prove costly since the opponent is KCR who is strategically attacking rivals leaving no scope to recover. KCR and family will not stop attacks on Babu now. They may reverse their strategy and begin criticising Congress more only when Congress is able to project an immediate CM candidate. This is indeed a big challenge. #KhabarLive

#BigQuestion: Does the BJP ‘Have A Chance’ In Andhra Pradesh?