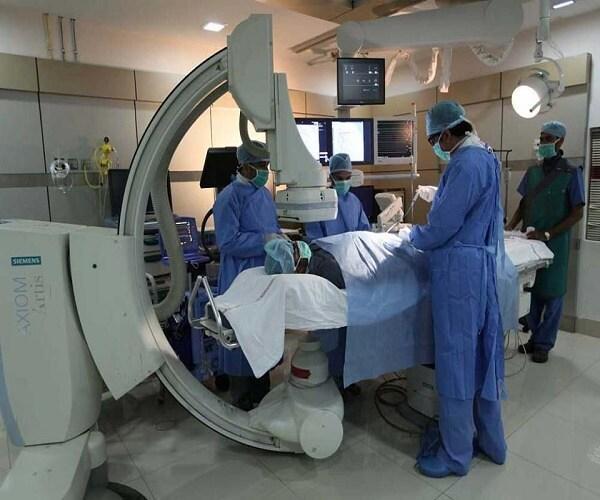 STEMI (ST-Elevation Myocardial Infarction)-Telangana is an extraordinary medical and health intervention designed, developed and almost ready for implementation in the State. Myocardial Infarction is commonly known as heart attack. The programme is aimed at diagnosing heart attacks promptly, at the periphery hospital designated as ‘Spoke’ and confirming the diagnosis using a tele-ECG (Electrocardiogram) machine provided there.

STEMI-Telangana intends to make the ECG facility available to all the people of the State, including 108 ambulances and primary health centres (PHCs). It would also ensure immediate validation of the diagnosis and proper management of such patients. Government healthcare facilities would ultimately build the capacity to diagnose cases of heart attacks and do thrombolysis treatment. In this, the clot-busting drug will be delivered through a peripheral intravenous line, usually through a visible vein in patient’s arm. This is performed at the patient’s bedside in an ICU monitoring heart and lung functions.

Advanced Care
The programme also aims at making available the angioplasty facility to all the people by establishing cath labs (an examination room with diagnostic imaging equipment used to visualise the arteries and the chambers of the heart and treat any abnormality found) and cardiology services round the clock in all the nine Teaching Hospitals in the State covering 90 spokes. There will be accessibility to international standards of care to the poor suffering with a heart attack.

According to experts and senior cardiologists, STEMI is the most serious type of heart attack, which is the most common cause of mortality in Telangana accounting for almost 17% deaths. This leads to high morbidity and mortality unless diagnosed and treated promptly in the ‘Golden Hour of Heart Attack’. Once the diagnosis is made, the patient is stabilised and treated with a drug called Thrombolytic Agent before shifting her/him to the nearest hospital designated as Hub. This could be a tertiary care hospital with high-end cath lab facilities, thus saving the patient’s life by acting promptly and appropriately in the golden hour.

Tackling Challenge
Dealing with STEMI cases is a real challenge due to the requirement of early diagnosis as well as providing the facilities and equipment needed for thrombolysis. Thrombolytic Therapy, followed by Percutaneous Coronary Intervention (PCI) or angioplasty, is commonly used procedures which decrease the mortality significantly. Due to non-availability of facilities, especially in rural areas, the Hub and Spoke model is quite useful. Hubs and Spokes are to be equipped with the STEMI Kit for timely transmission of ECGs for early diagnosis and thrombolytic agent as well as equipment for timely thrombolysis of the patient.

Although the National Health Mission (NHM) caters to the medical needs of rural areas, the majority of healthcare facilities include primary or community health centres with only basic amenities. Hence, poor patients from rural areas appear to be at greater risk. It is advisable that patients in rural areas with limited access to medical care and too long a time to reach a hospital with all facilities should undergo the pharmaco-invasive (PI) strategy of thrombolysis with a goal of First Medical Contact (FMC) to drug of 30 minutes or less. Initial thrombolysis should be followed, if possible, by referral to angioplasty-capable hospital for cardiac catheterisation within 3–24 hours of thrombolysis. The proposed Hub and Spoke model of STEMI management will bring in a significant change in the present way of management of heart attacks.

Dire Need
Telangana has 33 districts with an estimated population of 40.13 million. Hyderabad is the only metro city in the State with an estimated population of 12.24 million. Approximately 2.8 million cases of Ischemic heart disease are in Telangana and the approximate incidence of STEMI is 240 cases per one lakh population per year. Greater Hyderabad is well-developed with a number of corporate hospitals providing quality tertiary care facilities.

There are approximately 150 cath labs in the private sector in twin cities. But there are only two Teaching hospitals in the public sector in Telangana having the cath lab facility namely, Osmania and Gandhi Hospitals. They offer free of cost service and are the only destinations for poor patients for the entire State. Though NIMS also has a cath lab, it is a paid service.

The population of Hyderabad has almost doubled in the last 50 years but the number of cath labs remains the same. Both the labs are over ten years old and face a lot of technical difficulties and frequent breakdowns. Three-fourths of the Telangana population live in rural areas and do not have access to cath labs as well as primary angioplasty facility.

There are less than ten cath labs in the rest of the State and these are in the private sector. So, there is no option to give thrombolysis drug at the periphery in patients presenting within the golden hour, thus stabilising them before shifting them to a tertiary care centre for an angiogram and further management.

At present, it is not happening in district hospitals, area hospitals and CHCs even though there are many qualified doctors and diagnosis is made early. Almost all the STEMI cases are simply referred to the higher centres or private hospitals sometimes even without providing primary treatment leading to significant delays, morbidity as well as increased mortality.

Right Path
As Telangana is a newly-formed State and 23 new districts were formed during the reorganisation, most of the area hospitals or CHCs are designated as district hospitals. However, the infrastructure is still in the phase of development and is far from the quality care ICU facilities. Thus, the Hub and Spoke model of STEMI management is the most appropriate in the management of heart attacks.

The proposed plan of action seems to be that in the first phase of this programme, Osmania and Gandhi Hospitals will be made as two Hubs. Thirteen district hospitals (DHs) and CHCs will be attached to Osmania Hub and 10 DHs, CHCs to Gandhi Hospital as spokes covering 11 districts. Mahatma Gandhi Memorial Hospital, Warangal, is the next proposed hub and will be attached to 10 more spokes covering 8 districts once the cath lab is established.

The Hubs would have infrastructural facilities and disposables to handle the cases in cath labs, which would work round the clock to receive and treat patients referred from the spokes. The spokes will be equipped with tele-ECG machines and other necessary equipment, drugs, including a thrombolytic agent and other emergency drugs. When this Hub and Spoke model is fully functionary, the treatment of heart attacks will be made simple and easy. #KhabarLive

Why The KCR’s Innovative Voter Reachout Plan Not Comes Under Violation...

Is Telangana CM KCR The ‘New Mascot’ For ‘Politics Of Appeasement’?