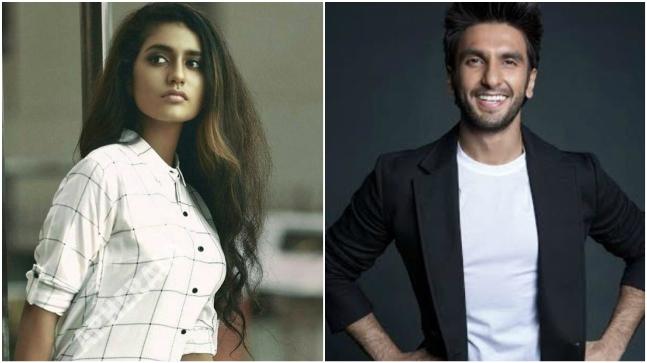 Priya Prakash Varrier is rumoured to play the leading lady in Simmba.
Directed by Rohit Shetty, Simmba will have Ranveer Singh in the lead.
Simmba, an out-and-out action film, will release on December 21.

Rohit Shetty has the Midas touch; it is almost guaranteed that his films will strike gold at the box office. Add Ranveer Singh to the mix. The actor is in top form at the moment, with his Alauddin Khilji act in Sanjay Leela Bhansali’s Padmaavat winning the hearts of the critics and masses alike. The formidable combination is set to come together in Simmba, which is touted to be an out-and-out action film.

Most actresses would give anything to be part of such a film, but if a report is to be believed, newbie Priya Prakash Varrier has beat them to it. Priya became a household name earlier this year, after her charming smile and wink in a song from her debut Malayalam film took the internet by storm.

The 18-year-old shot to viral fame in hours, and had filmmakers queueing up outside her door. Apparently, Karan Johar, who is co-producing Simmba, is keen to have her on board for the film. Incidentally, Priya is a fan of Ranveer Singh, and has expressed interest in working with him in several interviews.

A source is quoted as saying, “The girl’s role is not so big in the film. But Priya has become an overnight craze with the wink of an eye. Bollywood is interested in her. And who better equipped to consolidate Priya’s supremacy in the virtual world in the arena of cinema than Karan Johar?”

Simmba, which will have Ranveer Singh playing a cop, is slated to hit the screens on December 21 this year. #KhabarLive