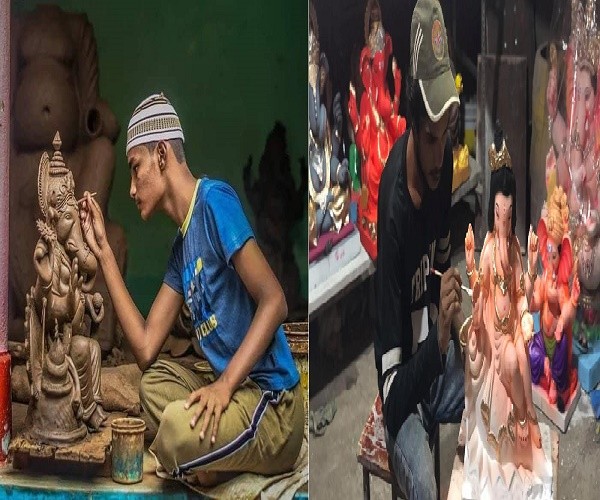 Through most of the year, 46-year-old Vinod Vijay is an art director in Tollywood based in Hyderabad. But for a few months leading up to September, he turns to idol-making.

Because that’s when he prepares for one of India’s most popular festivals, Ganesh Chaturthi, in the run up to which hundreds of artisans like Vijay make and sell thousands of small and big idols of the Hindu god Ganesh.

“The Ganpati festival is the best time for my business,” Vijay, whose workshop is located in the Dhoolpet in notorious old city area in Hyderabad, told #KhabarLive.

However, Vijay’s business model isn’t as profitable as many others’ because there still aren’t many takers for clay. Other sculptors usually go for the cheaper, but ecologically harmful, plaster of Paris (PoP).

So only the likes of Vijay, who have another job, can afford to put the environment first. In all other idol-making workshops near Vijay’s, PoP still remains the frontrunner, accounting for 80% of sales.

This clay-versus-PoP debate has in recent years become a key aspect of the discourse on the environment in connection with the annual festival.

Ganesh Chaturthi is the birthday of elephant god Ganesh or Ganpati, venerated for his wisdom and ability to remove hurdles. It is marked by hundreds of thousands of idols being installed, worshipped, and then, rather ceremoniously, disposed into the nearest available water body.

By some estimates, over 200,000 such idols—an overwhelming majority made of PoP—are immersed each year at the end of the festival in just Hyderabad, India’s fastest griwing IT capital, where the festival is the most popular.

Activists say PoP is terrible for the ecology because it is non-biodegradable and can take many months to dissolve; clay takes about an hour. A small 2017 study of Hyderabad lakes showed that post-immersion, the hardness, chlorinity, salinity, and turbidity of the water increase and oxygen levels plummet.

However, there is still not enough definitive proof of this to ban the use of PoP idols.

Meanwhile, toxic paints on the idol, while making them hugely attractive, worsen the water bodies’ condition. Add to all this the flowers, fruits, incense sticks, polythene bags—all offered to the god in veneration and then ritually dumped—that remain on the shores, decaying and posing a huge health hazard for months.

Chetan Varaprasad, a third-generation idol-maker with a massive workshop close to Vijay’s, makes only 20% of his 1,000-odd idols using clay; the rest are made of PoP.

A supplier to up to 40 local pandals—decorated canopies that have now come to represent neighbourhood festival-organising teams—making a Ganpati idol over three feet in height using clay is next to impossible for Varaprasad. “Clay is too heavy to handle in big sizes and time-consuming,” he says. “The finishing on PoP is superior, too. Besides, clay is also more prone to cracking.”

Buyers, too, consider clay “heavy and fragile,” a worker at Govind Arts, another Ganesh idol stall in the area, explained. Customers steer clear of clay statues, fearing they will be damaged in transit or may cause accidents. For every clay statue Govind Arts sells, five PoP statues fly off the shelves.

Ecological viability Insoluble, forms an impermeable layer on the bottom of pond or lake Dissolves quickly, the residue is like a harmless layer of soil. The government on its part is backing clay. It orders clay statues for its own functions and runs awareness drives. However, it is not easy to change the artisans’ medium.

“There are very few artists left. Everybody wants fast money today,” Vijay, who has hired four to five workers, said.

Varaprasad’s workshop and Govind Arts, both of which have been around for over 10 years, each have between 20 and 25 workers. But they are not all from Hyderabad. During the Ganpati season, workers are called in from Pen, a village in Maharashtra that’s famous for its Ganesh idols, and Madhya Pradesh to fill the talent gap.

And wooing talent requires higher profitability, which clay doesn’t guarantee. Some sellers, though, are trying to create demand for less-damaging alternatives.

While Govind Arts is predominantly focused on PoP, it recommends clay idols to every customer. The firm has also begun selling papier-mâché Ganesh idols this year. However, they also miscalculated a little, planning to make 100 statues but only managing nine. One papier-mâché idol took 15 days to complete.

So next year, Govind Arts will begin preparations well before April.

Meanwhile, there have also been other symbolic attempts at making the festival more eco-friendly.

For instance, some clay idols now come filled with seeds, so people can plant the idols in their homes rather than immerse them. There’s also the chocolate Ganesh trend, wherein the idol is immersed in milk and distributed among poor kids. Hyderabad-based NGO Sprouts Environmental Trust makes idols that fish can eat. Sugarcane and coconut husks are also being used.

Though customers are also becoming more environmentally-conscious, these options still remain far costlier. This is how the price of a two-feet idol at Govind Arts varies by material:

The ecology is priceless indeed. But for the buyer of Ganesh idols, it still boils down to how much it is worth. #KhabarLive