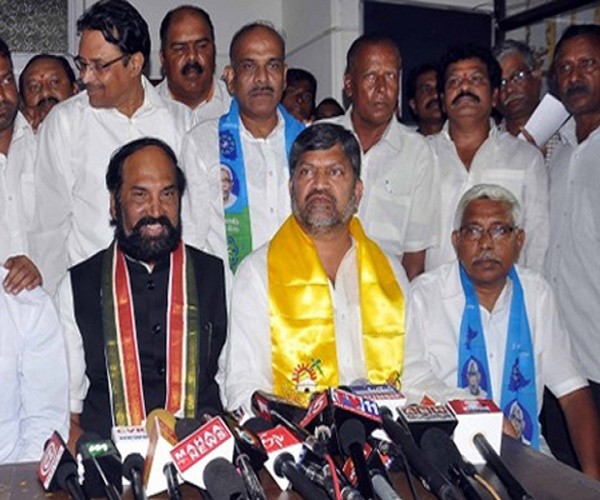 The Congress bid to stitch up Mahagatbandhan type grand alliance in Telangana continues to face hurdles over seat sharing. The demand of TDP, CPI and the Telangana Jana Samithi for more seats is unpalatable to congress which does not want to depend on allies to come to power in the post poll arithmetic.

According to sources, the TJS wants 35 seats, while the TDP proposed to contest in as many as 21 seats. The CPI submitted a list of 12 seats which it wants to contest . As the allies make such demands, the congress will be left with just over 50 seats . However, the leaders of allies tell in private that this is only a wish list and ultimately there will be adjustment.

Meanwhile, the congress reportedly offered only three seats to TJS . Such a wide difference in what is sought by the allies and what is offered by the congress makes the seat adjustment an uphill task.

Once the number of seats finalises, there will be dispute over identifying the particular constituencies each party will contest as there will be competing claims in at least few segments. Subsequently, there will be a problem of satisfying the rebels to ensure united fight . Finally, the vote should transfer from one party to the other.

At the time of filing this report, it is learnt that the TDP and the CPI are ready to prune their claims substantially paving the way for a grand alliance. But, the TJS still remains stubborn. Meanwhile the Congress leadership feels that the TJS is an untested missile.

Besides, the TJS has sought the formation of a committee to prepare a common Minimum Programme which it calls the Martyrs agenda. The TJS is insisting that its leader Prof. Kodandaram should lead such a committee which not only formulates the agenda but would be monitoring such an agenda in case the grand alliance is voted to power.

Though the PCC chief is reportedly agreeable to such an idea, the Congress party has its own apprehensions over such a proposal especially with reference to post poll monitoring of the agenda. The Congress wants to confine the role of any such committee headed by Prof. Kodandaram to the drafting of the agenda only. The Congress fears that this should not lead to any claims for Chief Minister from the allies given the experience of Karnataka.

The Congress high command is not so favourable to accord to Prof. Kodandaram a position akin to UPA chairperson, according to sources in the party.

However, the congress is convinced of the fact that it cannot on its own dislodge KCR and is desperate to have alliances. The TDP and CPI are fighting a battle for survival and henceforth more than keen to join a grand alliance. Thus, the opposition finding the grand alliance a win-win opportunity is politically committed for such a conglomeration though the devil lies in working out details.

Meanwhile TRS has intensified its attack on opposition primarily aimed at frustrating the formation of any possible political alliance led by congress. . The primary argument of the TRS is on the role of Andhra leaders in Telangana politics . This refers to the presence of TDP led by Andhra Chief Minister , N Chandrababu Naidu in the grand alliance. KT Rama Rao spearheaded the attack when he specifically targeted not just the Congress but even Prof. Kodandaram.

Meanwhile even if the congress , TDP, CPI and the TJS manage to arrive at an understanding, there will not be a joint opposition taking on the KCR juggernaut. The BJP and the CPI(M) are not part of this opposition unity exercise making anti TRS vote split rather inevitable much to the advantage of KCR. #KhabarLive

Amaravati Is Naidu’s Pet Project And It Is Yet To Come...

#WorldCancerDay2019: With Lifestyle Changes, Cancer Can Be Prevented