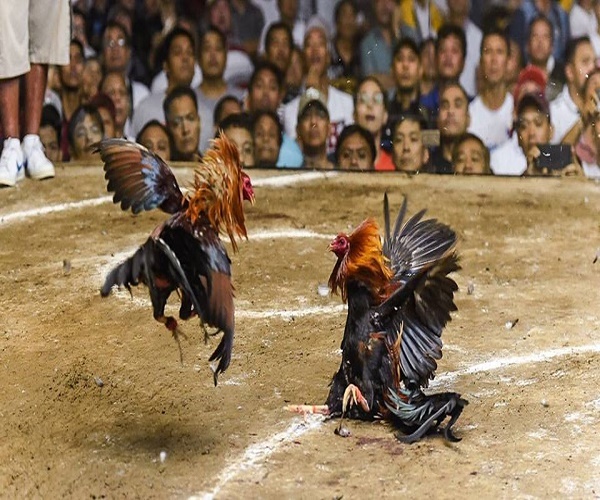 Cockfights are part of an age-old tradition in both the Telugu States more so in Andhra Pradesh during the Sankranti festival. With the festival just around the corner, the mango plantations located near the Andhra-Telangana border are packed with contenders and bookies and spectators of cockfights are geared up for some intense punting.

This despite the fact that the Supreme Court had issued an order in 2018 banning the practice. The leaders come up with interesting arguments. Bullock cart races, horse races, Jallikattu etc also involve animals.

But there is no ban on those events and hence there is no reason why anyone should object to cockfight which is a tradition and part of celebrations. Rearing of these special types of birds exclusively for cockfights provides employment to many farmers who spend huge amounts to prepare them for the annual event.

Punters and cockfight organisers are ready for the event. While the Sankranti celebrations in places like Eluru have started early, arrangements have reached near completion in Konaseema villages, the home turf of the Andhra Pradesh Home Minister Nimmakalaya Chinnarajappa.

The police as usual issued directions and notices saying that it would not allow cockfight if betting is involved. This year they have also demolished some of the tents and other arrangements made for the event in some places. All that to tell the court that they are serious in implementing the court order.

With elections just a couple of months away, they feel such events will help them to go closer to their constituents and improve their chances in election. Since law makers themselves participate in it, police mostly turn a blind eye to these events though large amount of money changes hands in the name of betting.

The betting and cockfight which were till recently considered to be an exclusive event held in East and West Godavari districts of Andhra Pradesh has now been adopted by other districts like Krishna district and has spread even to certain bordering districts in Telangana.

Cockfights are also organised in discreet locations near the border to avoid getting caught by the police. The lawmakers personally supervise the arrangements and take part in these events actively. They all say that the court’s decision has to be honoured in letter and spirit and also appeal to people not to tie knives to the legs of the birds which are brought to the arenas. But fact remains that this appeal is hardly honoured.

Interestingly, the contenders and punters from Telangana briefly flee the State by crossing over to Andhra sometimes, just 50 metres away from the border and set up their betting camps in the neighbouring State. This way, they beat the Telangana cops whose jurisdiction ends at the State borders. What a scene it would be to watch crime happen right in front of your eyes when you can’t do anything about it!

The Andhra police which should act, turns a blind eye towards this large-scale betting since it is a prominent cultural marker supported by politicians, industrialists and other important sections of the society. The fighting pits are located in Nellipaka, Chodavaram and Laxmipuram near the Andhra-Telangana border. To sum up, ‘courts propose politicians and punters dispose.’ #KhabarLive

#WorldTBDay: The ‘Lung Health’ Union World Conference Will Be In Hyderabad...