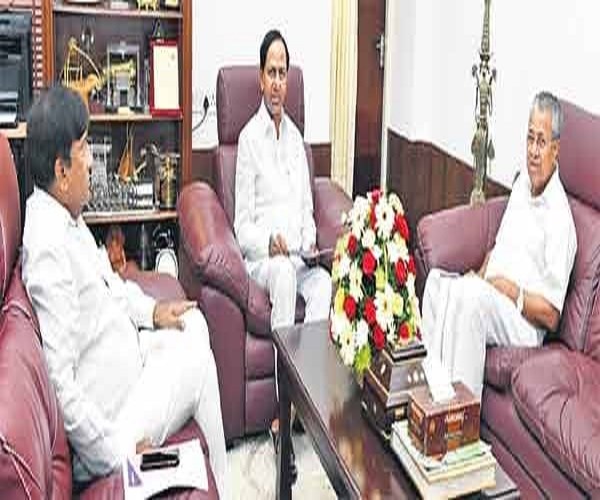 Again in Spotlight Telangana Chief Minister K Chandrasekhar Rao met his Kerala counterpart Pinarayi Vijayan , in a move widely believed to be an attempt to rope in the left in his proposed federal front. KCR has already discussed the issue with TMC, JD(S), DMK ,SP, JMM leaders and his son, KT Rama Rao reached out to YS Jaganmohan Reddy.

This is for the first time KCR is talking to the left leaders on the federal front question. KCR’s left reach out program assume significance in the time when Rahul Gandhi is pitted against the Left in a seat from Kerala. Pinarayi Vijayan and Kerala CPI(M) unit is vehemently opposed to any truck with congress which their West Bengal comrades are proposing.

Telangana Chief Minister K. Chandrasekhar Rao who floated the idea of a non-Congress and non-BJP Federal Front, is said to be trying to convince other parties about his seat matrix theory, without much success.

Sources close to the Chief Minister said that the TRS chief has reportedly told other leaders like BJD’s Naveen Patnaik and Kerala Chief Minister and Communist leader Pinarayi Vijayan that regional parties would win most of the 150 Lok Sabha seats in the five southern states and would play crucial role in the government formation at the Centre.

In the current Lok Sabha elections, Mr Rao claims the TRS and YSR Congress together would win around 40 seats in both states. If the Biju Janata Dal, DMK, JD(S) and the Left Democratic Front in Kerala join the Federal Front, they could play a crucial role in deciding the future Prime Minister of the country.

However, two regional parties in the south – the JD(S) and the DMK are Congress allies and have supported Congress president Rahul Gandhi for the PM’s post. DMK chief M.K. Stalin, therefore, is not so keen on Mr Rao’s political alternative. Similarly, neither Trinamool Congress chief Mamta Banerjee nor BSP chief Mayawati nor Samajwadi Party chief Akhilesh Yadav has openly supported the idea of the Federal Front so far.

Though KCR is harping on the seat matrix, without the support of the other parties it will be difficult for him to achieve his dream.

KCR is particular about a non BJP front that keeps Congress out as the latter is his principal political rival in the state. The CPI(M) in its political line adopted at its party Congress said that there will not be any electoral alliance with the Congress though its objective is to defeat the BJP.

Thus there is a convergence between KCR and comrades in keeping Congress at bay while evolving an alternative to BJP. However, this thesis has inherent limitations. KCR would prefer to join BJP led NDA rather than congress led UPA if the choice boils down to either of the two national alliances. Such an idea is completely unpalatable for the left which is ready to go to any extent to dislodge the BJP.

The CPI(M) has proposed to congress to avoid mutual contest in West Bengal. However, the idea did not materialise due to congress intransigence. The CPI is already part of congress led alliance in Telangana. The TRS and the left can safely sail together if federal front is truly non-congress non-BJP. But, such a possibility seems to be a distant reality.

Any post poll alliance cannot survive unless it is supported by either BJP or the Congress. KCR will not be averse for a BJP supported federal front, while the left may not oppose congress backing any such federal front. The left supported AAP in Delhi, DMK in Tamil Nadu and many other parties with an objective to defeat BJP at least in the constituencies which it has not fielded candidates.

The non BJP parties still have the suspicion that KCR may join NDA if situation warrants so. The left too has such an opinion evident from the fact that they opposed KCR in both Assembly and Parliament elections. Given these contradictions, the federal front is still in the realm of imagination. Unlike in the past, the left shows no serious interest to put together any such third front devoid of common understanding and united strengths.

The CPI(M) in its resolutions clearly felt that they do not have confidence in the commitment of regional parties to defeat either BJP or congress. Thus, the federal front is still in making. The post poll arithmetic alone can define and determine the nature, scope, extent, the character and the colour of federal front. #KhabarLive