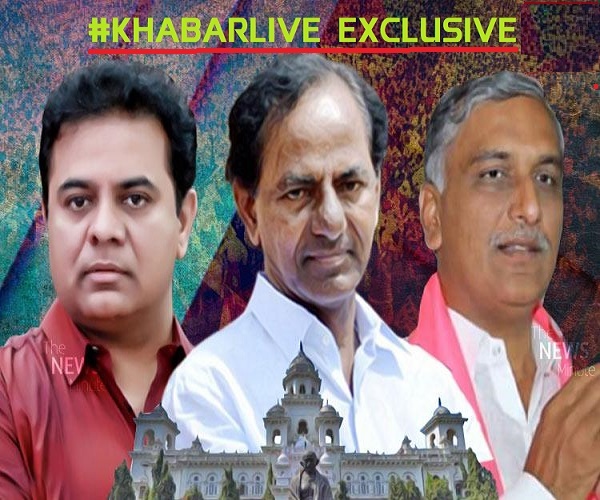 TRS President and Telangana CM K Chandrashekhar Rao appointed his son and Siricilla MLA K Taraka Rama Rao as the Working President (Executive President) of the party on Friday. According to a party release, “KCR has decided to concentrate more time on National Politics to bring a qualitative Change in the National Politics.” Party sources say that this was a unilateral decision taken by KCR.

The release further stated that KCR has taken this decision “to entrust the responsibility of party affairs to a most trusted and efficient person”, since the CM himself would be preoccupied with “governance activities like expediting construction of irrigation projects and also to implement the electoral promises in letter and spirit.”

This decision comes close to the heels of KCR’s long-time party colleague and confidante Mahmood Ali being sworn in as the Home Minister in the state cabinet, which quelled rumours of KTR being made the Number 2 in the government. The party recently won the state assembly elections bagging 88 out of 119 seats.

Meanwhile, the move to make KTR the operational head of the party is being seen by many as a signal for KTR’s eventual takeover of the party and as the CM of the state. “As of now, KCR wants to concentrate more on Delhi, but they are likely to follow the footsteps of how Akali Dal transferred power from Prakash Singh Badal to his son Sukhbir. KTR is first being given the party to learn political organising and gain experience on that front, before being given a senior leadership position in the government, like a Deputy CM. But there is still time for that,” a party insider said.

The statement too drops enough hints at KCR’s willingness to trust his son with the future leadership of the party and the state, calling him “most trusted” and “efficient”, and stating, “KTR who has been successfully and efficiently handling and performing the roles and responsibilities of both party and government, has been entrusted with the new role of working president by KCR. CM KCR strongly believes and confident that the working style, the commitment, the direction and leadership qualities of KTR will help in leading the TRS party efficiently and effectively by him in the days to come.”

However, party insiders and watchers close to the family point also point out that there is some truth in the statement that the appointment is so KTR can look after party affairs while his father can look after the government and Delhi affairs. They say, that KCR isn’t really in a hurry to hand over the reign to his son now, but there was a possibility of him resigning two or three years down the line to pursue the Federal Front more seriously, ahead of 2024 polls.

“What will he do if he is not the CM? There are others who are far more senior to him in the national arena, so even when he is concentrating on national politics, his post as CM is important for him. It won’t be enough to be just the party President,” the source said.

Even as the TRS tries to shape a non-Congress, non-BJP “federal front” ahead of the General Elections in 2019, the party is facing the unique challenge of positioning itself as a force neutral to the two major national parties, and yet one which would be willing to work with any government at the Centre to protect the interest of the states. KCR would have to pay a lot more attention to national politics to guide his ship along these choppy waters, say insiders.

Another party watcher pointed out, “KTR has the power and influence already, this is making it official so he will also have the responsibility.” He added that making KTR the Working President is also to ensure that the party does not slack in the upcoming Panchayat elections and General Elections in 2019.

“The clean sweep has not made them want to take it easy. KCR is very sharp and shrewd, he knows that if he does not perform well in the local polls and national polls then it will be a setback for him. Now KTR will have to strengthen the organisation and ensure victories in these polls.”

Even so, the general sense in the party is that KCR is far more willing to handover the reign to his son eventually. Unlike the DMK, where Karunanidhi held on to the President’s post until the very end and MK Stalin was made the Working President only when his father was physically and mentally unable to look after party affairs, KTR has been given near-total leadership of the party already. MK Stalin’s takeover too was after a ‘democratic process’ within the party, while KCR’s decision to elevate his son has been swift and unilateral.

However, KCR might have to follow Karunanidhi’s footsteps in dealing with other members of his family. Karunanidhi avoided a conflict between his grand-nephew Maran and his son by elevating Maran as a union minister. Sources say that KCR too has a similar plan for his nephew Harish Rao, the only competitor for his son.

Though Harish Rao won with a thumping majority from Siddipet, there is a possibility that he will contest Lok Sabha polls in 2019. And if the TRS does become a part of any coalition front that comes to power, Harish Rao will have a larger role at the Centre. #KhabarLive