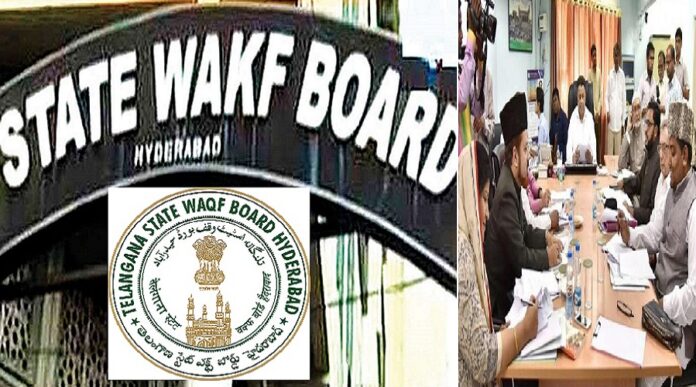 After the serious and deep observations on wakf properties controlled by the Telangana wakf board is under threat. Land grabbers, political mafia, big brothers, and some influential authorities are dominated the entire operations of the country’s richest wakf board.

The original wakf properties are not known after the digitalization of entire records under the Telangana government. Now, the facts and figures are different. There is a severe need to enquire about the facts about these irregularities by an independent sitting judge panel.

A visit to the official website of the Telangana Waqf Board reveals some startling figures about Waqf properties in the state. According to the statistics on the website, the state Waqf board has 33,929 institutions located across several districts in the state.

Speaking to #KhabarLive, the Chief Executive Officer of the State Waqf Board, Mohd Qasim, felt that the lack of staff is the main limitation of the Waqf board. He said, “We have only 96 regular staff out of a total of over 300 positions. We now hire staff on a daily wage and contract basis for the work to be carried out. We have requested the state government for permission to hire more staff that has been long pending.”

When asked about the widespread encroachments of Waqf properties as reflected in the data available, the CEO said, “The statistics available are from 2014-2015. The data is from the first survey carried out in the 1960s and ’70s. It was published in 1989. The second survey was carried out but it wasn’t published because of pending permissions.”

“We are carrying out a status survey now as we also have to submit it to court as well by September 11. We have only 10 Waqf inspector auditors who are working for the 33 districts in the state. We are acutely short-staffed,” added Qasim.

The Waqf properties protection cell president Nayeemullah Shareef felt that it was due to the incompetence of the board members that the encroachment was taking place. He said, “The TRS government had promised in its election manifesto that Waqf properties will be protected and judicial powers will be granted to the Waqf Board.

Vladimeer Khatoon, the counsel for Mohd Illyas, who had filed a Public Interest Litigation (PIL) in the High Court said a client approached her about having been denied permission for two burials at a graveyard in Gandhamguda, in the outskirts of Hyderabad. That is when they decided to file a PIL. She said, “While hearing the petition, the court asked for a detailed report to be submitted about how many graveyards are still existing today under the board and whether any action has been taken in regards to the encroachments. They have also asked about what action has been taken against those who have denied burial at the graveyard.”

High Court pulls up Waqf Board while hearing the petition, a bench comprising Chief Justice Raghvendra Singh Chauhan and Justice B Vijaysen Reddy asked whether the complacent attitude of the board officials was the reason for the encroachment of Waqf properties. The court questioned the chairman and officials as to why they have consistently failed to protect Waqf properties. The court also questioned as to why FIRs and criminal cases were not filed in many of the cases of encroachment. The court felt there were several reasons for the court to believe that it is the board’s inefficiency that is leading to the encroachments.

According to Mohammed Habeebuddin, a Waqf and heritage activist there is a ‘political mafia’ controlling the Waqf Board. He said, “A large area of graveyards has already been encroached upon. There are no efforts to remove encroachments. The government should find a solution to this problem. A Waqf Commissionerate should be formed. The board is like a watchman and the main responsibility stands with the government. But the board is ignoring it as encroachers are politically connected.”

Several activists have raised concerns about the way issues are being handled by the Waqf Board. They feel that the Telangana government should constitute a Commissionerate to find a solution to this long-lasting problem.

Nayeemullah Shareef, the Waqf board properties protection cell president, said, “It is observed that whenever the board is formed, such illegal activities rise to its peak. Whenever Special Officers run the Waqf Institution, it becomes almost fair and smooth.

Tainted persons jockey onto the board membership positions and start working for their self-interest. Therefore, we urge the state government to form the Waqf Commissionerate to fulfill the promise and to focus on the welfare of the community, with the properties their forefathers left for them.” #KhabarLive #hydnews