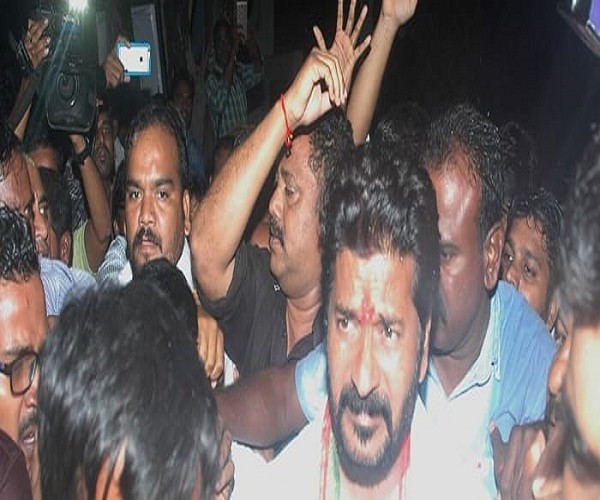 It may be true or may not be true. But the timing of the IT raids on the house and properties of Congress leader A Revanth Reddy has raised several questions. The Opposition and the public feel that it is a political vendetta which is being unleashed against Opposition party leaders. This is not to say that political leaders commit no crime or any action against them is wrong. If the allegations are true, surely there is nothing wrong in the authorities initiating the action against whoever it may be.

But then, the timing of the action does give rise to such doubts. In Andhra Pradesh, an advocate suddenly decides to file a case against the State IT minister Nara Lokesh but fails to provide any evidence.

In Telangana, the government digs out a very old case of alleged human trafficking and arrests Congress leader Jagga Reddy. Now, on the day the newly-appointed working president of Telangana Congress A Revanth Reddy was to launch his poll campaign, suddenly raids take place. Efforts are on to establish that he is involved in money laundering cases. The only defence the State government has is that raids were conducted on the premises of TRS MP P Srinivas Reddy as well. But then people perceive it as part of a political drama to avoid criticism. As I said, it may be true or may not be. The swift action comes based on a complaint lodged in July this year by a Hyderabad-based advocate Immaneni Rama Rao with the Enforcement Directorate authorities who had, in turn, forwarded the complaint to the IT department. The petitioner says that there is enough evidence to nail Revanth.

The Congress alleges that the State government is hand in glove with the Centre and was resorting to such acts to demoaralise its leaders and cadres. The ruling party leaders including K Kavitha refuted this allegation that it was politically motivated. Quoting the recent Supreme Court judgement, the apex court, which handed out a slew of directions for curbing criminalisation of politics, they said the BJP was not a friendly party of the TRS. The Centre did no special favour to the State and several assurances given at the time of bifurcation were yet to be implemented. But then in politics, two plus two need not necessarily be four. It can be 22 also.

It is a fact that there is a strong undercurrent among people against the government on certain counts. If Revanth Reddy is arrested, which appears to be imminent, then the poll battle can certainly take a different turn and has all the potential to adversely affect the image of the TRS. This issue may not prevent the TRS from coming back to power but can certainly give a boost to the prospects of the Congress to some extent.

The talk in the political circles is that this is just tip of an ice berg. Once Revanth is arrested, the BJP will turn its focus on Andhra Pradesh and will see that the investigating agencies issue notices to AP Chief Minister N Chandrababu Naidu in the ‘cash-for-vote’ case as part of operation Garuda.#KhabarLive

Indian IT Profesionals In A Lurch As US H1-B Visa Policy...

Why A ‘Hindu Customer’ Refused To Accept Ordered Food Through A...