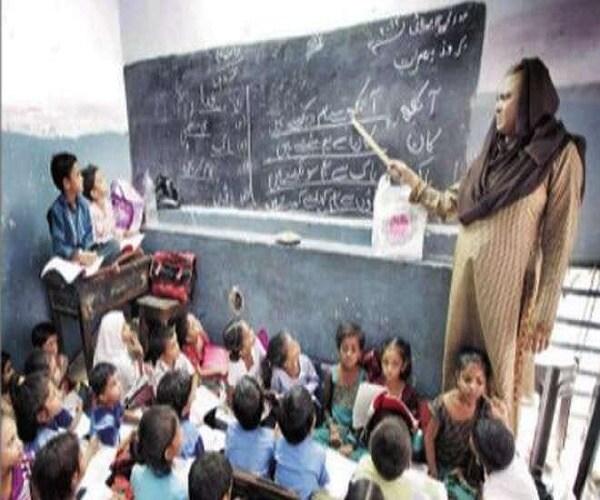 Urdu schools are on the verge of extinction in Hyderabad. Earlier, there used to be hundreds of Urdu medium schools, justifying the fact that Urdu is the mother tongue of Hyderabad. The schools were supported and run by the government but as time went by the government and private schools started teaching in English and other languages. The Urdu students face difficulty in understanding and they are forced to mug up.

Fazlur Rahman Khurram, who runs three Urdu schools, said till the child reaches 4th standard he should be taught in Urdu language so that one can understand the values of Urdu culture and when the child comes into higher standard, s/he can choose the language of preference. But the child in tender age must be taught in Urdu as there would be no extra burden or pressure to learn other languages. Just like an adult finds it difficult to learn French, Russia and Spanish then how can a small child learn three languages hence, Urdu should be taught in schools.

Is Urdu dying?
Already on the wane with just about six residential high schools in the state offering Urdu as medium of study, Telangana’s second official language could soon be wiped out from these institutions as well. At least so it seems from a recent order issued to teachers of these schools.

While there has been no written communication from authorities yet, teachers said they have been orally instructed to not conduct any fresh admissions for the 2018-19 academic year.

“Although many students are willing to take admission in the Urdu medium, we have been strictly asked by the officials to not admit any new student in this medium. Issuing of such directions is not fair on the officials’ part,” said Mohammad Masooduddin Ahmed, general secretary, Telangana Urdu Teacher’s association. He added: “The state is supposed to promote the language by establishing new schools. Instead, they are converting the existing schools into English medium.

They have no right to do so and must secure a presidential order for the same.” The state has 206 schools under the Telangana Minorities Residential Educational Institutions Society (TMREIS), of which six are Urdu medium high schools. Every school has 40 students per class. This apart, there are two junior colleges, with 40 students each in the MPC and BiPC stream and 30 in the CEC stream. According to sources, these colleges too might be asked to follow suit soon — convert from Urdu to English medium.

Teachers termed the latest move of TMREIS department as the government’s attempt at gradually shutting down these schools, which are already reeling under a shortage of teaching staff. “When it comes to schools for day scholars (there are 76 high schools, 1,800 primary schools, four junior colleges) the situation is the same. Urdu medium students are not given enough opportunities to study their mother tongue,” said Syed Shaukat Ali, national cordinator, Telangana State Minority Welfares Association.

Considering the prominence of the Urdu language in Telangana, the authorities should make every effort to preserve and promote it, instead of pushing it towards extinction. If there is indeed a demand among students to opt for Urdu as their medium of instruction, officials must take measures to strengthen these schools/colleges by appointing teachers and refurbishing infrastructure. Insisting them to convert to English medium is unfair.

No Urdu ‘Second Language’ Status
The state government has failed to promote Urdu even though it is the second official language of Telangana. In fact, government-managed educational institutions where Urdu is the medium of instruction are the victims of official apathy.

A report prepared by the Telangana Minorities Welfare Department speaks about the magnitude of this neglect. The report is meant to help the government understand the situation and prepare a plan of action.

It explains at length the situation of Urdu educational institutions. It details the absence of teachers, inadequate furniture and other infrastructure. In a state that boasts of 24×7 power supply, 203 Urdu schools are without electricity.

“The government is keen on introducing digital classrooms across the state. Ironically, there is no power in several schools, including some in the city itself,” points out social activist S.Q. Masood.

The report points out that there is a dearth of higher educational institutions offering Urdu as a medium of instruction, so students passing out of the 340 Urdu high schools in the state, are deprived of higher education. Just 20 per cent of intermediate colleges, mostly in towns and cities, teach in Urdu. “There is a huge dropout rate, especially among girls. Parents are reluctant to send the girls to far-off places to attend college,” says a member of the Urdu Teachers’ Federation.

The city-based Government Junior College Maisaram is a classic example of this neglect. The college offers only CEC course for the last ten years although it has orders to enrol students for BiPC, MPC and vocational courses.

The report highlights the need to implement Urdu in letter and spirit. It includes various recommendations of the Sachar Committee, including Muslim reservation in jobs and educational institutions. Abid Rasool Khan, former chairperson of the Telangana State Minorities Commission says that the government should conduct a thorough survey of the language. “If it is sincere, it should conduct a survey. Mere lip service will not help,” he felt.

There is also the question of what sort of jobs will be available to students who graduate from Urdu medium schools. The jobs are mainly in government services. The recent notification of 66 posts of Urdu translators has brought some cheer, but not much, given that the Telangana State Urdu Academy expects about 10,000 applications for these posts. There are about 6,000 posts for Urdu medium teachers across the state in various streams and similar job openings in higher educational institutions.

Private institutions employ Urdu speakers to teach the language, as parents are keen that their children learn the language.

Urdu experts’ shortage a worry
The biggest challenge in conducting entrance exams for various college courses in Urdu, as proposed by the Telangana State Council of Higher Education (TSCHE), is translation. “The terminology and shortage of Urdu experts and translators is a big problem,” says Professor S. Ramchandram, Vice-Chancellor of Osmania University.

This year TSCHE will conduct all the Common Entrance Tests (CETs) in three languages — English, Telugu and Urdu. The latter is the latest addition. Since TSCHE has only two months time to hold eight CETs, the council is looking for subject experts in the Urdu language, since it has been declared the second official language of the state.
Even Osmania University does not have sufficient Urdu teachers; just five for 60 Urdu students.

Mr Ramchandram said, “Though it’s a boon and encouragement for Urdu aspirants in the state, it is a little difficult to conduct the entrance tests in Urdu because state universities are facing severe staff crunch in the Urdu department.”

He also said that translation is a problem because of the terminology. “Sometimes it is difficult to translate into Telugu but over a period of time things have been resolved. But when it comes to Urdu, it’s even more difficult because of lack of the terminology and shortage of Urdu translators,” Ramachandran said. Pari Reddy, chairman of Telangana State Council for Higher Education, said, “We are exploring the proposal of Urdu exams and looking at the pros and cons. We came up with this proposal only after Chief Minister K. Chandrasekhar Rao received a representation from the minorities to conduct exams in Urdu.”

If there is a staff crunch in OU then we will look for Urdu experts from other universities.”
“May be to solve the issue we can selectively do the translation for the entrance exams in Urdu. There are some oriental colleges for Urdu, and even they often complain about the staff crunch. Engineering is basically taught in English and the entrance test to MTech cannot be in Urdu,” he said. #KhabarLive