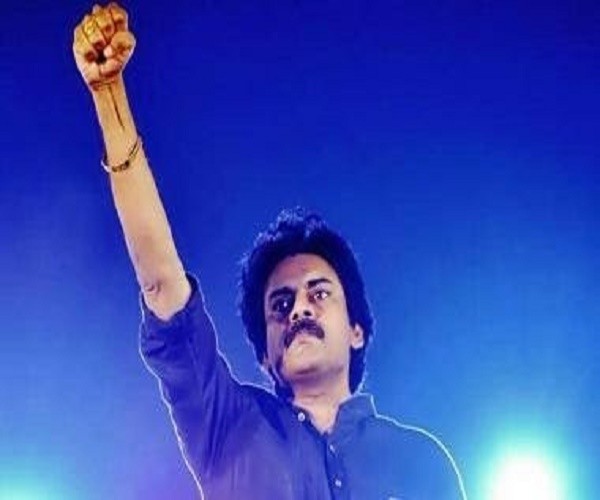 Pawan Kalyan’s assault has a script. He is accusing Jaganmohan Reddy of being in bed with the BJP while accusing Chandrababu Naidu of having failed miserably. His plan is to project himself as the sole saviour of Andhra interests.

If the fourth anniversary public meeting of the Jana Sena in Guntur was a Pawan Kalyan movie, it would have been a blockbuster. His speech had the right emotion, struck the right chord, packed quite a punch and showed the courage to take on the political biggies in Andhra Pradesh.

The event was important for Pawan as the actor-turned-politician has not quite been taken seriously within the state’s political arena. He is spoken of as an extremely temperamental person who has his heart in the right place but not the maturity and sagacity to navigate the system. That he would be good at lone wolf attacks but cannot shepherd a change. That his call sheet approach to politics in the last four years means his events are mere entertainment value. That with no organisation to speak about and fans having no experience of electoral politics, he would come a cropper at the EVM.

In March 2014, when he launched his party with a five star hotel as a surprise venue, Pawan was all anger and bluster. On Wednesday evening, he was more directed in his attack, using emotion more as a highlighter rather than indulging in a rant.

Most expected Pawan to go soft on the Telugu Desam Party (TDP) and vilify the BJP. He did go after the ruling party in New Delhi, speaking initially in English so that Arun Jaitley could understand. But the moment he lapsed into Telugu, it was as if Pawan was playing a double role because the “villains” in his script changed. On target in the vernacular, were Chief Minister Chandrababu Naidu and his son Nara Lokesh. This is significant because Lokesh, who is the IT minister in Naidu’s cabinet, is also seen as the CM-in-waiting if the TDP wins in 2019.

Not that any proof was presented of the allegations of corruption he levelled at Lokesh, but then in keeping with the current practice of throwing muck and hope it will stick, Pawan accused the TDP number 2 of having links with Shekhar Reddy, former member of the Tirumala Tirupati Board.

Reddy was sacked by the Andhra government in December 2016 after over Rs 130 crore in cash and gold were recovered during raids by the Income Tax department in Chennai. Reddy, a big player in the sand mining business, was said to have been appointed to the Board in 2015 on the recommendation of political heavyweights in the AIADMK but it is the first time that Lokesh’s name has been linked to him.

“Is Chandrababu not aware of the corruption by Lokesh or is he supporting corruption? Contractor Shekhar Reddy was arrested with crores of currency notes during demonetisation and Lokesh was in touch with Sekhar Reddy,” Pawan alleged. He drew a link between this and Naidu’s inability to fight effectively for Special Category Status for Andhra, noting that Prime Minister Narendra Modi was aware of this corruption.

From a TDP point of view, it was important that Pawan occupy the anti-establishment space so that contesting on his own, he cuts into Jagan’s voteshare. But Naidu would not have bargained for Pawan going ballistic in this manner, even getting personal. “I believed in Chandrababu but if he speaks three words, there are six lies in them,” he said.

For years, the TDP leaders have derided YS Jaganmohan Reddy as an “economic terrorist” pointing to his cases of corruption. Naidu has on many occasions poked fun of Jagan, saying he has to spend more time inside courts while dwelling on how clean he is. To find his image being sullied by one of his own allies, would have come like a bolt from the blue. With Pawan claiming Andhra under Naidu has become scam Andhra, the friendship between Pawan and Naidu is a thing of the past.

Privately, most leaders in Andhra, cutting across party lines, admit there is no chance of the Centre granting SCS. They are aware if Andhra is given, the list of states demanding the same will grow and create a headache for New Delhi. But by linking the issue to Telugu pride, Pawan is looking to make political capital.

Like all things dramatic, Pawan has threatened to go on a fast-unto-death for SCS, a la Potti Sriramulu, whose fast in 1952 compelled Jawaharlal Nehru to concede to the demand for a separate state for Telugu-speaking population, to be carved out of Madras state. Or like K Chandrashekar Rao, whose fast in 2009 made the then UPA government agree to the bifurcation of Andhra Pradesh.

Pawan’s assault has a script. He is accusing Jagan of being in bed with the BJP while accusing Naidu of having failed miserably. His plan is to project himself as the sole saviour of Andhra interests.

But there is obvious suspicion over who is ghost directing Pawan Kalyan. In the past, he has accused the BJP of giving two stale laddoos to Andhra when it was expecting SCS. But his soft approach towards the BJP in Guntur while attacking the rest, gives rise to doubts if the BJP is trying to do with Pawan what it is doing with Rajinikanth in Tamil Nadu. Build up Pawan as the man who can deliver, work out a workable formula under the AP Reorganisation Act and hammer out a BJP-Jana Sena alliance. #KhabarLive