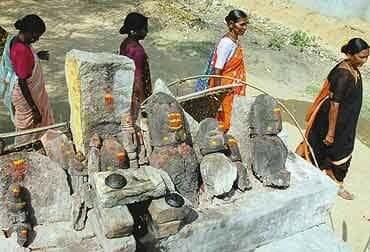 At the age of 10, against her wishes, Kalpana was married to a village deity Yellamma, and made a Jogini. Joginis are girl or women dedicted to god, who are then forced to lead their lives as sex slaves, having no agency over their bodies. It is only the women from the “lowered castes” of Madigas, Malas — categorized as Scheduled Castes, and Backward Classes — who are forced into this system, under the veil of religious faith.

This religious sanction allows the upper caste men in the village to sexually abuse them, and they have to beg to make a living. The parents dedicate them to gods, under coercion fearing ostracisation from the village, and for superstitious beliefs — like for good rainfall, to avoid epidemic diseases or to fulfill their vow made to gods. These women dance in funeral processions of the upper castes.

This practice was banned in 1988, and existed in several parts of Telangana, predominantly in the erstwhile districts of Mahabubnagar, Adilabad, Medak, Warangal and Nizamabad. Today, it clandestinely continues due to illiteracy, poverty and superstition.

Activists claim that though rules exists to eliminate the practice, there is no effective action by the government.

A one-man Commission formed in 2010 studied about this practice in the united Andhra Pradesh, and estimated that there are around 80,000 Joginis in both the states, out of which 50,000 of them are from Telangana.

The commission report made several recommendations to rehabilitate the victims of this inhumane caste-based discrimination which include: to provide two acres of fertile land with water and electricity; to provide 2% reservations in government jobs exclusively for Joginis; provide free medical aid; provide shelter to old Joginis; constituting a committee to monitor rehabilitation schemes and eradicate the system; provide a separate fund exclusively for their welfare; among several others welfare measures to uplift them. However, these recommendations are yet to be implemented in Telangana. In 2014, they were disenfranchised, after the Joginis were excluded from the controversial Intensive Household Survey.

Here’s the transcript:
Kalpana from Mahabubnagar district in Telangana was ‘dedicated’ to goddess Yellamma as a Jogini when she was just 10 years old, this meant that Kalpana was a sex slave free to be sexually exploited by anyone in her village without a choice to no or even ask for money. Her parents died when she was young and it was her aunt who forced her into the Jogini system. She now has a 7-year-old child, which she is raising alone.

A Jogini is a child or woman to married off to a god, and once this is done, she cannot marry anyone else, and is forced to lead the rest of her life as a sex slave. This practice is limited to the marginalized Dalit and Backward Caste communities.

Yadamma, a former Jogini: There is no protection for us. Anyone can abuse us. Any man can come to our home. We can’t demand money for the sex work. As you’re a Jogini, you can’t make such demands, they say.

Hajamma, activist and former Jogini: “Just because they are born female, parents make them Joginis, as they would stay in the village and take care of them when they are old.”

Narsamma, former Jogini: “My parents had a superstitious belief that since I was a girl, I was to be made a Jogini. I don’t have children, so I adopted a girl. When she went to school the authorities kept insisting about her father’s name.”

Hajamma, activist: “Once a woman becomes a Jogini, there is a possibility of her being branded several things. Even if a person becomes a teacher, they would say that the Jogini’s son became a teacher, but identify as a teacher. The brand of Jogini affects our self-respect. It is discrimination. If a Jogini’s daughter gets married, she would be barred from visiting her maternal home. They make remarks like ‘Don’t know who all sleep with your mother’. And while abusing say that your’s is a worst family, who roam around in villages- so don’t visit.

Narsamma: “On Wednesdays and Fridays, carrying a slate we beg and eat. From the moment they make us Joginis, we lead a lonely life; we live alone and die alone. Both in happiness and misery we are alone. “The government didn’t provide us with anything. They didn’t give us a house. Even for the single women pension, we struggled a lot. That too when we put our father’s name in records instead of husband’s. In our documents, we can’t put God’s name as husband, right? After we struggled for 2-3 years they issued pension, but that meagre pension of Rs 2,000 would vanish in just a day if we fall sick.

These women were not even included in the Intensive Household Survey, which deprived them off ration cards.

As the government didn’t take any proactive steps to rehabilitate the Joginis at a policy level, an NGO called Operation Mercy India is working for their welfare and rights.

Angela Davis, Anti-Human Trafficking Project Coordinator, OMIF: “Though the Act of abolishing Jogini system came to existence in 1988, the rules were not framed.”

Angela Davis: Andhra Pradesh state first framed the rules, which Telangana adopted. Though the rules are framed there is no effective action.

Beryl Dsouza, Anti-Human Trafficking Project, OMIF: “There are published studies which establish that a Jogini is three times more likely to get HIV than any other Indian woman, and 10 times more likely to die from it. They suffer multiple chronic diseases including Sexually Transmitted Illnesses. They are 10 times more likely to get Human Papillomavirus (HPV), which is a precursor to cervical cancer. Approximately 97% of them suffer from mental illness like depression and 57% of them are likely to die by suicide due to lack of a support system. A lot of them are victims of alcohol and substance abuse. This is a societal failure. What we notice is that: the girl is initiated into drinking at a young age by her parents so that she becomes compliant in providing sexual flavours.”

A one-man Commission formed in 2011, estimated that there were around 50,000 Joginis in Telangana, who are mostly exploited by the Upper Caste men in their villages.

The administration in Narayanpet district where the prevalance of the Jogini system is high, has been trying to help the woman. Besides taking up developmental activities. It is focussing on their self-employment.

Yadaiah, Deputy Director, Scheduled Caste Development Department: “We are trying to design Narayanpet district as a role model which could be replicated in other regions which are affected by the Jogini system. The Joginis would be rehabilitated, and given a social status and thereby uplifted. This is the primary objective of the government.”

But for the Joginis a lot more work still needs to be done.

Narsamma: “Society looks down upon Joginis. They call us several names. Hey you abandoned bitch. You would have known things if you had a husband. You’re a Jogini! You are a slut, you sleep with many men. They make many such crass remarks. I can’t even tell those things.”

Hajamma: Even after a Jogini is rescued and rehabilitated by giving education. She still would be seen as a Jogini. So we should take actions to prevent the Jogini marriage itself. Once she gets branded as a Jogini. No matter how many years, they would always say, “Wasn’t she made a Jogini? Why is she getting married again?” Once married to a deity, another marriage cannot be performed, they say. We faced many such problems. We stopped 20 Jogini marriages, but people reject wedding proposal of girls who were formerly Joginis. A woman dedicated to god could be sexually exploited, but society doesn’t accept if she gets married. This is wrong. The Jogini marriages were wrong in the first place.” #KhabarLive

Will ‘Grand Alliance’ Aka ‘Prajakutami’ Be Revived For LS Polls In...