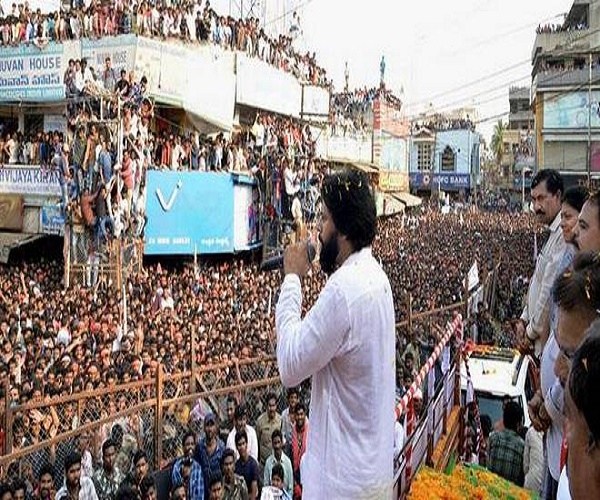 Though the district has a large population of Kapus, the community from which Pawan Kalyan hails, he also seems to enjoy the support of other communities, in contrast to the popular narrative.

The otherwise quiet and lush green interiors of Bhimavaram in Andhra’s West Godavari district are resounding with political clamouring by surging crowds, as actor-politician Pawan Kalyan from the Jana Sena Party (JSP) is contesting from the constituency.

The town and its surrounding villages form part of one of the 15 Assembly segments in the district. Political observers say that the West and East Godavari district play a crucial role in deciding who comes to power in Andhra Pradesh; pointing out that TDP swept 14 out of the 19 seats in East Godavari in 2014.

Unlike 2014, where the TDP and JSP were in an alliance, this time the two parties are going it alone. On the ground, one thing is evident – that Pawan Kalyan enjoys tremendous popularity among the people.

“Pawan Kalyan is speaking about a change and wants to offer an alternative. Though the votes are split between the TDP, YSRCP and JSP, we can’t deny that there is a silent wave in favour him,” says Srinivas, a small trader in one of the town’s busy centres.

ALSO READ:  An Open Letter To 'Amit Shah' By Telanganites!

While several feel that Pawan’s candidature from Bhimavaram will change the fortunes of the town and region as he is projecting himself as a CM candidate, others are sceptical whether he will pick their seat, as he is also contesting from Gajuwaka in Visakhapatnam. Opponents are also quick to label him as an ‘inaccessible politician’.

Pawan states that he is “fundamentally against caste-based politics,” but both TDP and YSRCP have fielded candidates from the Kapu community. While one is sitting TDP MLA Ramanjaneyulu Pulaparthi (Anji Babu), YSRCP has fielded Grandhi Srinivas.

The sitting MLA is facing anti-incumbency, while some locals claim that YSRCP candidate Grandhi Srinivas has been accessible to them over the last five years.

In a conversation with TNM, Pawan said that his party hoped to fight for the issues of the common public and will help elevate it.

Though the district has a large population of Kapus, the community from which Pawan Kalyan hails, he also seems to enjoy the support of other communities, in contrast to the popular narrative.

26-year-old Raja, an engineering graduate and a self-proclaimed ‘hard-core’ Pawan fan from Bhimavaram, argues that ‘confining’ the actor-politician to a single caste is naïve. “I’m not from his caste. Young people are liking his vision and we admire him for what he wants to do,” he says.

“If only caste matters, other candidates are also from the same caste. But the sitting MLA did not do anything and is reaching out to people at the last minute. Pawan has assured voters that he will solve Bhimavaram’s problems in six months,” he adds.

The municipality is said to be facing major sanitation issues like lack of a proper dumping yard and drainage, along with traffic problems due to narrow, under-developed roads.

While sitting MLA is facing anti-incumbency, there seems to be a positive wave for YSRCP candidate Grandhi Srinivas as people say “he is very much accessible and easy to reach out.”

Meanwhile, many are also drawn to the ‘alternate brand’ of politics that Pawan says the JSP is offering.

Rakesh Kumar, a driver, says, “He is assuring a change in the education sector, public health and in all fields. As everyone wants to see a change, mostly the youth and the women have hopes pinned on him.”

On the other hand, YSRCP, whose leader YS Jagan Mohan Reddy led a sixteen-month long statewide ‘Praja Sankalpa Yatra’ has also had a positive result and appears to have made an impact on people.

“He has been reaching out to people for 10 years. Let’s give him an opportunity and see. These people any way didn’t do anything. In my opinion, Jagan should be given a chance,” says Lakshmi, a roadside vendor in her late 40s, when asked about whom Bhimavaram is looking at. #KhabarLive