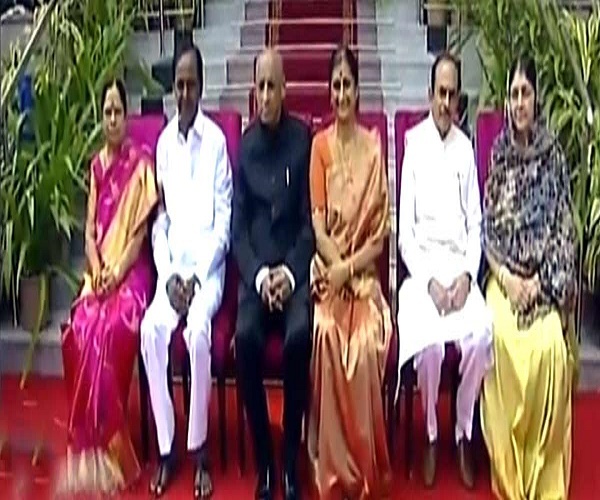 KCR popularly known as K Chandrashekar Rao, who steered his party TRS to a thumping victory in Telangana, took over the reins of India’s newest state for a second straight term Thursday. KCR, as Rao is popularly called, was administered the oath of office and secrecy by Governor E S L Narasimhan at a low-key ceremony on the lawns of Raj Bhavan in Hyderabad.

TRS MLC Mohammed Mehmood Ali, who served as deputy chief minister in the previous government, also took oath as a minister. KCR had Wednesday said that his new cabinet would be named after five to six days. In September, the 64-year-old had dissolved the assembly and decided to go for early polls in a bid to de-link it from the national elections, a gamble which paid off well. His party wrested 88 seats, a two-third of the 119-member Assembly.

The Congress, which formed a mega alliance of four opposition parties, was decimated to 19 seats. Chandrababu Naidu’s TDP, which was part of the alliance named ‘Praja Kutami’, was reduced to just two. The Telangana Jana Samiti and the CPI couldn’t even open their accounts. In run up to the elections, KCR, who championed the statehood movement, invoked ‘Telangana pride’ to counter Naidu. His party termed the Andhra chief minister as an outsider, a pitch that resonated well with the common men.

The BJP, which deployed star campaigners like Yogi Adityanath, won just a single seat. The effective strength of the TRS has further gone up after support from L Ramulu Naik, a Congress rebel who won from Wyra, and TRS rebel Korukanti Chander, who won from Ramagundem on a Forward Block ticket. A sidelined KCR left the NTR-founded TDP and formed the TRS in 2001 to fight for separate Telangana, which came into existence on June 2, 2014. Observers credit the massive election success to KCR’s populist schemes such as “Rythu Bandhu”, a social security pension scheme and a life insurance plan for farmers.

With the state polls over, KCR would now focus on the next year’s general elections, as he has said, the victory would enable the TRS to play a crucial role in national politics. He has been active in the national arena over the past few months, trying to stitch a non-Congress and non-BJP front. He has held meetings with several key opposition leaders, just like his arch-rival Naidu, and even flew to Kolkata once to meet Trinamool chief Mamata Banerjee. “…Congress-mukt Bharat..BJP-mukt Bharat…that is needed..,” Rao had told a press conference after his victory lap on Tuesday. #KhabarLive

No ‘Open Defecation’ In ‘Swachh Telangana’, IHHLs Completed In State

#WorldTBDay: The ‘Lung Health’ Union World Conference Will Be In Hyderabad...