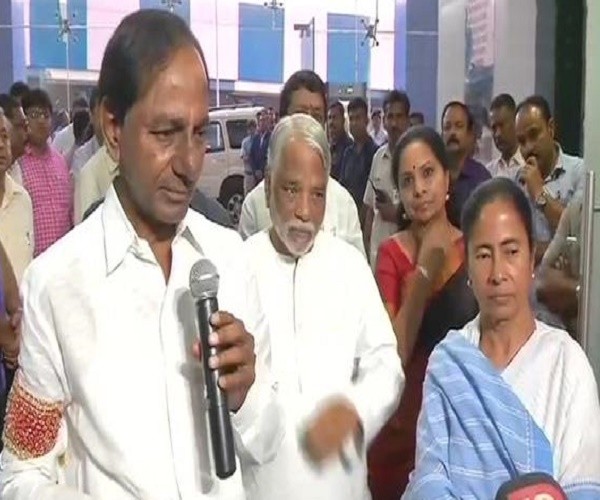 Telangana Rashtra Samithi president and chief minister K Chandrasekhar Rao has claimed his visit to Kolkata as a major step towards the formation of a third political alternative and that he had secured all the support from Trinamul Congress chief and West Bengal chief minister Mamata Banerjee.

But reports that have been doing rounds in the media circles quoting a senior TRS leader who was part of KCR’s delegation to Kolkata that the TRS chief had in fact received a big jolt from Mamata. She had in fact snubbed KCR, rather than supporting him on the third front issue.

According to these reports, the actual purpose of KCR’s visit to Kolkata was to fulfil his vow to famous Kali Mata temple.

However, he also wanted to see Mamata to discuss the third front issue since he had given a lot of hype to his role in national politics. Accordingly he took the appointment with her.

Since KCR is also chief minister of a state, Mamata extended all protocol hospitalities to him and his team of party leaders and advisors.

After exchanging initial pleasantries at the meeting, KCR started giving a lengthy lecture on the national politics, futility of the Congress and the BJP and his achievements in Telangana in the last four years.

Mamata paid a lot of attention to what KCR was saying. After some time, his secretary intervened and briefed her on the developments in Lok Sabha, saying the no-confidence motion had not come up for discussion at all as the AIADMK and TRS MPs stalled the House so that the Speaker rejected the motion on the grounds that the House was not in order.

Obviously, Mamata got serious and asked KCR as to whether it was true that the TRS MPs did not allow the no-confidence motion to come up in the House.

“On one hand you say you want to fight against the BJP and the Congress. On the other hand, you indirectly help the BJP by not allowing the no-confidence motion. Why this double game? Why didn’t you tell your party MPs to stop this?” she asked.

When KCR was about to explain his version, Mamata once again reprimanded him saying there was no clarity from the TRS on many issues.

She pointed out whether it was not true that he had lobbied through a Governor belonging to Velama community to secure the cabinet post to his daughter Kavitha and that the lobbying was still going.

Kavitha, who was also present in the meeting intervened and said she had no plans to join the NDA government. Mamata then told her that she would never make any loose comments without evidences.

“If you are really sincere, I don’t mind working with you. But, I don’t like people playing double games,” she said.

Why Hyderabad Police Didn’t Book ‘School’ Under ‘POCSO Act’ For The...

Is KCR’s ‘Superstition Or Strategy’ Behind The Delay In Telangana ‘Cabinet...