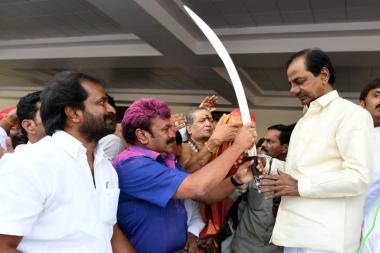 In a country where politicians are wishy-washy about their ambitions, K Chandrashekar Rao has come clean on what he has in mind. He announced that he wishes to lead a non-BJP, non-Congress alternative a.k.a. a Third Front at the Centre.

If you saw celebratory pictures coming out of Pragathi Bhavan, official residence of the chief minister of Telangana in the last two days, you would think K Chandrashekar Rao has scored an emphatic victory in an election.

Many a politician have come calling, some have reportedly spoken to him over the phone while crowds have been arranged by the Telangana Rashtra Samiti (TRS) city leaders to listen to KCR.

The reason is – KCR has decided to go national. In a country where politicians are wishy-washy about their ambitions, KCR has come clean on what he has in mind. It is similar to the move made by the late Jayalalithaa in 2014, who through her campaign posters in the Lok Sabha elections that year, made clear that she wanted to be Prime Minister as well. Jayalalithaa would be an encouraging template for KCR as she, in the face of the Narendra Modi wave, bagged 37 of the 39 seats in Tamil Nadu.

The timing, you could say, was however rather strange. Earlier that evening, the BJP had scored an emphatic victory in the North-East and KCR launched into a tirade against both national parties. He announced that he wishes to lead a non-BJP, non-Congress alternative a.k.a. a Third Front at the Centre.

The desire is fuelled by some furious back-of-the-envelope calculation that suggests that if the BJP juggernaut could be stopped at around 200-odd Lok Sabha seats next year and the Congress does not get into three digits, an amorphous Third Front could take a shot at power. A bit like the failed United Front experiment of 1996-98.

While KCR’s dream has been dismissed by BJP and Congress supporters as a flight of fancy, the important question is — why does KCR want to take the Hyderabad-New Delhi flight.

What has gone so horribly wrong between KCR and Narendra Modi that he has become the PM’s harshest critic?

Rewind to November 2016, you will find that KCR was the first non-NDA chief minister to support demonetisation. He backed Modi on GST as well and so steadfast was he in support of the NDA presidential candidate Ramnath Kovind that he did not even agree to meet the UPA candidate Meira Kumar when she came to Hyderabad to canvass for votes.

The reasons now seem to be a combination of ambition, Telangana politics and some serious realpolitik.

ALSO READ:  Despite Many Severe Problems These Slum Residents Vow To Vote For TRS In Malkajgiri Constituency

Both in 2004 and 2009, the then united Andhra Pradesh delivered 29 and 33 Lok Sabha seats respectively to the Congress kitty, enabling the formation of UPA I and II. Chandrababu Naidu is now miffed with Modi for not helping him sufficiently with funds for Andhra, post-bifurcation, and would be a willing partner in any non-BJP, non-Congress formation. The calculation is, if between the two, the TRS and Telugu Desam can net between 30 and 35 seats in the two states, this Telugu axis can be the nucleus of a new political formation.

KCR, too, has his grouse against Modi. The Centre dilly-dallying on giving 12 percent reservation to Muslims in Telangana, the yet-to-be functional High Court, the non-transference of the Bison Polo grounds in Secunderabad to the state government to build a new secretariat, the delayed funds for select projects and the denial of permission to increasing the assembly seats in the state from 119 to 153, are all playing on KCR’s mind.

Likewise, Naidu also wants Andhra’s seats to go up from 175 to 225. This is party thanks to both leaders having admitted a number of turncoats from opposition parties in the last four years and come election time, will find it tough to accommodate so many ticket aspirants.

In the recent past, KCR’s son, Industries minister KT Rama Rao, too has articulated his displeasure against the Centre’s tendency not to think beyond Delhi-Mumbai and South India getting a raw deal when it comes to projects. Now, KCR has taken on Modi over agrarian distress, charging the NDA with not having its heart in the right place. KCR’s critics could charge him with hypocrisy, as Telangana figures in the top three states when it comes to farmer suicides.

But what KCR has done is to create optics. He makes it seem like his task in Telangana is over one year ahead of schedule and therefore, he can claim a promotion. Those in the Congress cry foul and accuse him of playing out a charade. Their contention is that with rural Telangana slipping away from the TRS, this is KCR’s ploy to create an illusion.

The Congress also suspects this is a BJP-sponsored move to weaken the party. If Modi falls short of numbers next summer, it would be easier for him to strike a deal with individual regional satraps like KCR, for whom it may end up becoming a win-win situation. #KhabarLive