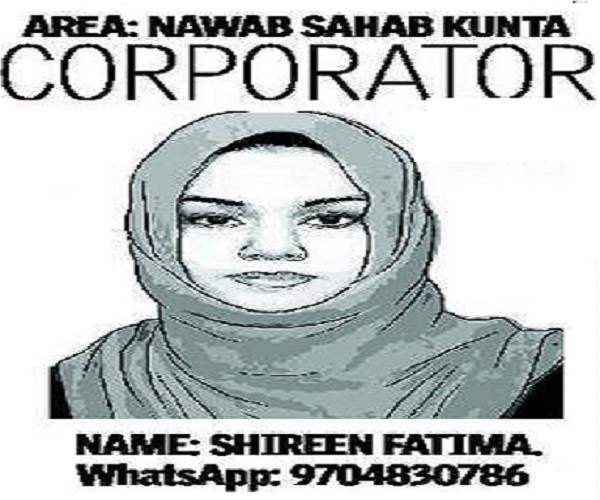 Clad in a burkha and with a scarf covering her head , Shireen Fatima looks like any other woman from the old city. But what distinguishes her from others is that she is a GHMC corporator representing Nawab Sahab Kunta division at the tender age of twenty one.

A pharmcy student of Mesco College of Pharmacy at Mustaidpura in Hyderabad, Shireen attends college and devotes her remaining daytime to ensure overall development of the ward. After nightfall she gets back to her studies. Her father Abdul Hannan, a well-known public figure in the area, guides her in the day-to-day affairs. AIMIM party president Asaduddin Owaisi is her role model. In an interview with #KhabarLive, she outlines her plans for her ward.

What are the main problems in your constituency?

See I represent an area which has many slums. There are quite many civic problems pertaining to sanitation, water scarcity and sewerage. A few storm water drains need to be widened or remodeled.

This constituency have many small areas which still facing the basic issue of drainage and
problem during the heavy rains in 2016 this problem came out as a disaster in those smaller areas which come under Falaknuma, Jahanuma, Hasan nagar, Nawab Sahab Kunta and the neighbouring areas, houses were drowned, waters was entering in the small houses, just because of lack of proper drainage system.

How are you going to solve them?

Along with my father I have prepared an action plan. I will be discussing with the Bahadurpura MLA Mohammed Moazam Khan and then meet the GHMC officials concerned to ensure their redressal. My emphasis will be on development of local government educational institutions.

I will also be writing to officials of various government agencies to increase the manpower allotted for the area so as to attend regular civic works including health and sanitation. People are also requesting for a library and I will take up the issue with the party leadership as a few thousand students will benefit if it is set up.

How will you help improve the city’s infrastructure?

I will cooperate with officials and other public representatives to ensure overall development of the city infrastructure. My main focus will be developing my ward.

Areas which connects Charminar like in the old city Jahanuma, Fateh Darwaza and Doodh Bowli, Shamsheer Gunj and Kalapather have the smallest and conjugated roads with huge number of daily traffic heading towards Charminar.

The process of master planning of the roads which was made even before the previous elections are still going slow.In 4.5 years there is only 20% road winding has completed and the issue is still a issue.

(#KhabarLive starting a series of stories for the betterment of your area and constituency in view of Telangana Assembly Elections 2018.)