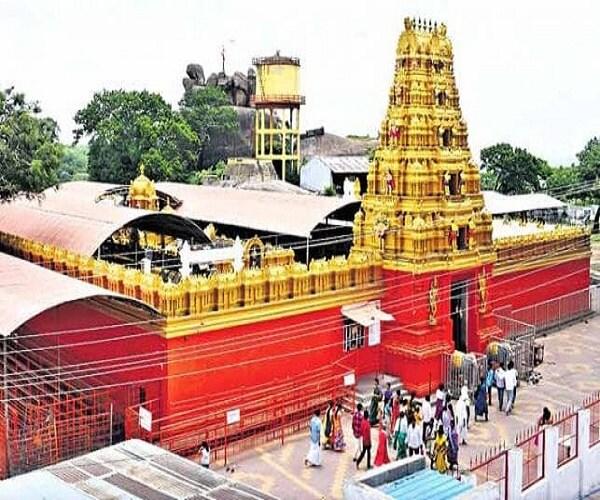 Telangana is a land of beautiful temples, which offer you complete peace of mind and rejuvenate the inner spirit. There are hundreds of temples in the State that are a must-visit owing to their place in history and they are also architectural marvels.

Kondagattu Anjaneya Swamy Temple in Karimnagar is one such famous temple in the State which witnesses thousands of devotees every day. If you are yet to see this temple, then, it is time to pack your bag and plan a trip on a weekend.

Located in the lap of beautiful hills, breath-taking valleys and refreshing water springs, the temple was constructed some 300 years ago. The temple, dedicated to Anjaneya Swamy, resides in the hillock of Kondagattu village of Mallial mandal. Here, one can see the statue of Anjaneya Swamy and stairs have been provided to help visitors go up to view the statue from close quarters.

It is a famous shrine in the State as devotees believe those who do not have children, then they will be blessed with a child when offered puja for 40 days at this temple. Few devotees also have faith that those who have mental disability or other health diseases will be cured, if puja is offered for 40 days.

The temple also houses 45 Dharmashalas for conveniences of devotees and offer a spectacular view surrounded by caves and Rayuni fort on its north. The caves and the fort also offer a pleasant holiday spot. The temple besides the main deity of Anjaneya Swamy also has the idols of Lord Venkateswara, Goddess Alwaar and Sri Laxmi.

According to Telangana Tourism, the story of the temple as per locals dates back to about 300 years ago, when a cowherd, Singam Sanjeevudu after losing one of his buffalo, came to this hilly area while searching for it.

He soon fell into a deep sleep after a tiresome search. It is believed that Lord Anjaneya Swamy appeared in his dream and told him the whereabouts of the lost buffalo, and when he woke up to start searching in the instructed direction, he found an idol of Anjaneya Swamy, who then built a small temple for the lord, the department added.

ALSO READ:  Ola And Uber Cab Riders Are Fed Up Of 'Surge Pricing' And 'Driver Cancellations' In Hyderabad

There are many priests in the temple to perform several rituals that are done throughout the day. The rituals start at the dawn and go on until night. At dawn, the ‘Aradhana’ and ‘Nivedana’ are done which is followed by ‘Abhishekam’ and ‘Sri Satyanarayana Swami Vratham seva’. Prasadam is distributed in the afternoon.

Hanuman Jayanti is the main celebration here and devotees throng the venue to perform Hanuman Deeksha for a period of 41 days. It is believed that lakhs of devotees visit this temple wearing saffron to offer their prayers to the deity during Hanuman Jayanti.

How to reach: Anjaneya Swamy temple is located at a distance of 2 km from Kondagattu bus stand, 14 km from Jagtial bus station, 40 km from Karimnagar and 200 km from Hyderabad.

Karimnagar is well-accessible by road from every city in the State and best way to reach the city is by road. You can catch any bus from Hyderabad to Jagtial or Karimnagar and from there, you will find several facilities to reach the temple.

Haritha Hotel Kondagattu offers delicious food to visitors. It also provides quality accommodation for tourists here with well-maintained rooms, offering all amenities at affordable rates. The timings of temple: 4 am to 8:30 pm.

Nearby places: Jagtial Fort – At a distance of 17 km from Kondagattu temple lies a marvel, Jagtial Fort, in the Jagtial town. It is believed that two European engineers Tal and Jack conceptualised and built this amazing star-shaped fort which is surrounded by water.

Standing out as the structure built by foreign builders, every inch of this unique fort bears a strong similarity to a European castle. Though most of this fort is now in a ruined state, its uniqueness still makes it an interesting site, attracting scores of visitors. Tourists may not be disappointed as the fort still recalls its days of glory with the huge cannons that are scattered throughout the premises. #KhabarLive

Where Are Those ‘Item Girls’ In ‘Telugu Cinema’?

Why ‘Women Political Prisoners’ are Being Tortured in India’s Jails?

‘I Never Ever Seen Such A Vindictive Chief Minister Of AP’:...