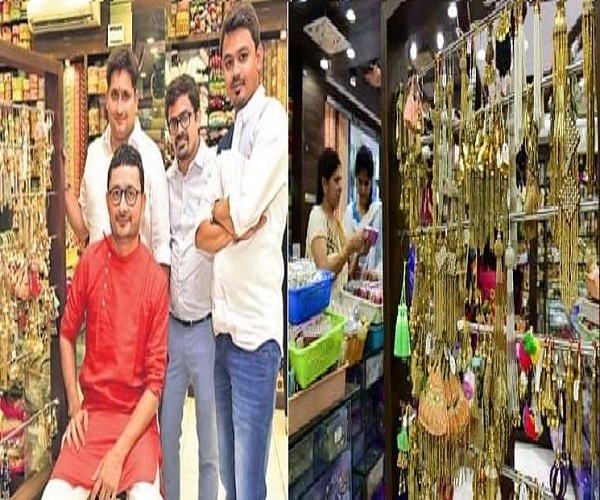 Nestled in the busy bylanes of Ramkote is a 62-year-old lace centre, which has been adding an extra dash of charm to garments. KR Kasat, which resembles a boutique, has been in existence here since 1992, offering a variety of laces and zari material from across India. But it was way back in 1956 that the first shop came up at Lad Bazaar.

KR Kasat came into being when Sitaram Kasat, along with his father Kisan Lal, migrated to Hyderabad from Rajasthan and decided to do something different in an area known for glass bangles. They, therefore, began by selling kundan, chamkis, laces and zari work as these were a big hit among Muslim and Marwari communities.

ALSO READ:  Heera Gold Kingpin Nowhera Shaikh - From Trading In Gold To Launching A Political Party, Her Career Was Full Of Twists And Turns

Now, almost six decades later, the third and fourth generations of the family are looking after the business with the same gusto and spirit.

“What started as a small shop in Lad Bazaar has been transformed into a three-floor building. Sensing the popularity, our father and his brothers opened another outlet almost 35 years later in Ramkote,” shares Arun Kumar Kasat, the fourth generation heir who looks after the Ramkote shop.

But it was Sitaram Kasat’s three grandsons who are primarily responsible for taking the business to this height. After the death of their father Ram Nivas Kasat at a young age of 45, his sons — Om Prakash Kasat, Suraj Prakash Kasat, Vijay Prakash Kasat – took over reins of the business. In no time, the shop at Lad Bazaar expanded from just 500 sft to 2,000 sft. With about 1,000 designs now, the shop is a delight for customers.

ALSO READ:  Why Telangana Minority Welfare Department Is Rich In Budget And Always Poor In Utilization?

Its third branch was opened at Nagarjuna Circle in the city about three years ago. Along with laces, the shop also offers fabrics and other ornaments for enhancing any attire. “It is only when you sit in the shop that you realise the kind of skills required to run a business. Though all of us are well-educated, no college could teach us what we have learnt through experience. From taking care of customers to managing accounts and sales, we learnt from our parents and uncle,” says Arun Kasat.

Going ahead, they are planning to venture into franchisee. Their first store outside Hyderabad is coming up in Warangal in a few months. Smaller cities and towns are next on the radar. #KhabarLive