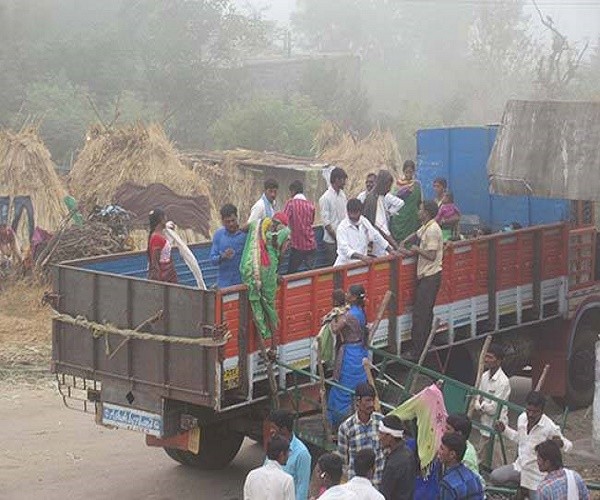 As India’s youngest state of Telangana headed to the polls on Dec 7, a group of labourers from a small, makeshift hamlet near Adlur Yellareddy clambered onto lorries, taxis and any other form of transport they could utilise to head to vote.

These labourers who stay near Gayatri Sugar Factory in the neighborhood of Adlur Yellareddy village belong to the constituency of Narayakhed. They have arranged for transportation on their own, in order to travel over 100 kilometres to reach their home village, to execute their right as citizens.

These labourers have been living in a makeshift, temporary hamlet which was set up about two months ago. They work in sugarcane fields, cutting down sugarcane during the harvest season, to be utilised at the sugar factory. Over 400 workers, each with a minimum of 3 votes, contribute to a significant chunk of the voter population at their home constituency.

The same workers who opted to travel by bullock carts to reach their place of work have pooled in to pay for taxis, cars and lorries to transport all of them to the polling stations, travelling over 100 kilometres to reach the same.

“I have to vote, there is no point in me not voting. It shows my existence,” says 75-year-old Devidas, a second time voter.

“We will come back by tomorrow, we have to get back to work again. I travel to my village and vote like this every time for elections,” states one member from the group, Ganapathy. “Few people come and approach us for voting and even fewer have helped with arranging transport, but largely it is our own efforts taken. We all pool in money and arrange for taxis and cars to get to our village for voting.”

While some of these workers hail from Sirgapur village, several others are from Vasar.

Another young voter set to make her mark is 22-year-old Kavita R, “I don’t have major expectations of this election. Whatever we expect may not happen, but this time I hope that something better comes out if it (elections).”

Speaking to #KhabarLive about the difficulties in reaching their polling booths, 24-year-old Sreenu Jadav, a first-time voter, said, “They (the government) give tractors to farmers to aid them, similarly they should help us by providing bullock carts and other forms of transportation to help us reach our constituencies in time for voting.”

Talking to @KhabarLive about the barriers faced by workers, he noted that if the prices of sugarcane and sugar were to increase, then the workers would in turn also get a hike in their wages and be paid more. He also felt that it was important to pay the workers on a daily basis (daily wages) so that they could tend to their needs.

When sugarcane as a crop does well, worker families comprising of 3 working members at least, make a profit of anywhere from Rs 65,000 to Rs 70,000 for 3 months of work. #KhabarLive

Techie Contributing Towards ‘Hunger’ With ‘One Meal A Day’ In Hyderabad