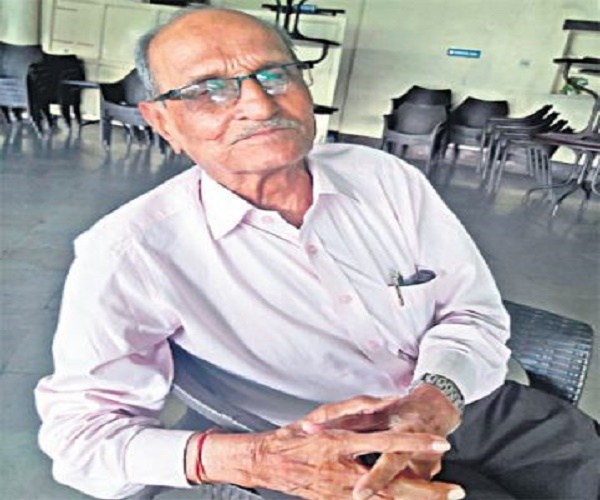 Laugh and the world laughs with you. Weep and you weep alone. But then, laughing is not a joke given the present stressed-filled lives. Even if one finds something funny to laugh about, making others grin from ear to ear is a challenge. But for Daulat Ram, it is a child’s play.

For the last 61 years, he has had people in splits with his particular brand of Deccani humour. “Be the reason someone smiles today,” says the sultan of slapstick. A casual glance will not reveal any humour about him. Courteous, graceful and well dressed, a strict no-nonsense man. That’s the impression one gets at first sight. Scratch the persona beneath Daulat Ram and you realise you have stirred a can of jest. Humour incarnate – that’s what he becomes when turned on.

No, he is not a poet or a writer. And yet, he has contributed in no small measure to the Deccani culture. Contrary to his name ‘Daulat’ Ram, he has no riches. But he is endowed with a rich heart and its richness flows in a continuous stream enriching everyone who comes in touch with him. And over the years, he has become a symbol of Deccani humour.

“Shadi ke liye teherna – jana”, the hopeful query of the blind man in the famous wordy duel between two women at a public tap still evokes laughter. “People want clean comedy and they eagerly look forward to my shows,” says Daulat Ram revealing the secret of his success.

There was a time when he used to hold scores of his ‘Carvan-e-Mizah’ programmes. But now, they have become an annual affair. And they are invariably a big draw. At 81, Daulat Ram wants to call it quits. But on the insistence of friends and fellow comedians, he keeps the show going.

To provoke laughter without joining in it greatly heightens the effect. Daulat Ram does this with effortless ease. Putting on a straight face, he sends the audience into peals of laughter. It is the punch in his jokes and the typical Hyderabadi style in which he relates them that tickles the funny bone. Even the comedy king Mehmood was floored by his diction. After watching his play Pyaz ke Chilke, the latter offered him a role in his film Albela in 1970. Though the film was not a big hit, Daulat Ram’s brief role as son of Tun Tun did not go unnoticed. He held his own with such great comedians like IS Johar, Rajender Nath, Mukri and Mehmood.

His second brush with the make-believe came in the ’80s, but this time it was for the small screen that he acted. Daulat Ram played a villager’s role in Jeelani Bano’s TV serial, Narsaiah ki Bowli. “I am no longer interested in films. I am satisfied with my stage shows,” he remarks.

It was in January 1958 that Daulat Ram burst on the cultural firmament of Hyderabad with a bagful of jokes and mimicry items. Since then, he has never looked back. He doesn’t remember how many shows he has presented till date. It must be in hundreds. But one thing is for sure – there is always something new to look forward to in his shows which have taken him to Kuwait, Muscat, Pakistan, Singapore, South Africa and Malaysia.

Daulat Ram’s lateefe are a legion and have become part of popular lore. How does he create them? Well, he keenly observes what people say and the way they say. He adds a bit of mirch-masala of his own and churn out a funny story. For instance, there was a friend of him who used to say ‘aap ki meherbani se’ after every sentence. See how Daulat Ram narrates their conversation:

There are some little known facts about Daulat Ram. He was born in Hyderabad (Sindh) in 1941. After Partition, he shifted to Hyderabad here to join his father. He had his education at the Kachiguda High School. A born mimic, he used to copy his teachers to the delight of his classmates. Once at the school day function, he played the role of a leprosy-stricken person on wheels to perfection and bagged the first prize.

Encouraged by his talent, Daulat Ram wanted to become a comedian, but his father laughed at the idea. However, he did not discourage him either. “Do whatever you want but bring home one rupee a day was what my father told me,” recalls Daulat Ram. Thereafter, he joined the TR Musial Academy and started giving programmes jointly, and later on his own. His association with the Fine Arts Academy brought him in touch with other artistes such as Hamid Kamal, Habeeb Khadeer, Kamal Raza and Himayathullah. Daulat Ram is greatly influenced by the writings of satirist Mujtaba Husain, and this can be seen in his skits.

Interestingly, the humorous streak in him is responsible for Daulat Ram landing a job in the Government Press, Chanchalguda. Once, along with his artist friend, he presented a progamme at the house of Vittal Rao Ratkelkar, then Director of the Government Press. Ratkelkar liked his performance so much that he immediately offered him a job. The year was 1968. “I owe my job to my talent,” says the artiste.

Daulat Ram, who had his schooling through Urdu medium, speaks the language so fluently that people are left wondering about his real identity. Many of his fans believe ‘Daulat Ram’ to be his stage name. “You have done the community proud like Dilip Kumar. But what is your real name,” they ask not knowing that he belongs to the Sindhi community.

What’s in a name! Ask Daulat Ram and he says how a cruel joke was played on him all because of his name. Once at the dead of night, someone knocked at his door. When he opened the door bleary-eyed, the man greeted and enquired how he was. An angry Daulat Ram shot back “Ye khairiat puchne ka waqt hai mian.” Then, the man requested for Rs 5,000

His father perhaps thought the name ‘Daulat’ will bring him riches. It sure has brought him wealth of a different kind. He has tonnes of laughter and he showers it on people – right, left and centre. #KhabarLive

Hyderabad’s ‘Salafi-Barelwi’ Tussle Needs To Be Contained Before It Turns Into...

Why ‘Flight Occupany’ Is Lowest This Year Despite India’s Booming ‘Air...