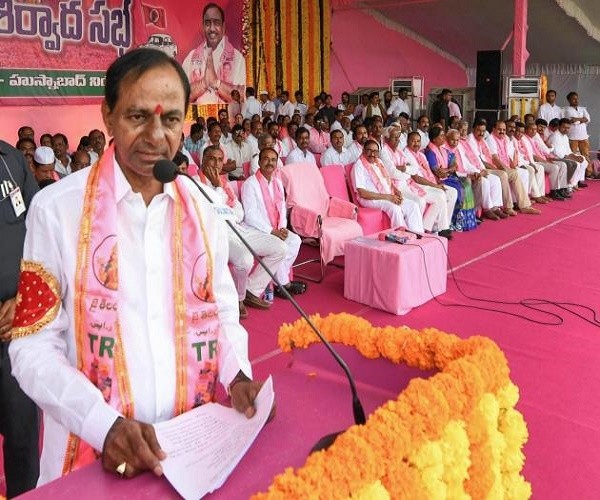 Telangana has now fallen prematurely into the electoral grip. It is due to the decision of the ruling Telangana Rashtra Samiti (TRS) to dissolve the state assembly, nine months ahead of its term. The decision is undoubtedly strategic for many reasons.

First, unlike if it were held in 2019, the early elections in Telangana will be fought on a regional agenda that gives TRS an edge over other parties. In other words, the charisma or appeal of Narendra Modi or Rahul Gandhi will not be factor to influence voting behaviour. Second, the early elections will dilute the anti-incumbency factor if the opposition parties, caught off-guard by the decision, fail to channelise voter discontent. Third, it is an advantage for the TRS, which is prepared over the unprepared and weak opposition parties.

Fourth, TRS has an added advantage of avoiding a consolidated opposition since such consolidation is still at an embryonic stage. Fifth, TRS has a tacit understanding with BJP and AIMIM, as it appears, to avoid the brunt of extreme polarisation to the disadvantage of TRS. Finally, the election machinery of Congress, the relevant opposition party in Telangana, is more engaged in the forthcoming assembly elections of Rajasthan, Madhya Pradesh and Chhattisgarh and thus provides breathing space to TRS for an easy contest in Telangana.

The most surprising thing is that the TRS has announced a list of 105 candidates that includes only two Muslim candidates. It seems that the issue of political empowerment of Muslims has been set in stone, and there is no possibility of any change from the pattern set by the TRS in the last assembly election. Undoubtedly, the deliberate denial of candidature from minority communities is symptomatic of the populist, majoritarian impulse. It casts the very survival of representative democracy, rooted in the idea of inclusive citizenship, in doubt.

ALSO READ:  Why The Parties Switching Into Electoral Mode, Is Modi Govt Planned For 'Jamili'?

Muslims, as per the 2011 Census, constitute 12.68% of Telangana’s population. In the 10 districts of Telangana, Muslims are in sizable presence in five districts, namely Hyderabad (43.45%), Nizamabad (15.35 %), Rangareddy (11.66%), Medak (11.29%) and Adilabad (10.07%). Most importantly, the electoral importance of Muslims lies in the population geography of the constituencies. In 35 of 119 assembly constituencies and in six out of 17 Lok Sabha constituencies, Muslims are strongly placed. A slight change in their vote would impact the electoral fate of political parties in these constituencies. In the present competitive politics, these many parliamentary or assembly seats are a big number for any political party to ignore.

Nonetheless, the representation of Muslims in the 2014 Telangana assembly was confined to eight, including seven from AIMIM in Hyderabad region and one from TRS from Nizamabad. There is only one Muslim MP, that too from Hyderabad. Ironically, despite having a sizable presence of Muslims in a large number of constituencies in Telangana, political parties did not give tickets to Muslim candidates. Similarly, the recent results of the local elections were disappointing as their representation in nagar panchayats, municipalities and municipal corporations, gram panchayats, mandal parishads and zilla parishads is far less compared to their proportion of population.

It is difficult to understate the growing trivialisation of Muslims in the political space of India and its states because the denial of voice to minorities in the political arena is the most striking manifestation of a democratic crisis as it instils disillusionment. Democracy is about allowing people to decide their political fate by means of their participation in the decision-making bodies. But who are those people? Is the idea of ‘people’ in democracy inclusive of minorities or is it the majority alone? Are Muslims not needed to partake in the governance of their own state? Chief Minister K. Chandrasekhar Rao must answer these questions as he claims that his party alone embodies the will of the people of Telangana.

Undoubtedly, the track record of TRS in the last four and a half years in power has not been unfavourable to Muslims. In fact, the party dealt almost fairly with the socio-economic and cultural concerns of the community, which includes revamping of the Waqf Board, declaring Urdu as second official language, IT corridor for Muslims, plan to establish Islamic Cultural Convention Centre, monthly remuneration of Imams and Muezzins, increase in Haj quota, residential schools for minorities, overseas scholarship programmes, the ‘Shaadi Mubarak’ scheme, raising of subsidy component for bankable schemes for minorities, and so on.

Nonetheless, social, economic and political empowerment of a community should not be delinked from political empowerment. The TRS’ attempt to deny candidacy to Muslims in the past and forthcoming rights’ frivolous. This points to an uncomfortable truth: it is easy to be generous with minorities while formulating certain schemes but without conferring actual political power. Sadly, this exclusionary instinct is becoming stronger even among the so-called regional parties as a tool to contain the growth of right-wing fervour in India.

Arguing for fair representation of Muslims in political bodies does not mean to claim that Muslim leaders should speak on Muslim issues alone. This has never been the case. In fact, many Muslim representatives look unfavorably upon the community after being elected. Also, the voices of Muslim representatives are silenced by pressure to conform to existing party norms. Whatever may be the case, the denial of candidacy to minorities is not judicious. The political denial not only disenfranchises the minorities but also deprives India of its classical heritage of promoting diversity and pluralism through participatory governance.#KhabarLive

A ‘Supercar’ From Tractor Maker Mahindra Which Is Not A Mahindra...

A New Initiative By Vizag People To Save Sparrow Campaign