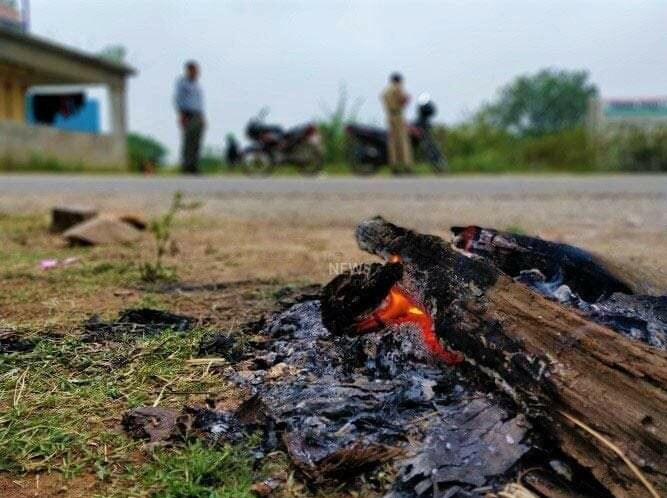 It was the third night that 26-year-old Shekar was spending at Siddulagutta in Shamshabad, in the outskirts of Hyderabad. Shekar, a junior artist, was busy on the sets of a film, which was being shot on Friday evening at a prominent temple.

“Shooting started at around 6 pm. At around 8.45 pm, I decided to go to a shop nearby as they shut early in this area, and that’s when I saw it,” he says, shuddering at the thought.

The charred body of a woman was found in Siddulagutta on Friday night, just hours after the police cracked the rape and murder case of a 27-year-old veterinarian from Hyderabad, whose death has triggered outrage across the country.

It was also found just a few kilometres from Tondupally toll plaza, where the vet was gang-raped and murdered, before her body was dumped 30 km away, near Shadnagar.

“I saw that a few people gathered at the spot. They were all shocked. I went closer to see what happened, and that’s when we saw a woman’s body, still on fire. She was already dead by then,” Shekar recalls. A police patrol car which was nearby, arrived soon, and cordoned off the area.

ALSO READ:  Despite Stringent Laws, Many Duped In 'Lucky Draw Scam' Of Hyderabad

“Even though she was on fire, her body had just frozen. I’ve never seen anything like it. I couldn’t eat dinner after that and I had disturbed sleep. Even now, if I think about it, it makes me shudder,” he adds.

The police said that they were informed about the incident at around 9 pm when witnesses dialled 100.

The police however, said that the woman, identified as Kavitha (35), was a resident of Dhoolpet in Hyderabad and had left her home at 1 pm on Friday.

“Prima facie, it looks like she killed herself. We spoke to witnesses in the area who said that she was sitting in the temple and crying. She told some locals that she was waiting for her family to come and take her,” Shamshabad DCP N Prakash Reddy told #KhabarLive.

The police said that they also got a whiff of either petrol or kerosene in the air when they were shifting the body. A cap, presumably belonging to the bottle in which she carried the flammable liquid, was also recovered from the scene. Forensic teams have collected evidence and sent it for tests.

“We are going through CCTV footage for more clues,” DCP Prakash Reddy added.

The police also suspect that the woman may not be a native of the area, as no missing complaints had been registered with the police stations in and around Shamshabad.

The woman’s body was shifted to Osmania General Hospital (OGH) for a post-mortem.

When #KhabarLive visited the spot, several locals had gathered after watching the news, to get a glimpse of the spot.

“We are in shock. Two deaths so close to our village has left many of us concerned. This road is frequently taken by those visiting the Siddulagutta temple,” says Kishan, a local from nearby Tondpalle, as he visited the spot on Saturday morning.

Others who saw the body being shifted were also troubled.

“When I heard that there was a shoot taking place here, I visited that spot at around 8 pm and was returning, when I saw a crowd at the small temple. I thought it was another shoot and came closer, but I was shocked. The police were already at the spot by then,” says Shankar

“A lot of us are worried. We have never seen anything happen like this before. Now within a few days, two such incidents have taken place. It has made us worry about our safety,” says a woman, who works at Fort Grand, a massive convention centre, just a stone’s throw away from where the incident took place.

The police said that further details would be revealed soon.

On Friday, the Cyberabad police arrested four for the gangrape and murder of a 26-year-old veterinary doctor, a resident of Shamshabad. Telangana Home Minister Mohammed Mahmood Ali said that the case would be tried in a fast-track court. #KhabarLive