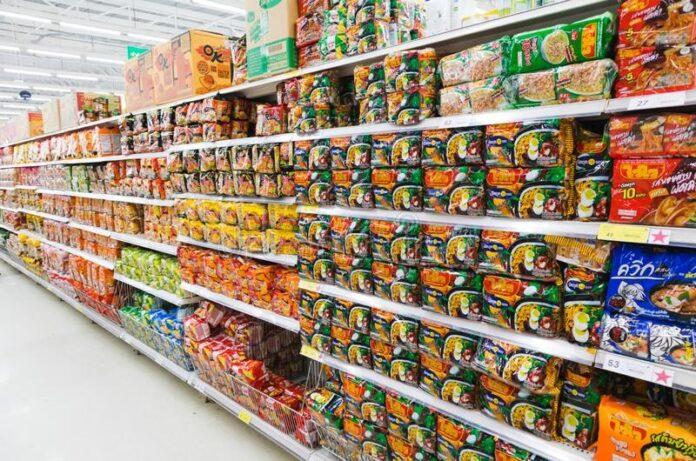 During the COVID-19 lockdown period people across Hyderabad being asked to stay home strictly for the past few days, grocery stores and supermarkets have been crowded with people rushing to stock up a supply of essential items. The favourite food instant noodles of all brands dissappeared from the shelves of supermarkets.

But one food item that has been flying off the shelves for the past week or two has been instant noodles. From Nestle’s Maggi, to ITC’s Yippee noodles and Nissin’s Top Ramen, Wai Wai noodles and Ching’s, several supermarkets across Hyderabad ran out of stock

“Apart from rice and wheat, instant noodles and food packets are being sold the most right now,” a supermarket manager told #KhabarLive.

According to the manager, the demand is highest for Maggi, followed by Top Ramen and Yippee.

“It almost looks like people have looted the store,” a young professional said when she visited the supermarket to buy Maggi at Gachibowli area in Hyderabad.

While Nestle has declined to comment on whether it has seen a spike in sales for Maggi, some distributors have said that there has been a hike in demand.

Meanwhile, sources in ITC said that there is a large growing demand for Yippee noodles. “In fact, after Ashirwad Atta, Yippee is the item with the largest demand at the moment in ITC’s food portfolio,” the source said, adding that the company has ramped up production across its manufacturing facilities for Yippee, as well as its other items in demand.

“A lot of effort is going into the manufacture and in trying to ensure items reach the market with lesser people working since food is an essential commodity,” the person added.

Radha Krishna, a distributor, who is also a member of Federation of All India Distributors Association (FAIDA), said that there is an increase in demand for instant noodles.

“Yes, there is an increase in demand for instant noodles because the situation is like that. There is a demand for all readymade and packaged foods. Till last week, we have been able to manage the demand. What is going to happen this week, nobody knows. Most of the FMCG (Fast-moving consumer goods) distributors are enforcing lockdown from today,” Radha Krishna said.

Another distributor, who distributes for Nestlé products, said that there is always a high demand for Maggi but is not sure if there has been any special demand in the last few weeks. However, he says that several orders are coming now but they aren’t able to supply since Maggi is not an essential item.

However, many distributors denied there being any unusual spike in demand. #KhabarLive

Beware Of Using Mobiles And Gadgets During Lockdown Period

Why ‘Polio-Virus’ Contamination Scare In Telangana?