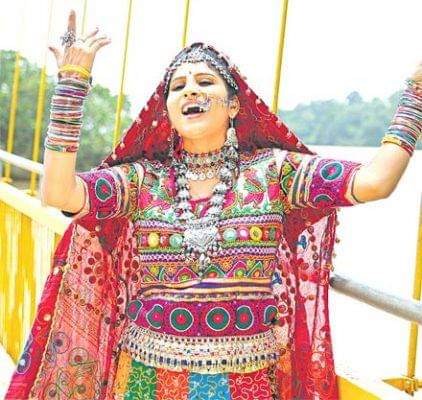 The name Satyavathi Chowhan may not ring a bell, but say Mangli, and people know who you are talking about. Matakar Mangli aka Satyavathi nurtured a passion of teaching music, but she became a singer instead. Destiny played a big part in who she is today.

Mangli recalls how as a young child, she would travel 10 kms for water and hum Banjara songs on her way back. “It wasn’t easy to do what I wanted. In our community, it’s not unusual for girls to get married when they turn 13. My father faced a lot of ridicule for enrolling me in a music institute.

ALSO READ:  The #MeToo Movement Marks The Rise Of A New Era In Indian Feminism

But, he encouraged me to follow my dream,” says Mangli who learnt Carnatic music in Tirupathi. Eventually, she started working in a news channel, where she got a chance to visit many countries as part of work and gave many stage performances. From there, serials came calling and she soon found herself working for Mic TV which is popular on YouTube.

“I became an actor by chance, professionally I have always been a singer. Damodar Reddy who is the programme producer recognised my acting talent and gave me life,” says Mangli who catapulted into the public eye after she sang the ‘Bonalu’ song. In the track, she sang and danced balancing a pot on her head. “Bonalu is always special to me. Balancing a pot is in my head. Banjara women learn the pot dance from their childhood.

Folk icon of TelanganaLinga Srinivas was my guru who taught me how to dance when I was in the 7th standard,” shares Mangli, adding, “Everything I learnt became an experience for me which trickled into my profession. I’m always happy to work on festival-related songs. My new Bonalu song offering prayers to the goddess has almost crossed 32 million views and is still trending on YouTube.” Mangli who is most known for her unique style of singing.

She as her own way of singing, especially with Telangana songs and is a regular fixture at programmes like Bathukamma, Bonalu, Sankranti, Ugadi,and Sammakka Sarakka Jatara, etc. Adding to her already impressive resume is the new track she sang for for Shailaja Reddy Allude film which was a hit as well. #KhabarLive