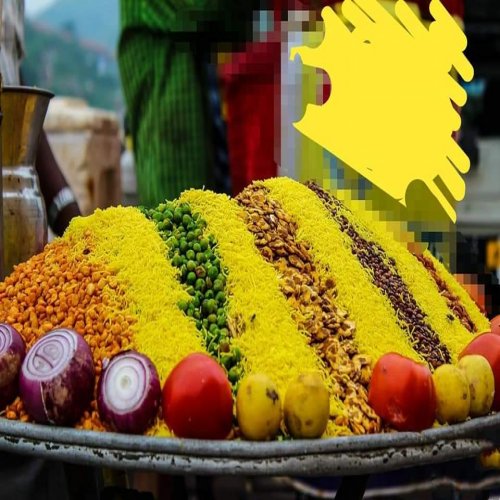 Ram Mohan Singh is 42 years old. He sells biryani by day and momos by night near DLF Cyber City area in Hyderabad, but he now hands out his plates through partitions in the plastic sheets that ensconce his cart.

He has also kept a separate table nearby, from where customers can collect food, to ensure maximum social distancing. But he only gets about 25 customers in a day now anyway, as opposed to 70-80 before coronavirus struck and the lockdown was announced.

Despite several restrictions being eased and the process of ‘unlocking‘ well under way, street food vendors across Hyderabad continue to struggle. This is not surprising, given that Covid numbers in India are on the rise, and many people are still staying home as much as they can, venturing out only for essential activities. Add to that the fact that street food such as chaat, gol gappa and aloo tikki are all contact-based food.

Yet, Ram Mohan Singh and many other vendors are taking pains to ensure the food they serve is safe and sanitary. Despite the fact that they stand out in the heat all day, they are conscientious about wearing their masks and gloves and have even taken on additional costs to ensure food hygiene.

“I have introduced new disposable packaging for the food. Now, I serve in silver foil containers that cost about Rs 5-6 a piece. Before I used to serve on disposable plates that cost Rs 2,” Singh tells #KhabarLive.

Singh is one of 1,500 street food vendors across Hyderabad who have completed digital training on Covid-19 food safety guidelines, facilitated by the Food Safety and Standards Authority of India (FSSAI) in partnership with the National Association of Street Vendors of India (NASVI). Many like Singh have received a food safety training and certification (FOSTAC) that they display on their carts or stalls.

According to Sangeeta Kumar, head of the street food programme at NASVI, the certification is the first step. “The training, which includes two- to three-hour Zoom sessions spread over two days, focuses on food hygiene and Covid precautions. It has already given vendors confidence and they are getting a good response,” she explains to #KhabarLive. However, there were limitations such as many vendors not having access to smartphones, and the FSSAI only being able to train 100 vendors per day.

Sangeeta says the training kept street food vendors occupied during lockdown since they were excluded from Union Minister Hardeep Singh Puri’s advisory on 3 April that made allowances only for vendors selling fruits, vegetables and groceries. NASVI had appealed to Telangana Chief Minister KCR in late March to allow street food vendors to help the government provide cooked meals to the public, which would in turn help them earn an income, but it did not receive a response, she said.

According to Sangeeta’s estimates, there are more than 1 crore street vendors across the country, of whom 30 per cent sell food. Though 1,500 are now FOSTAC-certified, the vast majority seems to have abandoned businesses or are on the brink of doing so.

After selling daulat ki chaat and gol gappas in Delhi’s Restaurant in Charminar area of Hyderabad old city for 30 years, 45-year-old Khempal Singh returned to his hometown of Moradabad in Uttar Pradesh on his motorcycle shortly after the lockdown began.

“Anyway, the season for chaat starts after 15 October and my shop has been closed since Holi. I could have stayed and sold gol gappas but that didn’t look promising,” he tells #KhabarLive. Singh is unsure whether he will return to Delhi and resume his business.

The situation is so dire that even one of the most famous chaat vendors, Dalchand Kashyap, who featured in an episode of Netflix show ‘Street Food: Asia’, is biting his nails. Despite receiving his FOSTAC certificate, which he has displayed on his chaat stall in Madhapur area in hi-tech city in Hyderabad, Kashyap says he makes about Rs 3,000 a day, a huge drop from his earlier earnings of Rs 10,000. “It’s the fear. People don’t want to come out no matter if we wear masks, gloves, use sanitiser or have a certificate up in front of our stall. My business got a leg-up after the Netflix show, but that doesn’t make much of a difference now.”

But there are people who would love to see their favourite street food stalls back in action and thriving. A software professional, Vinay Chandnani tells #KhabarLive that he believes the fear and paranoia surrounding street food may stem from “anti-poor sentiments”. He says, “I personally miss going to Dadu’s Chaatwala in Himayatnagar. My mom and I love going there to chat while eating pani puri after pani puri. I also miss going to the omelette and pav wala near Secunderabad station. He was always open on nights but I don’t see him around anymore.”

College student Tarini Reddy has actually been out to visit her favourite vendor after the lockdown was eased. She says, “Having moved from Vizag to Hyderabad, the one person I missed the most was the kachori and aloo-ki sabzi wala in beach road in Vizag, that I’ve been going to since I was a child. I visited him with my mom last week and he immediately remembered us. We’re loyal customers.”

The future of street food
But it wont’s be easy. Rajkumar Jain, owner of Karachi Sweets in Jubilee Hills, which used to throng with customers, says the popular shop now receives just about 15 customers in a day. “I don’t see the business bouncing back for at least one year,” he says, ruefully.

The shop, first established in 1990, is on Jain’s family property, so rent, fortunately, is not an issue. But the business has suffered not just from loss of demand, but loss of labour as well, after 50 of its 70 employees returned to their native towns over the last three months. Jain says he had 4 shops in Hyderabad itself, of which he had to close 3 as they were unable to make “a single sale in an entire day”.

While NASVI is in talks with Swiggy, Zomato and other food delivery platforms to initiate home delivery for street food vendors, Jain is skeptical. “Why will people want to spend the extra buck on home delivery? And the whole point of street food is to be on the street when it is served to you,” he says, questioning whether street food will be redefined in a post-Covid world. #KhabarLive #hydnews #innlive