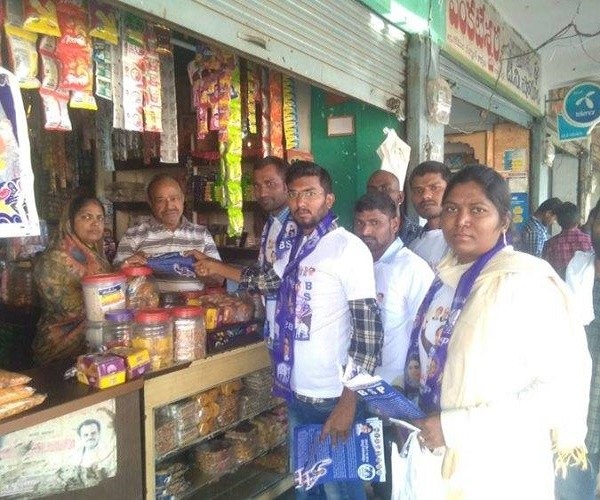 Thirty three-year-old Kashmeni Satish, a resident of Australia, has taken a 20-day leave to visit India – not for a vacation, but to volunteer for the election campaign of Bahujan Samaj Party candidate from Chennur, Sujatha Surepally.

Satish, a native of Rajanna Sircilla district working as an IT professional in Melbourne, says he is on unpaid leave because he wants to campaign for his idol, Sujatha.

“I admire her a lot and seek inspiration from her. I don’t know her very personally, but I follow her on Facebook and since then I admire her activism against the corrupt practices.”

When asked what pushed him to come all the way from Australia, he says, “Politics has become corrupt and corporatized, so I wanted a change in it. Sujatha ma’am was a hope for change. I have been pressurizing her to come into politics for long, and it only would be fair, if I do my bit and volunteer for her.”

It is not just Satish, who has been campaigning for activist-academician Sujatha Surepally – several students from Osmania University and Jamia Millia Islamia University, as well as civil rights activists, local youth and Dalit leaders, have been participating in a door-to-door campaign seeking people’s votes for Sujatha.

“I am not able to accommodate these people,” laughs Sujatha, adding, “anticipating more volunteers, I have even rented out a house in Chennur. I am receiving calls from several people, saying that they’ll visit Chennur to campaign on my behalf.”

Overwhelmed by the support, Sujatha says excitedly, “My campaign is going full throttle.

Activist Kongari Aruna Queen, who is also part of the campaign, says, “After achieving statehood, all the public figures who earlier were very vocal became mute, including Dalit intellectuals. It was only Sujatha ma’am who led struggles against caste atrocities in the state, whether be it the Manthani Madhukar issue or the Abhangapatnam incident.”

Aruna adds, “I want to see Sujatha ma’am in the Assembly, raising questions about these issues and be the voice of the people.”

Sujatha Surepally, who teaches Sociology at Satavahana University, is a Dalit professor, who led several struggles for human rights and women’s rights. After Telangana’s formation, she was at the forefront of protests against caste atrocities through her organization—Bahujan Prathighatana Vedika.

Another student from Osmania University, Dudapaka Naresh, president of the university’s Dalit-Minority Students’ Association, says, “TRS and Congress can never speak for Dalits or Muslims. The Dalit and Muslim candidates fielded by them are just token representatives, who actually don’t speak for the community. Only alternative parties like BSP and MIM can ensure fair political representation of Dalits and minorities.”

“Chennur has remained so backward. For three years, Nallala Odelu was elected but there has been no proper development in this constituency. There are neither any hospitals nor proper public infrastructure. I truly hope that the people of Chennur realize this and vote for a ‘change’,” Naresh adds.

Chennur is one among the 19 SC reserved constituencies in the state. However, Sujatha faces an uphill task of winning against the TRS and the Congress candidates. On behalf of TRS, Pedapalle MP Balka Suman is contesting from Chennur and Borlakunta Venkatesh Netha, former Excise Deputy Commissioner is representing the Congress. #KhabarLive

Election Code Order In Telangana Leaves KCR With A Pile Of...

‘No Work, No Vote’ – People Sending Back TRS Candidates From...