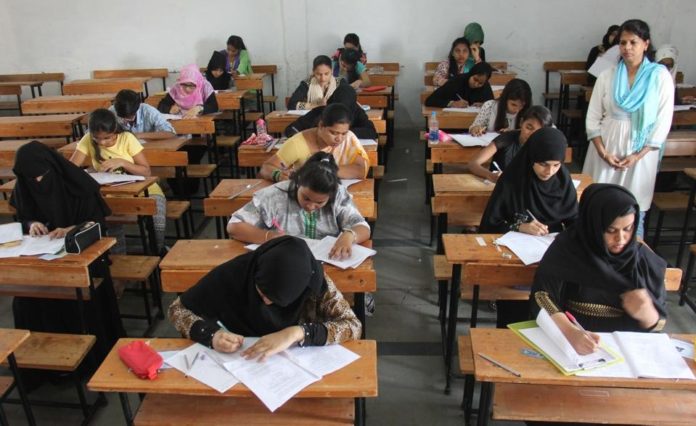 It is examination time but strangely it is not students but teachers who are facing the blues. Invigilators in several Osmania University affiliated colleges are having a tough time conducting the examinations. Aggressive behaviour by examinees coupled with outside interference has reduced the examinations to a farce.

Mass copying and impersonation is said to be rampant in several colleges. Everyone including the principals and invigilators are aware of the problem but it is a question of who should bell the cat. Under intense pressure from the student groups, the examiners prefer to turn a Nelson’s eye.

The other day, an invigilator at Nizam College had his cell phone smashed when he objected to a student cheating in the exam hall. Another faced a shower of choicest abuses when he tried to discipline a student.

The undergraduate and postgraduate exams of Osmania University which commenced on November 26 are scheduled to end on December 15. Everyday, the flying squads are detecting scores of cases of mass copying but no action is being taken for fear of backlash from the students.

Two invigilators at the Nizam College – caught 31 students for cheating on December 7. After seizing the answer scripts, they handed them over to the Principal. But there was no action from the latter, it is said.

There are also reports of widespread impersonation. Recently, a girl was found writing the exam for a boy but shockingly no action was taken. The Arts College in the OU campus is also not free from this menace. Malpractices take place right under their nose and yet the invigilators tend to look the other way. “Without administrative backing we feel helpless,” says a professor.

When a student is caught cheating, the chief superintendent is supposed to take some action. But this seldom happens. More often than not the matter is allowed to fizzle out without reaching its logical end. Reason, no one wants students to gang up against them. Buy peace by ignoring is the thumb rule.

This drift in the examination system is attributed to the weak leadership. The Telangana movement has only aggravated matters – emboldening the students in the process. Even if the university books the erring students for malpractice, the police are slow in taking action, it is said.

Things have come to such a pass that a law and order situation is feared in the Osmania University when the Ph.D admissions are finalised. The university authorities are said to be under severe pressure to admit the students setting aside the guidelines.

Can the rot be checked? Yes, if the administration cracks the whip to send a strong signal. But the leadership, many feel, has no academic concern. Only short-term goals. #KhabarLive

Where Is Modi Govt’s Financial Inclusion Of ‘Jan Dhan Yojana’ With...

Why RSS Diffused The ‘High Voltage Ayodhya Campaign’ Till The ‘Lok...