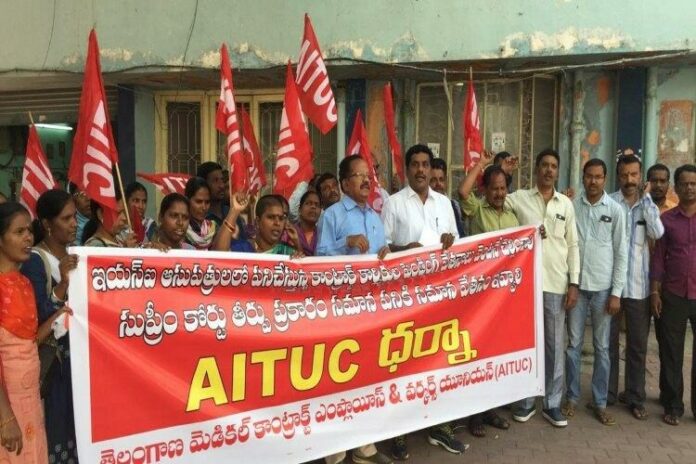 The union said that they issued a notice for the strike on November 7. “If the government does not pay our dues, we will go on an indefinite strike from November 22,” said TMCEWU president MD Yousuf.

Yousuf said that besides clearing the dues, they want the government to implement the High Court’s order of ‘equal wage for equal work’. “The Court earlier this year said that all the contract employees who have been working for 10 years should be made permanent employees. However, the government is yet to implement this. It is unfair,” Younus said.

M Narasimha, TMCEWU secretary, said, “We have made several representations earlier, asking the government to release our pending our salaries. But the government did not pay heed. How can we work without salaries?”

According to the union, there around 1,000 contract employees working across the state, who are sustaining themselves by taking loans due to non-payment of salaries.

“We have given notices to the ESI director and the labour department. If the government doesn’t respond, we will boycott our duties and go on an indefinite strike,” said Narasimha.

The contract women employees claimed that the government is not treating them equally. “We are entitled to five days of special leaves, just like the permanent employees, but we are given just 23 leaves yearly against the mandated 35 leaves. The government should acknowledge this, and treat us equally,” said a woman protester.

Apart from the medical contract workers, the Telangana State Road Transport Corporation (TSRTC) workers are also protesting demanding the salaries for the month of September and October. But the TSRTC has stated that they don’t have any money left to pay the pending salaries.