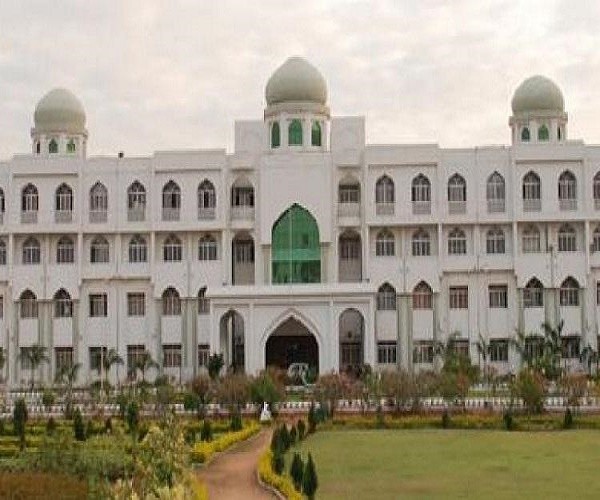 The #MeToo movement against harassers in academia began last year after a curated list was released by student and lawyer Raya Sarkar. Now, two students from Maulana Azad National Urdu University in Hyderabad have come forward with allegations of sexual misconduct against the Head of Journalism Department, Ehtesham Ahmad.

Tasleem Begum, a student of the 2017 batch of the Mass Communication and Journalism course, said she refused alleged sexual advances towards her by Ehtesham last year. “It all started with the HoD, Ehtesham Ahmad, asking me to meet him outside the university, privately. He even offered me money in exchange for sex if I meet him. I did not know how to react, did not raise any complaint and started avoiding him,” Tasleem, who is from an economically poor background, alleged.

Tasleem’s father works as a fruit vendor in the streets of Hyderabad, she is the first woman in her family to attend a university. “Ever since he made such an advance, even if I wanted an out pass from the hostel I would meet him only in the presence of people. I would take effort never to be in the same room with him alone but then he started noticing that I was avoiding him,” she said.

Following the alleged misconduct, Tasleem claims that Ehtesham started turning students and faculty against her by spreading misinformation that she was a person of ‘bad character.’ That claim had violent repercussions for Tasleem when another student allegedly attacked her on university premises in November 2017 because of her so-called bad character, she said.

“I raised a complaint with the university the very day, but the university officials told me not to raise a police complaint. But a few days later, myself and the student got suspended for indiscipline. I went crying to the HoD and requested him to revoke the suspension but he told me this is what happens to those who do not listen to him.”

Tasleem and the student who allegedly assaulted her were both suspended over indiscipline in December for a one-year period. At the time of the suspension, Tasleem had tried to reach out to the university vice-chancellor, Aslam Pervaiz, but he refused to meet her. “They didn’t even let me into the office.”

She then approached the Raidurgam Police station to file a formal complaint about the assault. “I told the police everything, they called the HoD and the university discipline-in-charge to the police station. The police told me not to file a formal complaint and further escalate the matter. They talked to the university officials and got an assurance for me that they would allow me to write my exams.

But after the exams started, the police told me the Head of Department and Vice Chancellor are not agreeing to allow me to write the exam. The police only took my complaint verbally. I only know Urdu so the police were typing as I narrated my complaint, they wrote it down but then they said take the matter lightly and not file the complaint officially,” Tasleem said.

ALSO READ:  What's The Change For 'DTH And Cable TV' Consumers From January 2019?

She then approached the State Human Rights Commission in April 2018, the matter is still pending with the commission. Now, Tasleem says she has to prove her mental stability to get reinstated.

“My suspension should over in a month but the university officials say I am mentally unstable and that I have to get a medical certificate from a government doctor saying that I am mentally fit. They just want some reason to ruin my life, I will definitely prove to them that am mentally stable,” she alleges.

However, this is not the first allegation of sexual misconduct against Ehtesham.

Khush Nawaz from Jammu and Kashmir was a student at the mass communication department from 2014-16 and alleges that Ehtesham misbehaved with her while she was at his office discussing an internship. “He asked me to come to his office to discuss about the internship. He was telling me that he has contacts at high places and could help me get find better internships than the one I got.

We were alone in his office and there was no one nearby, he then gets up from his seat comes close to me and started touching me inappropriately. I pushed him away and shouted at him. When I told him that I would raise a complaint, he tells me who would believe me?” she claims.

“My only regret is that I did not raise hell back then, else someone like Tasleem would not have to go through this. I feel guilty of doing nothing,” said Nawaz.

Both the women had raised complaints to the university’s Internal Complaints Committee (ICC), but nothing came off it. “Just like how Tasleem was harassed and eventually suspended, I also was harassed. There were eight witnesses who were ready to testify to the ICC about the various instances where Ehtesham tried to harass me. All of them got Rs 1000 penalties and their parents were told that their children are not performing well,” Nawaz alleges.

The MANUU chancellor, Firoz Bakht Ahmed, is aware of these complaints and feels helpless over the situation. Though he is technically in a position of higher authority, he notes that the vice chancellor wields greater power in the university.

“I confronted the VC about these allegations and various other issues such as embezzlement of funds, nepotism in appointments and transfer and suspension of those raising their voice against wrongdoing in the campus. I have written to the President of India, the UGC and the PMO on what is happening at the university,” said Firoz, whose confrontation with the VC ended up with him getting banned from entering the university other than for giving out certificates on convocation day.

“I have requested the PMO and the UGC to launch an enquiry into the what is happening at the university, but it could take a few months or even not be taken up due to upcoming general elections,” he added.

The university VC, Aslam Pervaiz was unavailable for a comment on these allegations. #KhabarLive

Abandoned ‘Railway Quarters’ Becoming A Den For Anti-Socials In Secunderabad