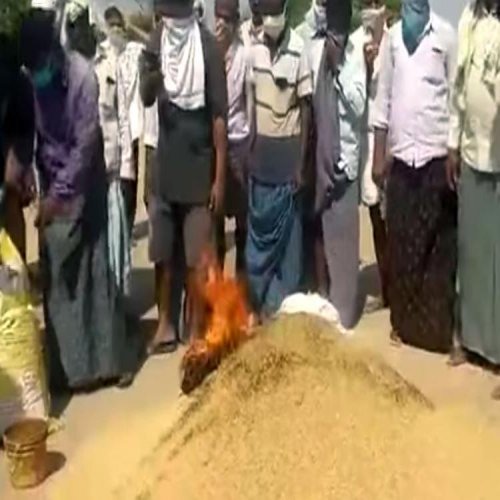 Paddy farmers in Telangana are up in arms against rice millers who are allegedly cheating them by depreciating the weight of their crop.

Farmers are urging authorities to intervene in order to prevent rice millers from allegedly trying to tamper with paddy weights in various parts of the state. On Thursday, several farmers in Thangalapalli of Laxmipur in Sircilla district set their crops ablaze to protest the situation with rice millers. In Jabithapur of Jagtial district, farmers staged a dharna on Peddapalli highway, alleging that there was a delay in paddy procurement.

According to farmers, they are facing a two-fold loss — one round of depreciation in the crop at procurement centres and later at rice mills. There is also a loss in quality and weight due to humidity, they say. The humidity referred to is a factor taken into consideration when the price is fixed for paddy. The weight of water content is taken into account, and till 17% humidity is considered to be A grade crop. Humidity above this percentage is considered to be regular and the price level drops.

The Telangana government will purchase paddy with up to 17% humidity, and is offering Rs 1,835 for A grade crop and Rs 1,815 for regular crop. The state has set up as many as 7,700 procurement centres.

Citing better irrigation facilities, the government said that the state has seen a massive increase in paddy cultivation compared to the Kharif season. With the lockdown making it difficult for farmers to travel to sell their crops, the Telangana government has said that it will procure all the paddy in the state.

“We will buy every last grain,” Chief Minister K Chandrasekhar Rao had declared at a press meet earlier this month.

However, Vaasu Karthik, a young farmer from Sirikonda in Nizamabad, said that rice millers are framing their own conditions for paddy procurement. He said that farmers are losing out on 2-3 kgs in a 40-kg bag and 4-5-kg per quintal bag.

Several farmers have already taken the matter to the notice of Nizamabad rural MLA Bajireddy Govardan and Lok Sabha MP Arvind Dharmapuri. Arvind has also written letters to Nizamabad and Jagtial Collectors to ensure that farmers don’t face losses due to indiscriminate depreciation by millers.

Dr Dasoju Sravan Kumar, national spokesperson of the Congress, alleged that only 4,380 procurement centres have been set up and that even those aren’t functioning properly, contrary to the government’s claims. He further urged the government to ramp up paddy procurement to a much higher level to fulfill its promise.

The Telangana BJP has also launched a protest against the state government, alleging negligence in addressing the problems of farmers. BJP state unit president Bandi Sanjay and other leaders staged a day-long fast in party headquarters while others fasted in their respective homes. #KhabarLive